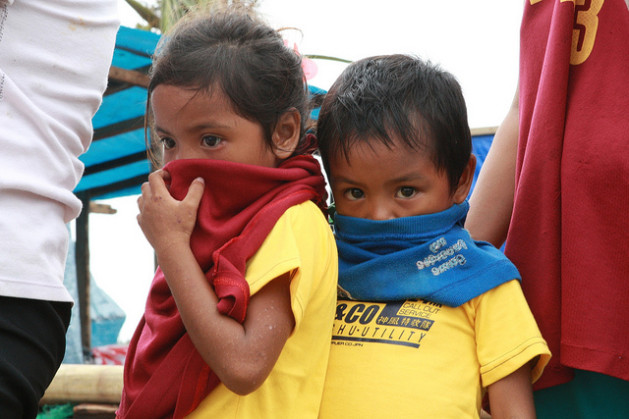 UNITED NATIONS, Dec 23 2013 (IPS) - Since Typhoon Yolanda made landfall in the Philippines on Nov. 8, the country has sent holders of its debt close to one billion dollars, surpassing, in less than two months, the 800 million dollars the U.N. has asked of international donors to help rebuild the ravaged central region of the archipelago.

Even as the Philippines goes hat in hand to wealthier countries seeking disaster relief, it continues to diligently pay creditors in those same countries millions of dollars every day – much of it interest on debt that can be traced back to the corrupt regime of Ferdinand Marcos (1965-1986) , Cold War ally to the West.

“We think it is always a bad idea and unjust to respond to a disaster by lending money." -- Tim Jones of Jubilee

When Philippine President Benigno Aquino III announced last week the staggering cost of rebuilding from the storm, the price tag – 8.17 billion dollars – and a pair of emergency loans to help meet that goal distressed debt reduction campaigners in the country who have for many years called for a cancellation of illegal debts.

“Every dollar of funding assistance will be used in as efficient and as lasting a manner as possible,” Aquino assured reporters. “The task immediately before us lies in ensuring that the communities that rise again do so stronger, better and more resilient than before.”

Yet every 12 months, the Philippines transfers to lenders nearly the same amount Aquino hopes to raise for reconstruction. And because Filipino law privileges the payment of debt over all other expenses, those installments could end up eating into rebuilding funds.

Even before the storm, education and healthcare spending in the country fell well short of global benchmarks; one in five Filipinos live in poverty and over 15 million are malnourished.

As the storm’s damage became clear, Aquino rushed to the World Bank and Asian Development Bank (ADB), both of which quickly inked 500-million-dollar emergency reconstruction loans and several small cash grants of less than 25 million dollars.

“From now until December 2014 we will be preoccupied with critical immediate investments such as the rebuilding and repair of infrastructure and the construction of temporary houses,” said President Aquino.

But the Philippines suffers on average seven to eight typhoons annually and climate change models predict storms like Yolanda will become more commonplace in the future.

Yolanda was the strongest storm ever to make landfall, lashing the central coastline with sustained winds of 195 mph and storm surges of several feet. More than 8,000 were killed or left missing and four million were displaced. Before-and-after images of Tacloban show on the left a burgeoning city, but on the right an indecipherable mass of rubble, as if a hydrogen bomb has gone off.

Reyes says it would be bad enough if the wealthy countries that the Philippines owes for deals like the Bataan nuclear plant were weren’t also the ones responsible for the vast portion of climate change gases released over the past 150 years.

At the UN Climate Change Conference in Warsaw that began just days after the storm hit, Yeb Sano, leader of the Filipino delegation, went on a hunger strike, holding out for substantial promises for a system of payment from those who instigate climate change to those who suffer from it.

Eventually the outlines of such a scheme was agreed up, but the “Warsaw Mechanism,” will require further definition and, vitally, the cooperation of countries that would stand to pay into any reparations regime.

A similar void exists where an international mechanism could allow countries to examine debt or declare bankruptcy, much as companies and municipalities already can.

It is in this space bereft of clues that the Philippines attempts to rebuild.

“Debts that should have been cancelled years ago are limiting the country’s capacity to respond and prepare for future emergencies,” says Jones. “Action on this is clearly needed before any new debts are added.”

“We think it is always a bad idea and unjust to respond to a disaster by lending money,” Jones told IPS.

The U.N. Framework Convention on Climate Change prohibits climate-related investments from increasing the debt of a country. But the statute is ignored in emergency situations.

If the tomorrow predicted by climatologists is already here, ask activists, what can be considered “critical immediate investments?”

As financial and climatic “crisis” insinuates itself into the everyday, temporary measures that further indebt nations can easily morph into long-term palliative care for the world’s most vulnerable countries.

“The logic of the loan, if there is any, is that the money is lent so the money can be repaid, and by definition that cannot happen in the context of a reconstruction loan,” said Jones. “What sticks in the throat even more is when the World Bank and ADB present these amounts as aid.”

Though the Philippines has made progress in reducing its debt burden over the past decade – in large part due to one-time payments from wide-scale privatisations – the country may find itself in a similar state of climate-induced paralysis as soon as the next typhoon season.

President Marcos, who is said to have stolen as much as 10 billion dollars during his 21-year rule, borrowed 5.5 billion from the IMF and World Bank and a further 3.5 billion through bilateral deals with foreign governments.

Among the many fraudulent agreements Marcos was able to skim from were a set of U.S. loans earmarked for a Westinghouse-built Nuclear Power Plant on the Baatan peninsula. The structure, which was eventually built along a seismic fault line and next to a volcano and would cost the Philippines 2.3 billion dollars, never produced a single watt of electricity – though it did help finance Marcos’ wife Imelda’s infamous collection of over 3,000 pairs of shoes.

In 2008, the Philippine Congress suspended payments on 11 “illegitimate loans,” only to be reversed by then president Arroyo, under pressure from the IMF and fearful of interest rate repercussions.

Again, in 2011, Congress attempted a debt audit, but the committee chairman was quickly dismissed by President Aquino.

“They don’t want a precedent to be set,” said Jones.

Multilateral lenders, larger and more easily tracked than private bondholders, fear a forensic analysis of the debt could unearth billions in illegitimate loans, opening the floodgates for cancellation. Governments, for their part, fear that unilateral targeted defaults would be punished severely by investors.

Both the World Bank and ADB have been financially supportive – through both grants and loans – of innovative cash transfer schemes and climate change mitigation programmes in the Philippines. But neither would comment on questions of climate reparations or of a debt audit in any form.

“It is critical that reconstruction begins quickly to minimise the economic impact and more importantly to reduce the hardship for people, especially the poor and vulnerable,” said Van Den Brink.

Though the loans offer grace periods of between eight and 10 years and yields barely above interbank rates, they are nonetheless debt, says Ricardo Reyes, president of the Freedom from Debt Coalition.

“Filipinos are being asked to pay without any consultation,” Reyes told IPS.

Reyes is one of many activists who, following Marcos’ overthrow in 1986, turned their attention to what they saw as his lasting legacy – a severe debt overhang made possible by complicit Western governments.

“The conversation of those in government after Marcos has been the same: ‘rely on foreign loans’ was always a mantra for them,” said Reyes. “I think taking these loans is a fatal mistake.”

Asked to what extent the Philippines’ debt could be tied to corruption, a spokesperson for Finance Secretary Cesar Purisima told IPS, “It is difficult to make a guess, your guess is as good as mine.”

But efforts to do more than guess have been successful elsewhere.

In 2008, Ecuador carried out an extensive audit of its foreign debt and decided to default on 3.2 billion dollars of loans. That decision, at the height of the financial crisis, was timed propitiously and the country recently announced plans to return to the international bond market in 2014.

“Economically and morally it is outrageous for the Philippines to be paying so much out of country in debt payments when it’s been hit by this disaster that’s been influenced by carbon dioxide emissions from the richest countries in the world,” said Jones.