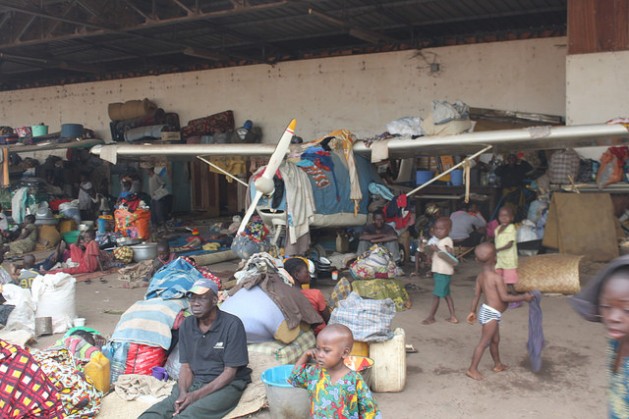 Over 900,000 people have so far been uprooted from their homes since the conflict in CAR escalated. Close to half a million are in the outskirts of the capital Bangui with 100,000 taking refuge at the airport. Credit: © EU/ECHO/Pierre-Yves Scotto/cc by 2.0

UNITED NATIONS, Jan 30 2014 (IPS) - Reports of horrific revenge killing continued to emerge from the Central African Republic Wednesday, less than 24 hours after the Security Council voted to increase the international troop presence there and levy sanctions against those it suspects of war crimes.

Over 2,000 people have been killed and one million – a quarter of the population – displaced since a coalition of northern, predominantly Muslim rebels calling themselves Seleka (“alliance” in the local Sango language) seized power in March 2013.

“Today, two men were killed in the street - one had his head cut off. They were cut to bits." -- Joanne Mariner

Following the deployment of peacekeepers and the resignation of president and former Seleka leader Michel Djotodia earlier this month, the group began a hasty but violent retreat from the capital and several contested rural towns.

Violence against the Christian community was highest in early December, when marauding ex-Seleka elements killed hundreds of civilians. But since then, the 1,600 French and 5,000 African Union peacekeepers have proved unable to fill the security vacuum left in the Seleka’s wake and civilians in areas where fighters had based themselves have come under increasingly vicious attacks from Christian anti-balaka militias seeking revenge.

“The Seleka are the worst thing that could have happened to Muslims in the Central African Republic,” said Joanne Mariner, senior crisis response adviser at Amnesty International, who estimates over 100,000 Muslims have already fled.

“I’ve spoken to hundreds of Muslim civilians and almost every single one tells me that at this point they want to get out of the country,” she told IPS.

On Tuesday, interim president Catherine Samba-Panza told French radio she would request that an official U.N. peacekeeping mission take over from the joint French-African Union mission that the 15-member U.N. Security Council authorised in December, something human rights groups have called for since last year.

But the council again stopped short of sending such a “blue-helmet” mission, authorising only 500 additional European Union troops who will be expected to spell French “Sangari” soldiers guarding 100,000 displaced people camped at Bangui’s airport.

Last week, U.N. High Commissioner for Human Rights Navi Pillay warned “the disarmament of ex-Seleka carried out by French forces appears to have left Muslim communities vulnerable to anti-balaka retaliatory attacks.” Other officials have warned of the potential for genocide in the country and Secretary-General Ban Ki-moon has urged for a peacekeeping mission with up to 9,000 soldiers. But the Security Council demurred. 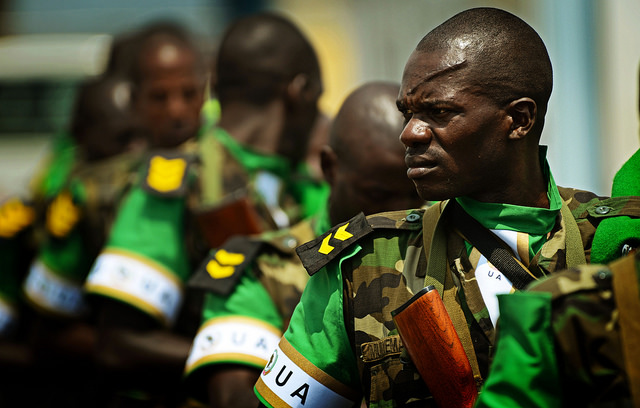 In recent days, anti-balaka have made regular incursions into Bangui’s two remaining Muslim enclaves, known locally as PK5 and PK12, killing dozens of residents and driving out hundreds. PK12 is a main transit point and Muslims from villages surrounding Bangui have congregated there, awaiting passage to Chad and Cameroon.

Last Friday, 22 civilians were murdered in a convoy on the highway to Cameroon, many hacked to death with machetes.

“In PK5, when people leave that area there are lynchings,” Mariner told IPS from the northwest town of Bozoum. “Today, two men were killed in the street – one had his head cut off. They were cut to bits.”

She added, “Bangui used to be an enormously mixed city. That is completely over.”

In PK13, another traditionally Muslim neighbourhood now emptied of its residents, newcomers have already written their names on abandoned houses and made plans to turn the local mosque into a youth centre.

“You come back in a year and you’ll never know that there were Muslims there,” said Mariner. “Unless there’s real action taken, that’s where the country is going.”

Information is sparse outside of Bangui but the situation is believed to be dire north and northwest the capital, where the peacekeeping presence is light and where anti-balaka have actively pushed Muslims out of their towns.

In the western town of Baoro, the only Muslims left have taken refuge in a local church guarded by peacekeepers. But elsewhere, in towns like Bossembele, Yakole and Boyali, most have fled.

Until the Chadian-backed Seleka began fighting, sporadic violence in the country had never broken so deeply along religious lines.

Because the Christian militias are only loosely coordinated at best, negotiations have been impossible in many parts of the country.

“There’s no command and control structure, so even within a single region, they may have five anti-balaka groups vying for power,” said Mariner.

But unlike in the capital, where better organised gangs have access to automatic weapons and grenades, the lightly armed and often young anti-balaka in the countryside travel on foot and are seen fleeing from peacekeepers.

“They mostly have hunting rifles, shotguns, you see a lot with bow and arrows, they are no match to real soldiers. And when there are real soldiers they get out of the way. There are attacks that almost certainly could have been avoided had there been peacekeepers in place.”

The EU contingent will add a third element to an already piecemeal force that has at times appeared overwhelmed.

After the initial Security Council vote in December, observers expressed concern that a streamlined mission – of the kind that had seen moderate successes in Mali against an organised foe – would fail to prevent violence that had devolved into communal, tit-for-tat killings, nor would it address long-term development needs that fostered conflict.

French Ambassador Gerard Araud spoke this week of the need for a full U.N. mission replete with up to 10,000 peacekeepers. But Tuesday’s vote accomplished neither of those goals.

Ainsley Reidy, senior legal advisor at Human Rights Watch, says the international community has a responsibility to bolster the intervention.

“We see protection of the civilian population and accountability for crimes committed by all as the two priority responsibilities of the international community,” said Reidy. “For that reason we continue to remain convinced of the need for the quick deployment of a properly resourced U.N. peacekeeping mission to respond to the scale of the violence.”

Such a mission would augment BINUCA, the small, non-military “peace-building” office already in the country. Groups have for months criticised what they see as a lack of public human rights reporting coming from observers there, a problem they place in the generally disjointed nature of the intervention. Without a unified mandate for all observers and peacekeepers, human rights groups worry accountability and reconciliation will be waylaid.

“We think ultimately there needs to be a fully fledged U.N. mission that addresses both the security needs and can contribute to holding people accountable,” Reidy told IPS.

The December resolution left the door open for the possibility of a larger U.N. peacekeeping mission and would only require an additional vote to initiate a transition. At the time, there was speculation that Security Council members, in particular the United States, were hesitant to budget for another peacekeeping mission at a time when the U.N. has more troops deployed worldwide than ever before. That state of affairs appears unaltered.

In neighbouring South Sudan, where the Security Council voted earlier in December to increase the blue-helmet mission there by 5,000, the transfer of troops has been delayed and thousands have yet to arrive.

“We do know these deployments tend to be slow and can take up to six months,” said Reidy.

“If we take what has happened to civilians between mid-December and mid-January as an indication of how quickly things can happen on the ground in CAR, then six months is too long a time. The U.N. and others can’t afford to drag their feet on this.”