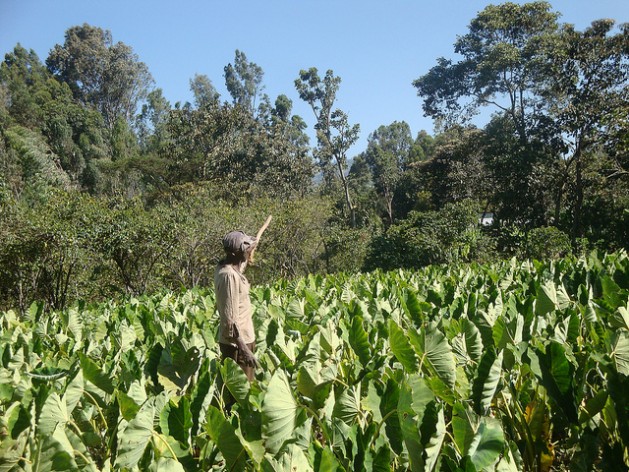 A farmer in Woliyta area of Ethiopia. Concern is growing that not enough is being done to engage Africa’s youth - it’s largest workforce - in food production Credit: Ed McKenna/IPS

TUNIS/ADDIS ABABA, Apr 2 2014 (IPS) - Ketsela Negatu is the son of an Ethiopian goat farmer living close to the country’s capital, Addis Ababa, who refuses to follow in his father’s footsteps. The 19-year-old has negative perceptions about the family profession after seeing the dim prospects a farming livelihood has offered his father.

“I will go to the city and try and find work. I don’t know what I will do but I want to find a job that pays more money so I can live a good life,” he told IPS.

"We will also lose the young who want to be connected and communicate via phones and the Internet if these needs [for reliable power] are not met.” -- Cheikh Ly, secretary of the FAO regional conference

But Ketsela’s thinking is just like that of other young people on the continent as poor financial returns and unglamorous prospects of Africa’s rural economy are spurring young people to leave the fields and migrate to urban centres.

And concern is growing that not enough is being done to engage Africa’s largest workforce – its youth – in food production as they are key to safeguarding food security on the continent, eliminating hunger and accessing global food markets.

“There is not enough stimulus for young people to participate in agriculture in African countries. The young farmers need good prices for good products, otherwise we will lose them to the urban areas. Why should they do the hard work and stay poor,” Gebremedhine Birega, Ethiopian representative of the NGO East and South African Food Security Network told IPS.

Although economic growth in sub-Saharan Africa is expected to reach 6.3 percent in 2014, well above the global average, agricultural leaders at the Food and Agriculture Organisation of the United Nations (FAO) regional conference held in Tunisa from Mar. 24 to 29 agreed that prodigious growth is not translating fast enough into employment for Africa’s youth.

Gerda Verburg, chairperson of the Committee on World Food Security, told IPS that increased commercialisation of agriculture will harness unemployed youth in rural Africa and create a productive and profitable agricultural sector. It will thus bolster food security and create decent income and employment opportunities for young people.

“We have to try and reverse the rural mentality that says farming is a last option. To prevent this loss of labour we need to look at how to improve the financial prospects of those who work in the agricultural sector.

“Private sector finance and agri-industries are helping to modernise agriculture by creating value adding chains that will pay a farmer more for his labour than the local market,” she said.

“There are emerging markets such as aquaculture where we are seeing good potential for growth. More investment in these growing markets will provide greater opportunities for youth employment,” he said.

Greater electrification of rural Africa is also expected to help retain the youth population in the countryside and satisfy an aspiration for a modern lifestyle that features telecommunication and Internet connectivity. Currently, less than 10 percent of sub-Saharan Africa’s rural households have access to electricity.

Cheikh Ly, secretary of the FAO regional conference, told IPS that a major contributing factor behind the decision taken by young people to migrate to urban areas was the lack of electricity in rural Africa.

“Electrification is a key need for Africa’s rural economy. Modern agricultural production is not possible without reliable access to power. We will also lose the young who want to be connected and communicate via phones and the Internet if these needs are not met,” he told IPS.

Greater investment in African agriculture seemed a fait accompli when African leaders met in Maputo, Mozambique in 2003 to commit a minimum of 10 percent of their national budgets to agriculture and to lifting agricultural growth to six percent of GDP per annum by 2008.

Low investment is causing low productivity and thwarting Africa’s agricultural sector, which employs close to 60 percent of Africa’s labour force but accounts for only 25 percent of the continent’s GDP. A deficit of political willpower from African leaders is delaying agricultural expansion on the continent, says Action Aid International’s David Adama.

“Empty words won’t feed empty stomachs. African governments must follow through on their promises and provide more money for agriculture and ensure it is better targeted to help the millions of smallholder farmers who make up most of their citizens and produce most of Africa’s food,” he told IPS.

The potential for the lucrative engagement of Africa’s youth in agriculture should be within grasp. Africa boasts over 50 percent of the world’s fertile and unused land, while foreign investment in African agriculture is expected to exceed 45 billion dollars in 2020, according to World Bank statistics.

However, Africa’s youth are yet to feel the pull of any new “agricultural renaissance” on the continent.

“I would stay and work in the countryside but only if things got better here; unless they do, I will leave for the city and see if there is something better,” Ketsela said.