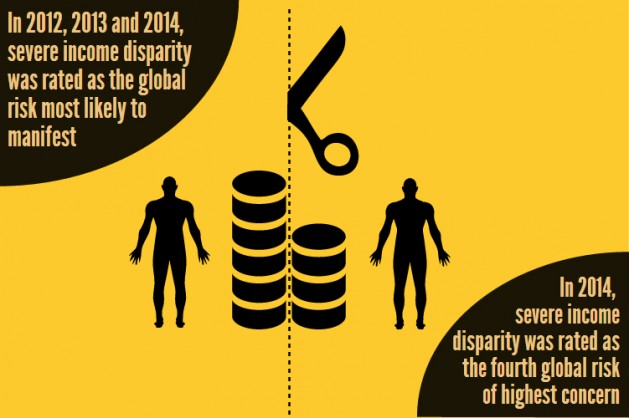 MONTEVIDEO, Jun 4 2014 (IPS) - The very contemporary medieval novels of Welsh author Ken Follett transport readers to a time when the rich had everything – and the poor didn’t even own themselves.

These stories, set in the 12th, 13th and 14th centuries, provide some consolation to today’s readers, who are now surrounded by comforts, freedoms and guarantees.

Poverty was the norm back then. As Follett himself says, “the richest of princes did not live as well as, say, a prisoner in a modern jail.”

Poverty and inequality are not the same thing, but they reinforce each other. In the poverty-stricken Middle Ages, the inequality was terrible. Between the dispossessed common people and the princes, feudal lords and powerful members of the clergy there was a social and economic vacuum that took decades to fill.

Opulence is the overarching parameter of success in 21st century society. But the problem is that all around the world, the rich are getting richer and richer while the armies of poor are pulling out of poverty very slowly, and are never far from the edge.

In India, which is home to 1.2 billion people, the number of billionaires rose tenfold in the last decade. In 2003 they owned 1.8 percent of the national wealth, compared to 26 percent in 2008, according to the international development organisation Oxfam.

Meanwhile, progress in reducing extreme poverty has been too slow: there were 429 million indigents in 1981 and 400 million in 2010, the World Bank reports.

Inequality is increasing across the globe, warn institutions as representative of the neoliberal, free market deregulation mindset as the International Monetary Fund and the World Economic Forum.

The World Economic Forum’s Global Risks report, based on a survey of global elites, stresses income disparity as one of the principal emerging risks.

Are we returning to the Middle Ages?

That would appear to be impossible. The middle classes, or the ranks of the “non-poor”, continue to grow, especially in the large developing countries.

Extreme poverty has been drastically reduced around the world since the 1980s. In 1981, over half of the population of developing countries was extremely poor – a proportion that shrank to 21 percent by 2010, according to the World Bank.

But gaps in income and wealth are growing wider, including in places with well-established middle classes, like Europe or the United States.

Several analysts link the massive numbers of people pulling out of poverty and the growing public perception of inequality with the eruption of social discontent in countries as different as Turkey, Brazil or Chile.

In the 21st century inequality remains a major problem, with new facets in the context of globalised capitalism.

In this scenario, Latin America stands out as an anomaly: while it is still the most unequal region in the world, it is also the only one that has begun to close the gap in the past few years.

Inequality was the focus of a May 22-23 seminar in Santiago, which drew 23 journalists from Chile, Argentina, Bolivia, Brazil and Uruguay. The event was organised by the IPS international news agency with the support of Norway’s foreign ministry.

The seminar, “Other faces of inequality: inequity, corruption and the informal economy in South America”, was aimed at encouraging journalists to report on tough issues like weak tax systems and tax evasion, and the magnitude of informal or precarious labour.

Experts from the United Nations and academia, transparency activists, social researchers and leaders, and student activists offered statistics and viewpoints to inform the discussions and debate in the seminar.

That trove of information included shady aspects that could help explain the social discontent in the most solid and successful economy in Latin America: Chile.

For example, tax evasion stands at 46 percent in the richest segment of the population. And the Cayman Islands and the British Virgin Islands, two well-known tax havens, are among the main countries of origin of foreign direct investment in Chile.

In Latin America, poverty was reduced from 48.4 percent in 1990 to 27.9 percent in 2013. And extreme poverty is at its lowest level ever: 11.5 percent, according to Martín Hopenhayn, director of the Social Development Division of the Economic Commission for Latin America and the Caribbean (ECLAC).

But there are signs that poverty reduction is slowing down. And little progress has been made in modifying the productive structure or the educational system, which are “structural causes of inequality,” he said.

Moreover, the region does a poor job collecting taxes, with direct tax revenue accounting for just 4.4 percent of Latin America’s gross domestic product, against eight percent that comes from indirect taxes, which disproportionately affect the poor.

This is a key aspect, said Hopenhayn, because improved fiscal capacity can correct “the unequalising dynamics of the market.”

But with all of its limitations, Latin America’s experience would appear to be inspiring.

According to Oxfam, “The case of Latin America gives us hope that the global trend of rising inequality can be reversed.”

Latin America is the region where tax revenue has grown the fastest in recent years, and that growth has translated into social spending to curb inequality.

Between 2002 and 2011, income inequality fell in 14 of the 17 countries studied, and some 50 million people climbed into the middle class – which means that for the first time in history, there are more people in the middle classes than in poverty, says the World Bank, although many still have one foot in the abyss.

After winning the inequality championship for so long, Latin America could become a trendsetter when it comes to equality. Other changes will show whether it is just a passing fad.