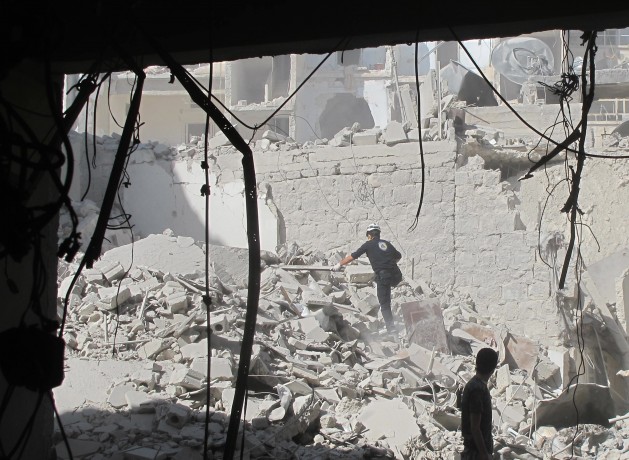 Now car parts, scrap metal, TNT and other explosive materials are packed into oil drums, water tanks or other large cylinders from regime areas and dropped from helicopters onto civilian areas in the same city, in defiance of U.N. Security Council Resolution 2139.

In the days spent inside the city in August, IPS frequently heard bombs throughout the day and night and visited several sites of recent attacks on civilian areas. Locally organised civil defence units could be seen trying to extract survivors from the rubble, but often nothing could be done.

Roughly six months ago, on February 22, the U.N. resolution ordered all parties to the conflict to halt the indiscriminate use of barrel bombs on populated areas. The Syrian regime has instead intensified its use of them.

An Aleppo local council official told IPS that of the some 1.5 million people living in the city previously, there were now fewer than 400,000, with most of those who have left in recent months now internally displaced.

Human Rights Watch released a report in late July saying that it had identified ‘’at least 380 distinct damage site in areas held by non-state armed groups in Aleppo’’ through satellite imaging in the period from October 31, 2013 to the February 22 resolution, and over 650 new impact strikes on rebel-held areas in the period since, marking a significant increase.

An Aleppo local council official told IPS that of the some 1.5 million people living in the city previously, there were now fewer than 400,000, with most of those who have left in recent months now internally displaced. He said that every month the number of people in the area is re-counted for food supply and other requests to donors given the huge displacement under way.

The only road heading towards the Turkish border in rebel hands is now in danger of falling to the fundamentalist Islamic State (IS) – previously known as Islamist State of Iraq and Syria (ISIS) – even if the armed opposition groups manage to keep government troops at bay.

Regime forces are trying to inflict a siege on Aleppo’s rebel-held areas to force them into submission, as they have done to other cities in several parts of the country.

The removal of the jihadist IS group from large sections of territory not under regime control has been entirely due to the fighting by the rebel groups themselves, and it is likely that many will face brutal execution if the group enters the city again – a prospect the regime seems to be favouring.

Barrel bombs are not dropped on IS forces or on the territory held by them, and until recently there were few cases of any sort of attack at all by regime forces against IS-held areas.

A local activist from IS-controlled Jarabulus, now living across the border in Turkey – after coming under suspicion of “speaking negatively of IS” within the community – told IPS that since the jihadist group had taken control of the city, ‘’there has not been a single attack on any part of it’’ by the regime.

The TNT-filled cylinders dropped by Syrian government forces have in recent months instead been destroying the few productive activities that had remained in a city formerly known worldwide for its olive oil soap, textiles and other industries.

Aya Jamili, a local activist now living in Turkey, told IPS that the few Aleppo businessmen who had tried to keep their operations up and running through the years of the conflict had in recent months either moved their equipment across the border or just moved whatever capital they had available and started over again.

Much activity needed for day-to-day survival in the city has moved underground. Underground structures have been renovated by civil defence units into shelters, which also served to hold the festivities marking the end of the Muslim holy month of Ramadan in late July. Any large gathering in the streets would have been likely to attract the attention of the regime.

People who can have moved to basement flats, as have media centres and bakeries, which work at night to avoid being targeted.

Produce is brought in from the countryside and stands sell melons and tomatoes in the streets nearer the regime ones. Because barrel bombs cannot be precisely aimed, there is too large a risk for the regime of dropping them close to its own side, so these locations are deemed ‘safer’.

Nevertheless, there is still the constant risk of snipers and large sheets of bullet-scarred canvas have been hung across some of the streets to minimise their line of vision.

The once bustling, traffic-clogged streets farther away resemble for the most part desolate wastelands.

On the way out of the city, two barrel bombs were dropped in quick succession near the neighbourhood through which IPS was travelling and, just as the driver said ‘’the helicopters only carry two each, so for the moment that’s all’’ and sped onwards, a third, deafening impact occurred nearby, shaking the ground.

Further down the road, signs indicating the way to ‘Sheikh Najjar, industrial city’ are shot through with bullet holes, an apocalyptic scene of crumbling buildings behind them.