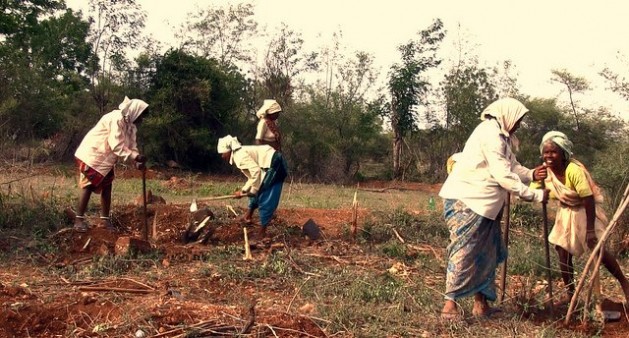 SANGAREDDY, India, Aug 25 2014 (IPS) - Tugging at the root of a thorny shrub known as ‘juliflora’, which now dots the village of Chirmiyala in the Medak District of southern India’s Telangana state, a 28-year-old farmer named Ailamma Arutta tells IPS, “This is a curse that destroyed my land.”

The deciduous shrub, whose scientific name is prosopis juliflora and belongs to the mesquite family, is not native to southern India. The local government introduced it in the 1950s and 1960s to prevent desertification in this region where the average annual rainfall is about 680 mm.

Decades later, the invasive plant has become a menace to farmers in the area, making it impossible to cultivate the land. This is partly due to juliflora’s ability to put out roots deep inside the earth – up to 175 feet in some places – in search of water.

Desperate farmers, who number some 5.5 million in the region, are now uprooting the shrubs as part of a government-sponsored scheme to make the land fertile once more.

In India, of the 417 million acres of land under cultivation, a whopping 296 million acres are degraded. Some 200 million people are dependent on this degraded land for their sustenance. -- Indian Council for Agricultural Research
“The last time we grew anything on the land was about seven years ago, before this [shrub] started spreading all over it,” says Arutta, who is paid about three dollars a day for his work and looks forward eagerly to begin cultivating rice once more.

The operation provides employment while simultaneously laying the groundwork for future food security, and revitalising a degraded area.

Villagers employed by the scheme also perform duties such as removing stones and pebbles from the land, tilling the soil, de-silting ponds and lakes, and collecting fresh mud from waterholes and tanks to apply to the tilled land.

With funds provided through the Mahatma Gandhi Rural Employment Guarantee Act (MGNREGA), a nationwide programme that provides 100-day jobs to poor villagers during the non-farming season, locals are also building check dams on streams and rivulets, and digging percolation tanks to recharge the groundwater table.

Though small in scope, the scheme is highlighting the threat posed by desertification and its impact on the poorest communities in a country where 25 percent of the rural population (roughly 216.5 million people) lives below the poverty line, earning some 27 rupees (0.44 dollars) a day.

In Telangana there are 1.1 million small and marginal farmers who own less than five acres of land. With 54 percent of the state’s land degraded, these farmers fear for their future.

A global problem from an Indian perspective

According to Venkat Ravinder, an assistant director for the MGNREGA programme in Medak district, land degradation is the main environmental problem for farmers in the region.

Recurring drought and erratic rainfall have played havoc on groundwater tables (in some areas water levels have fallen five to 20 metres below ground level), making the surface of the soil unhealthy and dry.

Also, abundant growth of juliflora has increased the level of acidity in the topsoil, making it difficult for farmers to ensure plentiful yields of crops like rice, cotton and chili.

“Due to the high level of land degradation, over 2,000 acres of land have been lying fallow here,” Ravinder, who is overlooking the land restoration process in 125 villages of the district, told IPS.

“Our aim is to make this fallow land cultivable. So, we are clearing it of the harmful vegetation, and through silt application we are increasing the fertility and water-holding capacity of the soil,” he explained.

Globally, 1.2 billion people are directly affected by land degradation, which causes an annual loss of 42 billion dollars, according to the United Nations Convention to Combat Desertification (UNCCD).

In India, of the 417 million acres of land under cultivation, a whopping 296 million acres are degraded, according to the Indian Council for Agricultural Research. Some 200 million people are dependent on this degraded land for their sustenance. 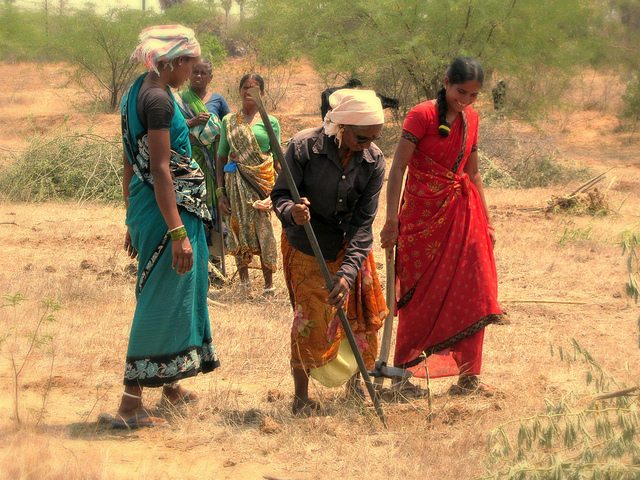 About 296 million acres of Indian farmland are degraded. Some 200 million people are dependent on this land for their sustenance. Credit: Stella Paul/IPS

Having set 2013 as a global deadline to end land degradation, the UNCCD says governments around the world should prioritise land restoration, given that such a massive population depends on unyielding and unhealthy soil.

According to the Indian minister for the environment and forests, Prakash Javadekar, this is an achievable goal. He says his own government is determined to be “land degradation neutral” by 2030.

Speaking on the occasion of the World Day to Combat Desertification (WDCD) earlier this year in New Delhi, the minister said that the problem of degradation, desertification and the creation of wastelands were major challenges impacting livelihoods.

Reiterating the government’s stated goal of scaling up efforts to eradicate poverty, under the leadership of newly elected Prime Minister Narendra Modi, Javadekar stressed that various government agencies should work together on a common implementation strategy regarding desertification, including the departments of water resources, land resources, forests, and climate change and agriculture.

With agriculture accounting for 70 percent of India’s economy, such moves are urgently required, experts say.

Thirty-year-old Arutta Somaya, a farmer from a small village in Telangana state, says his four-acre plot of farmland has become infested with juliflora, and is now virtually uncultivable.

With few options open to him, and a family of four to feed, Somaya left home in 2010 in search of work and for three years travelled to states like Maharasthra in the north, and Odisha in the east, working as a daily migrant labourer.

Today, he is back home and cultivating his land, which was cleared and restored under the land development programme.

Somaya tells IPS that several of his neighbours and friends are also considering returning home as they can earn a livelihood again.

“Before returning home, I was digging bore holes. We had to work for over 15 hours a day. It was very difficult. Now I don’t have to do that again,” adds the farmer, who is planting rice and napier grass, a fast-growing, commercially viable crop that is used as cattle fodder.

Hundreds of other seasonal migrants will be able to return home if the land development programme continues, says Subash Reddy, director of Smaran, a Hyderabad-based non-profit that promotes soil and water conservation.

He also believes the scheme could be more successful if the government roped in community organisations, especially those that work for the welfare of migrants.

“In India, at least 15 million people migrate each year from villages to the cities,” he told IPS. “How many of them are aware of what schemes the government is introducing at home?

“There are several NGOs that work closely with migrant workers,” Reddy added. “These organisations could be instrumental in informing the workers about land restoration [programmes] and also help them return home in time to avail themselves [of the benefits].”

India is poised to set an example to a global problem – it just needs to find the political will to do so.