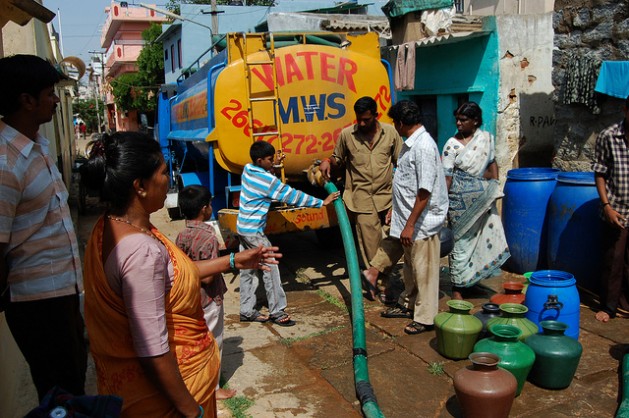 Sanitation infrastructure in India’s sprawling slums belies the official story that the country is well on its way to providing universal access to safe, clean drinking water. Credit: Malini Shankar/IPS

UNITED NATIONS, Sep 23 2014 (IPS) - People living in cities already outnumber those in rural areas and the trend does not appear to be reversing, according to UN-Habitat, the Nairobi-based agency for human settlements, which has warned that planning is crucial to achieve sustainable urban growth.

“In the hierarchy of the ideas, first comes the urban design and then all other things,” Joan Clos, executive director of UN-Habitat, told IPS while he was in New York for a preparatory meeting of Habitat III, the world conference on sustainable urban development that will take place in 2016.

"In the past urbanisation was a slow-cooking dish rather than a fast food thing." -- Joan Clos, executive director of UN-Habitat

“Urbanisation, plotting, building – in this order,” he said, explaining that in many cities the order is reversed and it is difficult to solve the problems afterwards.

According to the U.N. Department for Economic and Social Affairs (DESA), urban population grew from 746 million in 1950 to 3.9 billion in 2014 and is expected to surpass six billion by 2045. Today there are 28 mega-cities worldwide and by 2030 at least 10 million people will live in 41 mega-cities.

Although the proportion of the urban population living in slums has decreased over the years, and one of the Millennium Development Goals achieved its aim of improving the lives of at least 100 million slum-dwellers, the absolute number has continued to grow, due in part to the fast pace of urbanisation.

The same report estimates that the number of urban residents living in slum conditions was 863 million in 2012, compared to 760 million in 2000.

“In the past urbanisation was a slow-cooking dish rather than a fast food thing,” Clos said.

“We have seen it in multiple cases that spontaneous urbanisation doesn’t take care for the public space and its relationship with the buildable plots, which is the essence of the art of building cities,” he added.

The former mayor of Barcelona for two mandates, Clos thinks that a vision is needed to build cities. And when he says building cities, he does not mean building buildings, but building healthy, sustainable communities.

Relinda Sosa is the president of National Confederation of Women Organised for Life and Integrated Development in Peru, an association with 120,000 grassroots members who work on issues directly affecting their own communities to make them more inclusive, safe and resilient. They run a number of public kitchens to ensure food security, map the city to identify issues that may create problems, and work on disaster prevention.

“Due to the configuration of the society, women are the ones who spend most time with the families and in the community, therefore they know it better than men who often only sleep in the area and then go to work far away,” Sosa told IPS.

“Despite their position, though, and due to the macho culture that exists in Latin America, women are often invisible,” she added. “This is why we are working to ensure they are involved in the planning process, because of the data and knowledge they have.”

The link between the public and elected leaders is crucial, and Sosa’s organisation tries to bring them together through the participation of grassroots women.

Carmen Griffiths, a leader of GROOTS Jamaica, an organisation that is part of the same network as Sosa’s, told IPS, “When access to basic services is lacking, women are the ones who have to face these situations first.

“We look at settlements patterns in the cities, we talk about densification in the city, people living in the periphery, in informal settlements, in housing that is not regular, have no water, no sanitation in some cases, without proper electricity. We talk about what causes violence to women in the city,” Griffiths added.

As the chief of UN-Habitat told IPS, it is crucial to protect public space, possibly at a ratio of 50 percent to the buildable plots, as well as public ownership of building plans. The local government has to ensure that services exist in the public space, something that does not happen in a slum situation, where there is no regulation or investment by the public.

Griffiths meets every month with the women in her organisation: they share their issues and needs and ensure they are raised with local authorities.

“Sometimes it happens that you find good politicians, some other times they just want a vote and don’t interface with the people at all,” she added.

Griffiths also sits on the advisory board of UN-Habitat, to voice the needs of her people at the global level and then bring the knowledge back to the communities, she explained.

These battles are bringing some results, especially in the urban environment. Sosa said that women are slowly achieving wider participation, while in rural areas the mindset is still very conservative.

About the relationship between urban and rural areas, Maruxa Cardama, executive project coordinator at Communitas, Coalition for Sustainable Cities & Regions, told IPS that an inclusive plan is needed.

Cities are dependent on the natural resources that rural areas provide, including agriculture, so urban planning should not stop where high rise buildings end, she explained, adding that this would also ensure rural areas are provided with the necessary services and are not isolated.

Although they will not be finalised until 2015, the Sustainable Development Goals (SDGs) currently include a standalone goal dedicated to making “cities and human settlements inclusive, safe, resilient and sustainable.”