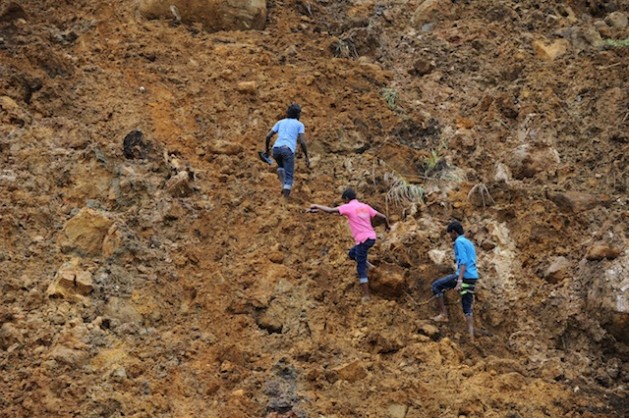 Villagers climb through the rubble looking for survivors soon after the Oct. 29 landslide in south-central Sri Lanka Credit: Contributor/IPS

COLOMBO, Nov 2 2014 (IPS) - When early warning systems fail, death comes quickly to unsuspecting victims of natural disasters. It is a reality that millions of Sri Lankans have experienced repeatedly in the last decade, and yet those responsible for preventing human fatalities continue to make the same mistakes.

The latest such tragedy – a result of ignorance and indifference to imminent danger – struck on the morning of Oct. 29, on the Meeriyabedda tea estate in Koslanda, a hilly region about 220 km east of the capital, Colombo.

After persistent rains, a two-km stretch of hillside caved in early morning, burying an estimated 66 small houses belonging to estate workers under some 30 feet of mud.

An initial situation report by the World Health Organisation (WHO) suggested there had been roughly 300 occupants in these homes; some had been away at work, and most of the children were in school when the disaster occurred.

Four days later four bodies had been recovered and 34 were listed as missing, a figure that was revised from an initial estimate of 100. Over 1,800 have been displaced and most of them may never return to their homes again.

“The real tragedy is there was ample time to move out, warnings telling [villagers] to do so and places that they could move into." -- Indu Abeyratne, manager of the early warning systems of Sri Lanka Red Cross Society (SLRCS)
But the land did not come barreling down the mountainside without a warning. In fact there had been warnings that these houses were a death trap almost a decade ago.

In 2005, the National Building Research Organisation (NBRO) carried out a survey of the area and made its first warning call.

“We found that the land on which the houses were standing was not stable and prone to landslides and our recommendation was relocation,” N K R Seneviratne, NBRO’s geologist for the south-central Badulla District, who headed the survey, told IPS.

In fact some officials at the landslide site said that the 66 houses that had been completely buried by the earth were clearly identified as those most in danger.

Six years later a similar survey was carried out and the recommendations were the same. Small landslides prompted the surveys. In both instances, Seneviratne said, recommendations were conveyed to villagers as well as public officials, who failed to take action on relocation.

Just before this most recent landslide, which occurred around 7.10 in the morning, Seneviratne said that his office had sent a warning to the Haldummulla Divisional Secretariat, the local public authority. Though some villagers were also made aware of the risks, most decided to stay put.

“There were warnings, but all that systematic dissemination process ended once it reached the Divisional Secretariat level; after that, at best, it was ad hoc, at worst nothing seems to have happened,” Indu Abeyratne, manager of the early warning systems of the Sri Lanka Red Cross Society (SLRCS), which is now coordinating relief efforts at the site, told IPS.

The villagers themselves missed the signs. In 2009, the Disaster Management Center (DMC), the main government agency overseeing early warnings and disaster assistance, together with the NBRO and the Red Cross, conducted a major community awareness programme in the Koslanda area.

Local villagers were advised to form community groups to act as watchdogs, scanning for imminent signs of danger and preparing evacuations plans. Megaphones were distributed, which villagers could use to gather crowds in an emergency, while the Meeriyabedda tea estate was also given a simple rain gauge to keep track of the levels of precipitation.

The NBRO has its own rain monitor at a school nearby and it was reading that at least 125 mm of rain had fallen overnight by the morning of Oct. 29. If anyone on the estate has been monitoring the village rain gauge, it should have been clear that the soil below was getting too soggy for anyone’s comfort.

But no one was watching the red flags, and when the earth collapsed in on itself with a loud boom, many were caught unawares.

“The real tragedy is there was ample time to move out, warnings telling them to do so and places that they could move into,” SLRCS’s Abeyratne said.

Why did so many stay put in such eminent danger? That is the gnawing question that many assisting the relief effort are now trying to answer.

Gaps in the early warning mechanism have been identified since the disaster.

The main culprit seems to be the lack of an apex authority in control of local warnings, dissemination, evacuations and the absence of a rehearsed evacuation plan, despite the very real danger of landslides in the area.

Shanthi Jayasekera, the head of the Haldumulla Divisional Secretariat, told reporters that even though warnings had been issued there were no clear instructions on evacuations.

In other parts of Sri Lanka, especially along the coast devastated by the 2004 Asia tsunami, there are rehearsed and tested evacuation and early warning plans.

There are DMC units stationed at each of the country’s 25 districts, spread across its nine provinces, tasked with local coordination of such efforts, while the police and armed forces are used to disseminate warnings and handle mass evacuations.

The last such evacuation took place two-and-a-half years back in April 2012 when over a million left their homes along the coast after a tsunami warning.

Evacuation drills and rehearsals are carried out by the DMC every three months, but none seemed to have covered the Meeriyabedda area.

Less than ten days before the landslide, on Oct. 23, the DMC carried out landslide evacuations drills in six districts including Badulla, but unfortunately Meeriyabedda was not among those chosen.

“There was no such plan here, no one knew where to move out to and how to do it; [most] importantly there was no one, no authority, that was taking the lead,” Sarath Lal Kumara, DMC’s spokesperson, told IPS.

“What we should have had is a government agency-led early warning dissemination plan and an evacuation map,” he said.

Such systems do exist elsewhere in the country. According to Abeyratne, SLRCS’s trained volunteer groups work alongside the DMC and local public bodies, as well as the police and armed forces, during emergencies.

“It is a complex system, but it is a system that has been tested [in] real time here [in Sri Lanka] and has worked,” he said. In fact, SLRCS volunteers were among the first to reach the landslide-affected area this past Wednesday.

Perhaps one of the biggest gaps in the disaster management plan for the area was the failure to take into account the socio-economic conditions of those living in landslide-prone areas.

DMC’s Kumara told IPS said that most of the residents and victims were poor workers earning meager wages at nearby tea plantations.

Seneviratne added that the plantation workers are of Indian origin, descendents of those brought by British colonialists to work on the estates about 200 years ago.

The homes that were destroyed were not really houses, but one-room blocks, a dozen to a row, popularly known as ‘line houses’.

The majority of estate residents have lived this way for generations, earning a living by picking tea, tapping rubber or stripping cinnamon. They are entirely dependent on the plantations to which they belong.

A regional plantation company, Maskeliya Plantations Limited, owns the land where the deadly landslide took place. Three days after the landslide the military had to intervene to prevent villagers from assaulting officials of the company at the landslide site.

Sri Lanka’s disaster preparedness levels have improved from a barebones structure a decade ago, when the tsunami left 35,000 dead or missing. Since then it has been a steep learning curve on how to face up to the challenges of frequent extreme weather events.

“It is a situation that needs careful evaluation, not stopgap solutions,” Seneviratne said.

“Each disaster is a lesson on what can be done better, how to save lives,” SLRCS’s Abeyratne added.

If anyone needs a stark reminder on how important these lessons can be, just look up the mountainside at Meeriyabedda – or what is left of it.