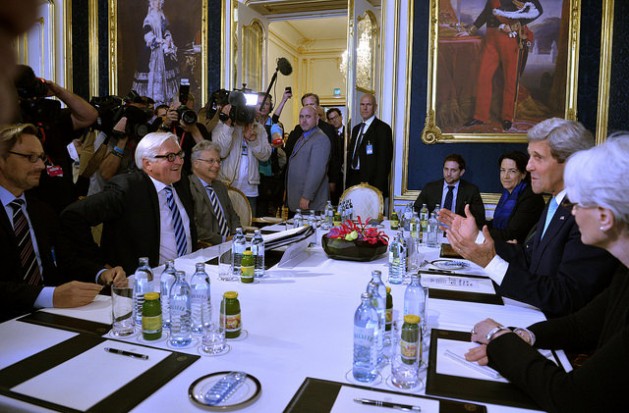 WASHINGTON, Nov 25 2014 (IPS) - Buoyed by the failure of the U.S. and five other powers to reach a comprehensive agreement with Iran over its nuclear programme after a week of intensive talks, pro-Israel and Republican hawks are calling for Washington to ramp up economic pressure on Tehran even while talks continue, and to give Congress a veto on any final accord.

“We have supported the economic sanctions, passed by Congress and signed into law by the president, in addition to sanctions placed on Iran by the international community,” Sens. John McCain, Lindsey Graham, and Kelly Ayotte, three of the Republican’s leading hawks, said in a statement released shortly after the announcement in Vienna that the one-year-old interim accord between the so-called P5+1 and Iran will be extended until Jul. 1 while negotiations continue.

Most Iran specialists here believe that any new sanctions legislation will likely sabotage the talks, fracture the P5+1, and thus undermine the international sanctions regime against Iran.

“These sanctions have had a negative impact on the Iranian economy and are one of the chief reasons the Iranians are now at the negotiating table,” the three senators went on.

“However, we believe this latest extension of talks should be coupled with increased sanctions and a requirement that any final deal between Iran and the United States be sent to Congress for approval. Every Member of Congress should have the opportunity to review the final deal and vote on this major foreign policy decision.”

Their statement was echoed in part by at least one of the likely Republican candidates for president in 2016.

“From the outcome of this latest round, it also appears that Iran’s leadership remains unwilling to give up their nuclear ambitions,” said Florida Sen. Marco Rubio, a favourite of pro-Israel neo-conservatives.

“None of this will change in the coming months unless we return to the pressure track that originally brought Iran to the table.”

At the same time, however, senior Democrats expressed disappointment that a more comprehensive agreement had not been reached but defended the decision to extend the Nov. 24, 2013 Joint Programme of Action (JPOA) between the P5+1 — the U.S., Britain, France, Russia, China plus Germany – and Iran – an additional seven months, until Jul. 1.

Echoing remarks made earlier by Secretary of State John Kerry, who has held eight meetings with his Iranian counterpart, Javad Zarif, over the past week, Senate Intelligence Committee Chair Dianne Feinstein noted that “Iran has lived up to its obligations under the interim agreement and its nuclear programme has not only been frozen, it has been reversed. Today, Iran is further away from acquiring a nuclear weapon than before negotiations began.

“I urge my colleagues in Washington to be patient, carefully evaluate the progress achieved thus far and provide U.S. negotiators the time and space they need to succeed. A collapse of the talks is counter to U.S. interests and would further destabilise an already-volatile region,” she said in a statement.

The back and forth in Washington came in the wake of Kerry’s statement at the conclusion of intensive talks in Vienna. Hopes for a permanent accord that would limit Iran’s nuclear activities for a period of some years in exchange for the lifting of U.S. and international sanctions against Tehran rose substantially in the course of the week only to fall sharply Sunday when Western negotiators, in particular, spoke for the first time of extending the JPOA instead of concluding a larger agreement.

Neither Kerry nor the parties, who have been exceptionally tight-lipped about the specifics of the negotiations, disclosed what had occurred to change the optimistic tenor of the talks.

Kerry insisted Monday that this latest round had made “real and substantial progress” but that “significant points of disagreement” remain unresolved.

Most analysts believe the gaps involved include the size and scope of Iran’s uranium enrichment programme – specifically, the number of centrifuges it will be permitted to operate — and the number of years the programme will be subject to extraordinary curbs and international inspections.

Kerry appealed to Congress to not to act in a way that could sabotage the extension of the JPOA – under which Iran agreed to partially roll back its nuclear programme in exchange for an easing of some sanctions – or prospects for a successful negotiation.

“I hope they will come to see the wisdom of leaving us the equilibrium for a few months to be able to proceed without sending messages that might be misinterpreted and cause miscalculation,” he said. “We would be fools to walk away.”

The aim, he said, was to reach a broad framework accord by March and then work out the details by the Jul. 1 deadline. The JPOA was agreed last Nov. 24 but the specific details of its implementation were not worked out until the latter half of January.

Whether his appeal for patience will work in the coming months remains to be seen. Republicans, who, with a few exceptions, favoured new sanctions against Iran even after the JPOA was signed, gained nine seats in the Senate and will control both houses in the new Congress when it convenes in January.

If Congress approves new sanctions legislation, as favoured by McCain, Rubio, and other hawks, President Barack Obama could veto it. To sustain the veto, however, he have to keep at least two thirds of the 40-some Democrats in the upper chamber in line.

That could pose a problem given the continuing influence of the Israel lobby within the Democratic Party.

Indeed, the outgoing Senate Foreign Relations Committee chair, Robert Menendez, who reluctantly tabled a sanctions effort earlier this year, asserted Monday that the administration’s efforts “had not succeeded” and suggested that he would support a “two-track approach of diplomacy and pressure” in the coming period.

The American Israel Public Affairs Committee (AIPAC), the leading Israel lobby group, also called Monday for “new bipartisan sanctions legislation to let Tehran know that it will face much more severe pressure if it does not clearly abandon its nuclear weapons program.”

Its message echoed that of Israeli Prime Minister Binyamin Netanyahu, who had reportedly personally lobbied each of the P5+1’s leaders over the weekend, and who, even before the extension was officially announced, expressed relief at the failure to reach a comprehensive accord against which he has been campaigning non-stop over the past year.

“The agreement that Iran was aiming for was very bad indeed,” he told BBC, adding that “the fact that there’s no deal now gives [world powers] the opportunity to continue …to toughen [economic pressures] against Iran.”

The Iran task force of the Jewish Institute for National Security Affairs (JINSA), co-chaired by Dennis Ross, who held the Iran portfolio at the White House during part of Obama’s first term, said, in addition to increasing economic pressure, Washington should provide weaponry to Israel that would make its threats to attack Iran more credible.

“There’s no point waiting seven months for either another failure or a truly terrible deal,” ECI, which helped fund several Republican Senate campaigns this fall, said.

“Congress should act now to reimpose sanctions and re-establish U.S. red lines that will prevent Iran from acquiring a nuclear weapons capability. To that end, such legislation must limit the president’s authority to waive sanctions, an authority the president has already signaled a willingness to abuse in his desperate quest for a deal with the mullahs.”

Most Iran specialists here believe that any new sanctions legislation will likely sabotage the talks, fracture the P5+1, and thus undermine the international sanctions regime against Iran, strengthen hard-liners in Tehran who oppose accommodation and favour accelerating the nuclear programme.

“The worst scenario for U.S. interests is one in which Congress overwhelmingly passes new sanctions, Iran resumes its nuclear activities, and international unity unravels,” wrote Karim Sadjadpour, an Iran specialist at the Carnegie Endowment for International Peace, on the Wall Street Journal website Monday.

“Such an outcome would force the United States to revisit the possibility of another military conflict in the Middle East.”

Such arguments, which the administration is also expected to deploy, could not only keep most Democratic senators in line, but may also persuade some Republicans worried about any new military commitment in the Middle East.

Sen. Bob Corker, who will likely chair the Foreign Relations Committee in the new Congress, issued a cautious statement Monday, suggesting that he was willing to give the administration more time. Tougher sanctions, he said, could be prepared “should negotiations fail.”