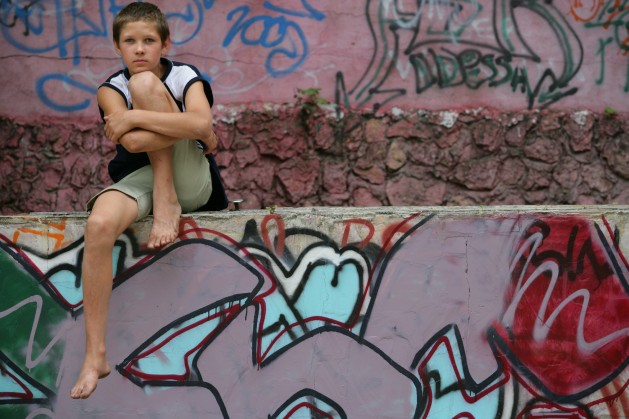 Young boy sitting on a wall outside 'Way Home', a UNICEF-assisted shelter providing food, accommodation, literacy trainings and HIV/AIDS-awareness lessons to street children in Odessa, Ukraine. Because of unsafe sex and injecting drug use, street adolescents are one of the groups most at risk of contracting HIV. Credit: UNICEF/G. Pirozzi

KIEV, Dec 9 2014 (IPS) - Marginalised communities and civil society groups helping them are warning of a “tragedy” in Eastern Europe and Central Asia (EECA) as international funding for HIV/AIDS and tuberculosis (TB) programmes in the regions is cut back.

The EECA is home to the world’s only growing HIV/AIDS epidemic and is the single most-affected region by the spread of multi-drug resistant TB (MDR-TB). For years, HIV/AIDS and TB programmes in many of its countries have been heavily, or exclusively, reliant on funding from theGlobal Fund to Fight AIDS, TB and Malaria.

But this year has seen the Global Fund move to a new financing model based on national income statistics, under which funding in many EECA countries has already been – or will soon be – heavily cut.

“This [reduction in Global Fund financing] could lead to tragedy because governments are not yet ready to take on the responsibility for addressing the HIV/AIDS epidemic. I would like decision-makers to understand that this is not just [about] epidemiological statistics but that our lives and health are at stake” – Viktoria Lintsova of the Eurasian Network of People Who Use Drugs (ENPUD)

Some of those likely to be most heavily affected by the cuts say that the reduction in Global Fund financing is putting essential HIV/AIDS and TB services, and with it lives, at risk.

Viktoria Lintsova of the Eurasian Network of People Who Use Drugs (ENPUD) told IPS: “This could lead to tragedy because governments are not yet ready to take on the responsibility for addressing the HIV/AIDS epidemic. I would like decision-makers to understand that this is not just [about] epidemiological statistics but that our lives and health are at stake.”

At the heart of their concerns are worries over funding for not just medical treatment for existing patients but prevention and other services for at risk and marginalised communities.

Injection drug use has been identified as the main driver of the HIV/AIDS epidemic in the EECA but HIV/AIDS is also being increasingly spread among men who have sex with men and sex workers – groups which are heavily marginalised because of political and societal attitudes to homosexuality and women.

TB, an equally severe health problem in the EECA, is closely linked to the HIV/AIDS epidemic because co-infection rates are often high.

Throughout the region, prevention and harm reduction services for marginalised groups are provided by civil society groups which rely almost exclusively on international funding.

She said: “It is affecting services provided by NGOs covering at-risk groups. These ‘low threshold entry’ services, while not necessarily medical interventions, are crucial to keep people from risk groups coming to centres where they get referred to medical institutions to get treatment and can access medical services as well.

Critics point to rising HIV/AIDS infections in Romania in recent years as a sign of what could happen in other EECA countries when the Global Fund cuts back its financing.

The Global Fund ended financing for programmes in the country in 2010. According to data from the Romanian government, since then there has been a dramatic rise in HIV infections among people who use drugs: in 2013, about 30 percent of new HIV cases were linked to injection drug use compared with just three percent in 2010.

Under the Global Fund’s New Financing Model (NFM), the major change is a reduction in financing to middle income countries. Many EECA countries are now classified as middle income and critics say that while the organisation’s goal of looking to prioritise use of finite resources is sensible, national income data does not always accurately reflect the ability of people to access health care services, nor whether a country has the funds for an adequate disease response.

Many point to the situation in Ukraine as an example highlighting the problems of the NFM.

According to a report from the Open Society Foundations, Global Fund spending on HIV will drop by more than 50 percent for Ukraine between 2014 and 2015. This includes reductions in unit cost spending for people who use drugs by 37 percent, for sex workers by 24 percent and for men who have sex with men by 50 percent.

Meanwhile, the national HIV prevention budget was slashed by 71 percent in 2014 amid political and economic upheaval.

Lintsova, who lives in central Ukraine, told IPS of the problems drug users are currently facing.

She said that not only are there shortages of the right drugs to treat TB in some parts of the country, but that very few drug users have access to them. Places on opiate substitution treatment (OST) programmes are very limited and waiting times to join them long, sometimes fatally so.

“I know two people who died waiting to get on an OST programme,” she told IPS. “And there are other problems like a lack of needle exchange centres in rural areas, in fact a lack of any harm reduction services in small towns, which leads to high rates of HIV in those places.”

She added that without proper funding, the situation would not improve. “The only solution to these problems is financing,” she said.

But other stakeholders have also privately raised fears that a greater government role in fields such as drug procurement could see authorities looking to save money and procuring larger quantities of cheaper TB drugs of worse quality. Meanwhile, local legislation also makes procurement tenders long and difficult, leading, some health care experts predict, to governments running out of stocks of some essential medicines.

It is unclear how governments will deal with the reduction of Global Fund financing. The transition from Global Fund to domestic funding, although widely announced and anticipated, is not going smoothly in all countries.

Many are often unclear when the Global Fund will actually leave because no straightforward timing plan has been set. There are also specific problems in individual states. In Ukraine, in particular, domestic TB funding has been severely affected by the military conflict, struggling economy and currency fluctuation.

Late last month, these growing fears prompted 24 prominent NGOs in the region to send an open letter to the Global Fund warning of their ‘grave concerns’ over the allocation of funding in the region and calling for it to work with local groups and affected communities.

They specifically asked it to look at each country individually, rather than adopt a “one size fits all” approach.

The Global Fund declined to respond when contacted by IPS.

However, drug users who spoke to IPS said there was little hope of an improvement in the region’s HIV/AIDS and TB epidemics if the Global Fund fails to heed NGOs’ warnings.

Lintsova told IPS: “A lack of reaction to our calls could lead to problems accessing prevention and treatment programmes and a deepening of the EECA’s HIV/AIDS and TB epidemics.”