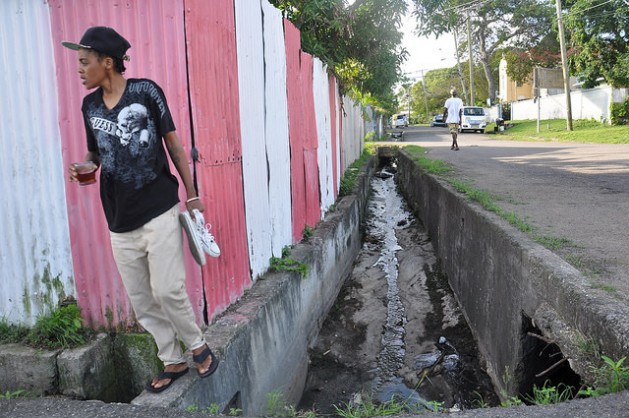 Terry-Ann Lewis fears that this drain which runs through her community could lead to catastrophe if it is unable to handle heavy storm runoff. Credit: Desmond Brown/IPS

GREEN BAY, Antigua, Jan 28 2015 (IPS) - It was early on a Saturday morning and there was no sign of life in the community. The shacks erected on both sides of the old, narrow road that winds through the area are all surrounded by zinc sheets which rise so high, it’s impossible to see what lies on the other side.

But behind those walls is a story of life on the margins: poverty and fear for women. In spite of noticeable improvements in the overall quality of life in Antigua and Barbuda, inequality and deprivation continue to challenge development, with pockets of extreme poverty in some areas.

For Cynthia James and other women living in this shoreline community on the outskirts of the capital St. John’s, hope is all but lost.

“A politician came here once and called me a dog,” James said as she stood outside her gate holding her one-year-old grandson. “The politician said all of us in here are dogs and are not used to anything good and we will always be dogs. I will never forget that. When you get hurt you never forget it.”

The two main political parties here hold differing views about the level of poverty and unemployment in the country. The Antigua Labour Party (ALP) has consistently placed the poverty level at around 35 per cent but the United Progressive Party (UPP) placed the percentage of the working population living on less than EC$10 a day at 12 per cent, the lowest in the region.

James, 53, does not care much for the numbers being debated by politicians. For year now, she and the other women living in this vulnerable area have been watching a drain which runs through the community wreak havoc on their modest dwellings whenever it rains.

James, her 78-year-old mother Gertrude and 28-year-old daughter Terry-Ann Lewis all live on the same street. Their biggest fear now is that the drain which runs through the area will one day cause their deaths. 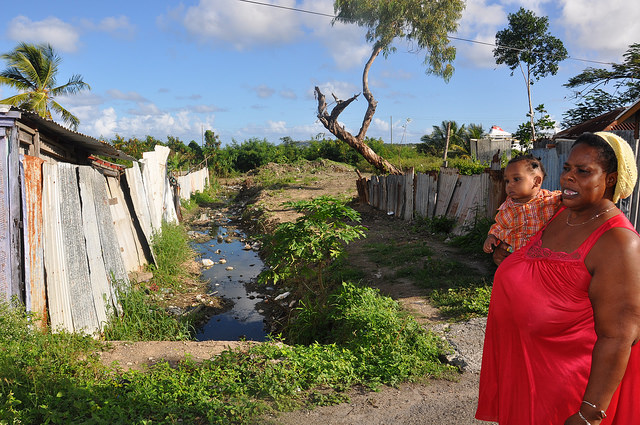 “When I was a little girl they would always come and clean out the gutter, they would send the prisoners to clean up the area, but all of that has stopped,” James told IPS. “Whenever the rain comes, it floods my mother’s house, it floods my house and it floods my daughter’s house.”

The dozens of families here have thought about moving to safer communities but they say they are just too poor to relocate without assistance.

In 2014, the issue of poor drainage that leads to flooding in this and other communities across the country came into focus with a series of community consultations led by the Environment Division.

Senior Environment Officer Ruleta Camacho said the aim was to establish a sustainable financing mechanism and develop a climate adaptation project that could bring about significant changes to affected communities.

“Due to the impact of climate change we are having exacerbated drought and exacerbated rainfall – we are having large amounts of rain in a short amount of time and what we need to do at this point is to make sure our waterways and drains can handle that volume of water,” she said.

Terryann Lewis is anxiously awaiting the commencement of the promised project. She recalled her brush with death on Oct. 13, 2014 when Tropical Storm Gonzalo passed near Antigua, tearing roofs from people’s homes and knocking down trees.

For several hours, heavy rain and strong winds lashed Antigua, which bore the brunt of the storm as it cut through the northern Leeward Islands. Downed trees blocked many island roads and people lost power or reported that the storm damaged, or in some cases destroyed the roofs of their homes.

“The gutter that runs through this community collects waste from all over the place so everything ends up right here in this community.

“That gutter is going to kill all of us; that is the only thing I can tell you. The gutter is blocked so whenever we have rain the water is not free to run. The drain is clogged up so the water quickly overflows. Whenever it rains this whole area is like a beach,” she added.

Prime Minister Gaston Browne, whose administration came to power just seven months ago, said his government will focus on improving human development, putting people first. He has consistently said he intends to make Antigua the region’s economic powerhouse, a Singapore on the Caribbean Sea.

“We will focus on building our human capital into internationally competitive individuals capable of driving the growth and social development of our nation state,” Browne said.

“We will concentrate on youth empowerment, providing our youth with employment, the opportunity to own a piece of the rock under our land for youth programme, a home under our home for youth programme or his/her own business through a dedicated entrepreneurial loan programme, that will commence in 2015 at the Antigua & Barbuda Development Bank.

“Our main focus of human development will be through education and training. No one will be left behind,” Browne added.

The International Monetary Fund anticipates growth in Latin America and the Caribbean in the region of 2.2 percent for 2015. This represents something of a rebound for the region, as growth in 2014 was estimated to be 1.3 percent.

But whether that figure will translate into improved living conditions for the poorest and most vulnerable remains to be seen.