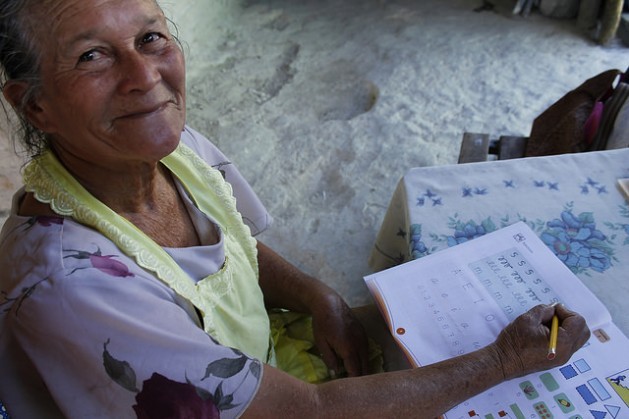 Maximina Velasco reviews a reading and writing lesson in her home, as part of the literacy programme that made the town of Tapalhuaca, El Salvador, an illiteracy-free zone. Credit: Edgardo Ayala /IPS

TAPALHUACA, El Salvador, Jan 8 2015 (IPS) - At the age of 74, Carmen López has proven that it’s never too late to learn. She is one of the 412 people in this small town in central El Salvador who recently learned to read and write.

“I was sad that I couldn’t write a letter or a receipt. But now I’m happy because I can,” she told IPS at the ceremony where Education Ministry authorities declared Tapalhuaca, population 4,000, an illiteracy-free zone.

A place is declared free of illiteracy when 96 percent of the inhabitants have learned to read and write. In the case of this small town in the department or province of La Paz, the proportion is even higher: 97.7 percent.

Like López, Maximina Velasco, 61, feels she broke through the barrier of ignorance when she signed up for the literacy course.

“It’s a historic debt; for a long time, a majority of the population has been marginalised from education.” -- Maydé Recinos

“When I was a little girl, I started school. But I didn’t finish first grade because the teacher would hit me, and made me feel terrible,” she said, while writing out vowels and consonants during one of the classes she takes in her home, as part of a system that provides both group and one-on-one teaching.

She was forced to cut the class short because she had to cook lunch for her family – a problem shared by many of the women taking part in the literacy programme.

The literacy worker, 16-year-old Yanci Cubías, is one of the 130 volunteers teaching in this farming town. She spends two hours a day, a total of 10 a week, helping adults learn to read and write.

“At first it was hard to gain the trust of the people I was teaching, but in time everything went well, and it has become an unforgettable experience,” Cubías said.

Illiteracy became a serious problem in this impoverished Central American country of 6.2 million due to decades of social injustice that deprived a majority of the population of an education, especially in the countryside, where they worked as hired labour on coffee and cotton plantations belonging to the rural elite.

“It’s a historic debt; for a long time, a majority of the population has been marginalised from education,” activist Maydé Recinos, with the Salvadoran Foundation for Social Promotion and Economic Development (Funsalprodese), told IPS.

Her organisation forms part of the Salvadoran chapter of the Latin American and Caribbean Council for Popular Education (CEAAL).

Both López and Velasco, who have dedicated themselves to raising their children and helping their husbands in rural activities, have managed to overcome a hurdle still faced by many women in the country: for decades illiteracy has affected women more than men, because of a sexist culture.

The Salvadoran government’s National Literacy Programme has taught 200,000 people to read and write since 2009. That has brought the illiteracy rate among people over the age of 10 down from 17.9 percent in 2009 to 11.8 percent in 2013, according to the 2013 multi-purpose household survey.

But in rural areas, the illiteracy rate stands at 18.9 percent, with women accounting for 11 percentage points and men 7.9.

The gender disparity “is due to the ‘machista’ culture. Dads used to say: boys should go to school and girls should do the housework,” the head of the Education Ministry’s literacy department, Angélica Paniagua, told IPS.

López remembers how, when she was a girl, her parents enrolled her in school, but she often missed class because they forced her to do housework.

“I liked school, but they left me at home alone to do the housework,” she said, “so I missed a lot of classes, and they finally pulled me out.”

Things will improve for women as the government puts a higher priority on education, especially in terms of expanding access to primary school and ensuring that children complete it, said Mirna Lemus with the Intersectoral Association for Economic Development and Social Progress (Cidep).

In its third and last report on compliance with the Millennium Development Goals (MDGs), a set of global anti-poverty and development targets to be met by 2015, the government reported in early 2014 that primary school coverage increased from 86 percent in 2000 to 93.1 percent in 2012.

But the school dropout rate, especially in rural areas, remains higher among girls than among boys, according to the 2013 household survey.

The reduction of illiteracy is considered significant, but still insufficient to reach the MDG education targets.

“We still have a ways to go to reach the goals, but with the efforts we are making, we think the country is going to make more progress in the next five years,” said Paniagua.

The education authorities project that El Salvador will be declared free of illiteracy in 2019, the last year of the government of Salvador Sánchez Cerén, a former left-wing guerrilla commander and former teacher who became president in June.

Civil society organisations agree that reducing illiteracy by seven percentage points is an important achievement. But they say a bigger effort is needed, especially in terms of funding.

The spokespersons for Cidep and Funsalprodese said seven percent of GDP should be spent on education, but the proportion remains stuck at 3.3 percent as a result of the government’s tough financial straits.

Meanwhile, Maximina Velasco told IPS, with her face lit up by a big smile, that she is sure she will keep alive her interest in reading and writing, and that she will never return to the illiteracy that kept her so blind for most of her life.