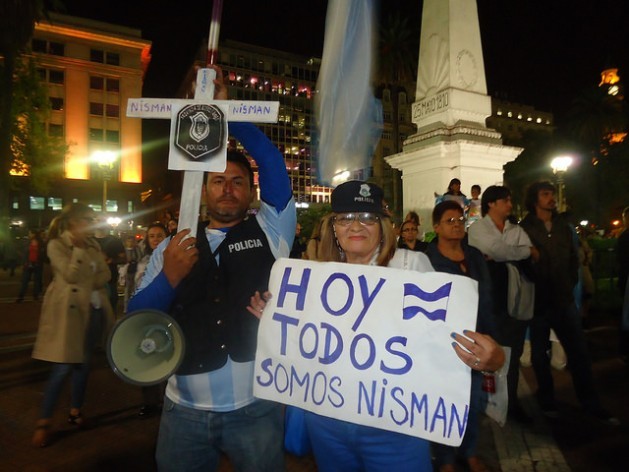 “Today we are all Nisman” - demonstrators demand justice for the death of prosecutor Natalio Alberto Nisman in the Plaza de Mayo in front of the presidential palace in Argentina during a Jan. 19 protest convened over the social networks. His murder shook the entire nation. Credit: Fabiana Frayssinet/IPS

BUENOS AIRES, Jan 21 2015 (IPS) - The death of a special prosecutor investigating one of the biggest unresolved mysteries in the history of Argentina, the bombing of a Jewish community centre over 20 years ago, has put to the test an immature democracy that is caught up in a web of conspiracy theories and promiscuity between the secret services and those in power.

The victim was Natalio Alberto Nisman, found dead Sunday Jan. 18, the day before he was to present to Congress alleged evidence that President Cristina Fernández had taken part, according to him, in a cover-up of five Iranians suspected of involvement in the Jul. 18, 1994 attack on the AMIA building which left 85 dead and 300 wounded.

The scene of his death – which officials have described as occurring in mysterious circumstances that prompted the need to investigate whether he was pressured to kill himself, under threat – was his apartment in the Puerto Madero neighbourhood in the capital of Argentina.

“This mystery is similar to the story ‘The Murders in the Rue Morgue’ that Edgar Allan Poe published in 1841: doors locked from the inside, no balcony, on the 13th floor of an apartment building not accessible by any other means, the body collapsed on the floor of the bathroom blocking the door…one single shot to the temple and without the intervention of another person,” wrote journalist Horacio Verbitsky in the pro-government newspaper Página 12.

Argentines tend to turn to noir novels to describe their own history.

Among the highest-profile unresolved crimes is the disappearance of the hands of the embalmed corpse of former president Juan Domingo Perón in 1987, blamed on a ritual by the Masonic lodge known as Propaganda Due, or P2; an attempt to deal a blow to the country as it had recently returned to democracy in 1983; or an effort to symbolically destroy the cult surrounding the late leader who governed the country from 1946-1955 and 1973-1974.

But in the current global scenario and not so long after the 1976-1983 military dictatorship, which left 30,000 people “disappeared”, the prosecutor’s death has revived the sensation of vulnerability and “déjà vu”, with ingredients from a modern-day police novel.

“We’re all vulnerable. Today they came for him, tomorrow they’ll come for us,” Rita Vega, a teacher, told IPS while taking part in a Jan. 19 protest in the Plaza de Mayo, the square in front of the presidential palace.

The demonstration was convened over the social networks under the theme “I am Nisman”, inspired by the “I am Charlie” campaign that followed the Jan. 7 attack on the French satirical weekly newspaper Charlie Hebdo in Paris.

“Argentine democracy, which is entering its 32nd year, is solid and peaceful enough to weather blows like the one dealt by the death of prosecutor Alberto Nisman,” international analyst Martín Granovsky told IPS.

His death has once more divided Argentine society, between those who from the political opposition blame the centre-left Fernández administration for Nisman’s death and government supporters who say the prosecutor committed suicide because he didn’t have proof to back up his accusations, or was “induced” to kill himself.

Ronald Noble, the head of Interpol until late 2014, refuted Nisman’s accusations (based on wiretaps) that the president and officials close to her had asked for the cancellation of international arrest warrants against five Iranians suspected of involvement in the 1994 attack on AMIA, the Asociación Mutual Israelita Argentina Jewish community centre.

On Jan. 14, Nisman accused Fernández of a cover-up aimed at “forging closer relations with the Iranian regime and fully reestablishing trade ties to ease Argentina’s severe energy crisis, through a swap of oil for grains.”

Granovsky, the analyst, said “The AMIA case has a basic problem: when Carlos Menem was president (1989-1999), the state did not carry out an in-depth investigation into the bombing in the first few days, and in addition the complicities generated by the security forces’ side business dealings stood in the way of a serious probe.”

The president brought up that hypothesis, in her first statement on Nisman’s death, through Facebook, stressing that it “suggestively” happened just before the start of the trial for the cover-up of the attack, in which Menem, a former intelligence chief and others are implicated.

The head of the lower house of parliament, lawmaker Julián Domínguez of the governing Frente para la Victoria, said “we want to know what event or what mafioso sector prompted Mr. Nisman to take the decision he took.

“We are certain that there are segments of the intelligence community, the last redoubt that democracy has not yet been able to penetrate, seeking to create signs of instability and to pressure judges,” he said.

In December, the government removed Antonio ‘Jaime’ Stiuso as director of operations in the Intelligence Secretariat.

The ties between Stiuso and Nisman were well-known, and according to government leaks it was Stiuso who made the prosecutor come back early from his vacation in Europe in the middle of the judicial break to make his presentation to the legislature on Monday Jan. 19.

Néstor Pitrola, a legislator with the Workers’ Party, which forms part of the opposition Frente de Izquierda (Left Front), pointed out that Nisman was named special prosecutor in the AMIA case by late president Néstor Kirchner (2003-2007), Fernández’s predecessor and husband. But “a political shift created an internal war in the justice system and the intelligence services,” he said.

According to Pitrola, the prosecutor’s death revealed the presence of “an intelligence state within the state.

“Three weeks before Nisman made his allegations, the intelligence services were beheaded to the benefit of a new intelligence clique, led by (César) Milani, a repressor during the dictatorship who has been questioned by the justice system,” he said.

Atilio Borón, a former executive secretary of the Latin American Council of Social Sciences (CLACSO), said Nisman’s death especially hurts the government, which is the most interested in disproving the prosecutor’s supposed evidence, in a year when both presidential and legislative elections are to be held.

“He was a man who was very mixed up with the services, people you don’t play around with. You don’t fool with the CIA (U.S. Central Intelligence Agency), you don’t play with the Mossad (Israel’s secret service). He took instructions from them; you can see the Wikileaks cables, which have never been refuted,” he said.

Borón also said the international context, “what some call the West’s war against Islam,” should not be ignored.

In that vein, Gustavo Sierra, a journalist with the opposition daily Clarin, referred to “speculations of international intelligence” on the role that Iranian agents or their allies might have played in the prosecutor’s “induced” death, because he might have hurt their interests.

“Could Iranian intelligence have induced Nisman to commit suicide by threatening to kill one of his daughters, who lives in Europe? Did they have compromising information that implicated the prosecutor? Did they manage to make it through the Puerto Madero apartment building’s security barrier using some agent who was able to make it look like a suicide, without being detected?” Sierra wrote.

The plot is too complex, and even the mystery that gave rise to it has never been resolved: who was responsible for the worst attack suffered by Argentina, in a saga that Fernández described as “too long, too heavy, too hard, and above all, very sordid.”