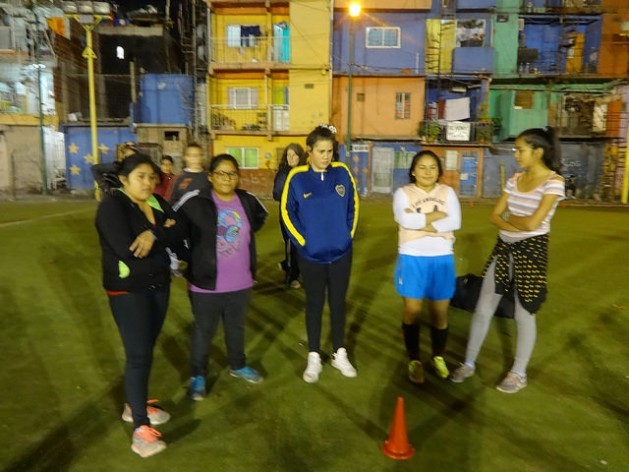 Girls from the La Nuestra football team wait to start their twice-weekly training in the Villa 31 shantytown in Buenos Aires. They often have to cut short their practice when boys take over the local pitch. Credit: Fabiana Frayssinet/IPS

BUENOS AIRES, Jul 6 2015 (IPS) - During a women’s football match in a poor neighbourhood in Buenos Aires, team manager Mónica Santino has to stop the game and ask a group of boys and young men not to invade the pitch where they’re playing. This frequent occurrence is just one symbol of a struggle being played out, centimeter by centimeter, on Argentina’s pitches.

“Come on, stop just for a while, we’re leaving soon. Don’t get in the middle of our game,” Santino said, trying to persuade in a friendly way the boys and teenagers who bully their way onto the pitch where the women’s match is going on, in Villa 31, a shantytown of 40,000 people on the northeast side of Buenos Aires, right in the middle of the upscale Retiro neighourhood.

“If it was a men’s match they would never do that, because they would have serious problems. But since it’s girls who are playing…” she commented to IPS one night the La Nuestra team was playing.

Although girls and women make up half of the population of this ‘villa miseria’, as shantytowns are called in Argentina, it hasn’t been easy for them to gain a place on the football pitch, traditionally men’s territory.

“Playing football here, the girls have two hours when they don’t have to think about anything else, when they just have fun, and forge ties with other young women. Many things that happen for us are political, they have a revolutionary component, because something is changing.” – Mónica Santino

“They think football and the pitch are for them,” one of the players, 15-year-old Agustina Olaña, told IPS.

When the project began in 2007, they had to mark off the area they were using with cones and stones. Now they practice twice a week.

“It doesn’t seem like such a big deal, but this achievement sends out an extremely important message about gender because football pitches are the most important public spaces in the barrios,” said Santino, a 49-year-old former football player who was the first woman coach in the Argentine Football Association.

“We live in a country where football is the national sport – it explains us as Argentines, it represents us in world championships, but in football women are still second-class citizens,” she lamented.

La Nuestra (Ours) is also an organisation that seeks greater access to football for women, using the sport to empower them, build self esteem and boost gender equality.

The project initially only targeted teenagers. But it was soon overwhelmed by the spontaneous demand from girls and adult women. Of today’s 70 participants, half are between the ages of six and 12, and the rest are over 13.

“For presents, I would get dolls or little balls, but I wanted footballs,” said one of the students, nine-year-old Florencia Carabajal.

“It seems to me that men haven’t learned that we can also play,” said 10-year-old Juanita Burgos, who hopes to become a professional footballer. “The boys used to call me a tomboy. But now they don’t say anything to me anymore. I tell them that if I want to play ball, who are they to say I can’t.”

But her dream is not an easy one for women to reach in Argentina, even though this country won the World Cup twice and has produced legendary players like Diego Maradona and Leonel Messi.

In women’s football, Argentina has never won a global championship. According to Santino, that’s because the big clubs believe “it isn’t a good show, and doesn’t generate money,” which is why Argentina doesn’t invest in women players as other countries do.

“No club has the structure for lower divisions or for girls to start training as players at an early age, which is when you grow as an athlete and get ready to compete,” she said.

“When Argentina has participated in international tournaments, it has been painful, because when we play against teams like those of Germany or the United States, they score 11, 13, 15 goals,” she said.

“Then the brutal criticism starts: that the Argentine jersey can’t be sullied, or that the country can’t be publicly embarrassed that way. But you can see here that we don’t have the infrastructure. Their arguments are really unfair,” said Santino.

“I was fortunate to be on the team, to have played in a world cup, but we really did it on our own, at great sacrifice,” said the La Nuestra coach, 33-year-old Vanina García, who had no choice but to keep working while playing football.

Santino is pushing for the project to be replicated in other barrios, and to that end she draws on her experience as a scout for street soccer for the homeless. She also hopes to create a women’s football club, where the women will not only play but will discuss issues such as sports and gender as well.

“We have managed to do it with the sweat of our brow,” she said.

According to Santino, an activist for women’s rights in sports and a member of the non-governmental Women in Equality Foundation, “this is a pending issue on the feminist agenda.”

“Women are not expected to run, sweat, make an effort,” she said. “They say that if you play football, your body will turn into a man’s body. There’s a widespread idea that all women who play football are lesbians.”

“I believe this involves the same thing as when we’re talking about the right to have an abortion and all the different kinds of prejudice that emerge. It’s a way of controlling women’s bodies, saying what they should look like,” she said.

For Santino, women’s football provides a good excuse to talk about other feminist demands, such as the right to rest and recreation.

“To come to a game, the big burden was the housework,” she said. “They would come after washing the dishes, or taking care of their younger siblings or their own children, starting at a really young age. Things that women are supposed to do. Boys, on the other hand, get home from school, dump their backpacks, and come to the football pitch directly.”

“Playing football here, the girls and women have two hours when they don’t have to think about anything else, when they just have fun, and forge ties with others. For us, a lot of what is happening is political, it has a revolutionary component, because something is changing,” Santino said.

For Karen Marín, 19, who sells chicken and came to this country from Bolivia with her parents when she was eight years old, La Nuestra has offered a way to make friends and become part of Argentine society.

“I suffered from discrimination because I’m Bolivian, and I would draw into myself and just stay in my room,” she said. “One day they invited me here. I’ve never missed a day since. Football helped me with everything, and it especially helped me to be more easy-going and open.”

Despite the difficulties, coach García believes women’s football, which is now practiced in schools and in most neighbourhood tournaments, is more widely accepted.

“I suppose that’s because women have taken on another role,” she said. “In a lot of areas, but in football as well. Women stand up for themselves, and if they want to play football, they play.”