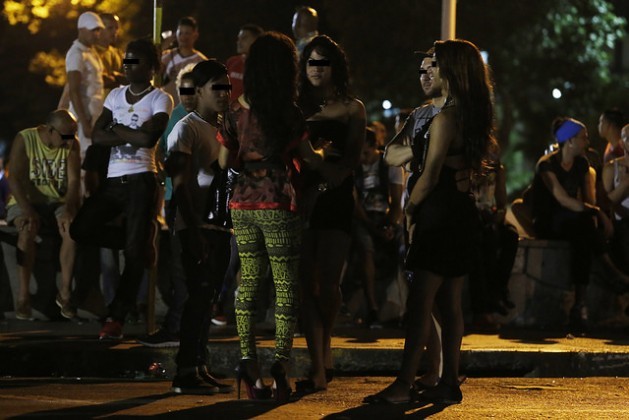 At night, groups of people from the lesbian, gay, bisexual, transsexual and intersex (LGBTI) community gather in meeting spots like this one in the El Vedado neighbourhood in Havana, Cuba. Others go to cruising spots for quick anonymous sex. Credit: Jorge Luis Baños/IPS

HAVANA, Nov 13 2015 (IPS) - When night falls, young men can be seen sitting on a dismantled bus stop on a remote hill far from the centre of the Cuban capital. Later they climb uphill to have sex with other men in the thick forest.

“On my way home from work, I go by that place, and I always see people gathered at the old bus stop,” 36-year-old biologist Daniel Hernández told IPS. The spot he was talking about is near the Calixto García Hospital in Havana’s El Vedado neighbourhood.

“People have lost their inhibitions. I can see they’re more out in the open in that area, where everyone knows why people go there. They’re not so afraid anymore,” said Hernández, who is himself gay and says he has occasionally gone there and to similar gay cruising spots in Havana.

Remote, isolated spots in Cuba’s cities, like forests, coastal areas or abandoned buildings, are colonised at night by men seeking quick anonymous sex with other men.

These cruising spots, known here as “potajeras”, represent a challenge for the work of prevention of HIV/AIDS, say activists, researchers and men who have sex with men (MSM) who spoke to IPS.

“I have witnessed unprotected group sex. All kinds of people go there, and not everyone has an awareness about the epidemic,” said Hernández, who described the potajeras as “key to the spread” of HIV/AIDS.

In his view, gay meeting places are necessary, but “not the remote spots that exist, where people are extremely unprotected due to the risk of infection and violence.”

MSM make up 70 percent of those living with HIV/AIDS. But women represent a growing proportion: 21 percent today, up from 18.5 percent in 2013, according to official figures.

Curbing the slow steady growth of new cases is a challenge that requires a greater prevention effort in this socialist island nation where healthcare is free and universal, including antiretroviral treatment for people living with HIV/AIDS.

The good news is that on Jun. 30, Cuba became the first country across the globe to receive World Health Organisation (WHO) validation for eliminating mother-to-child transmission of HIV and syphilis.

“In health promotion interventions we emphasise the risks of having sex in a place without minimum conditions,” said Avelino Matos, coordinator of community work with the MSM-Cuba Project, a network of 1,800 volunteer health promoters who have been working for 15 years to prevent the spread of HIV/AIDS among the most vulnerable segment of society.

In these remote areas, “there’s no light and people are nervous, so it’s impossible to negotiate the use of a condom,” Matos told IPS. 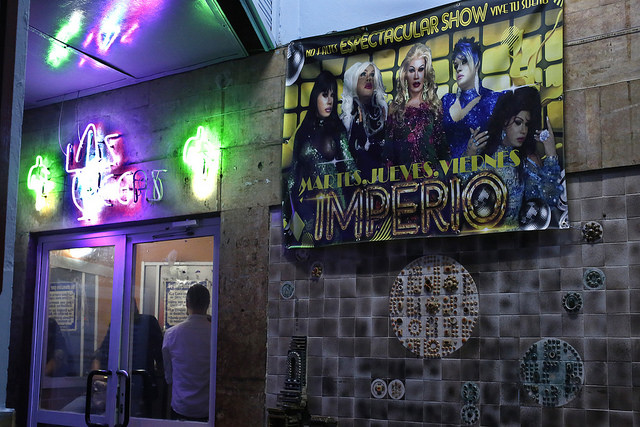 The entrance to a nightclub in Havana’s El Vedado neighbourhood, which offers drag queen shows and is a meeting place for people from the lesbian, gay, bisexual, transsexual and intersex (LGBTI) community. Credit: Jorge Luis Baños/IPS

The project, which falls under the umbrella of Cuba’s National Center for the Prevention of STDs and HIV/AIDS and is active in all 15 provinces, monitors MSM cruising and gathering spots, with an emphasis on the 49 municipalities that have top priority because they have the highest HIV/AIDS rates.

Matos described gay hangouts or socialising places – by contrast with cruising spots – as public spaces where MSM gather to meet each other, chat, and arrange dates.

He said the project’s health promoters are present around the country, although the ones in the capital are the best-known.

According to Matos, the project’s prevention work does get results, and today is using new strategies, targeting gay meeting spots in parks and on city street corners and in the growing number of gay bars, cafes and private parties.

But he lamented that they barely reach the potajeras, although in some provinces ingenious interventions have been carried out.

In the daytime, activists hang bags of condoms on tree branches, for example, in cruising spots in the central province of Villa Clara and the eastern provinces of Holguín and Granma.

And in a shantytown in the western province of Mayabeque, the project provided training in health promotion to two-seater bicycle taxi drivers, the form of transportation used to reach the cruising spots. The drivers were also given condoms, to hand out to their passengers.

Matos said it is difficult to reach bisexual men with HIV/AIDS prevention messages, because they face more prejudice than homosexuals. “That’s why they are less likely to admit to their sexual orientation; many hide their meetings with men and maintain relationships with women,” he said.

Homophobia is a major factor contributing to the spread of HIV and others STDs in the cruising sites.

“These are places in the here and now. But with this I don’t mean that everyone who engages in cruising has unprotected sex,” said Jorge Carrasco, a young journalist who in 2013 reported on the main cruising spots in Havana, such as the Playa del Chivo beach and areas around the Calixto García Hospital.

“Because of the anonymity, a lot of sick people feel better there, because they can have quick sex without the need to talk about their lives with the other person,” said the 25-year-old reporter, who defends these places as “cultural spaces” that are legal under Cuba’s current laws.

Carrasco warned of other dangers in these places, where assaults and even murders are reported, as well as police abuses. “The police, instead of only arresting the thieves, also arrest the homosexuals,” said the reporter, who recommended more training for the national police.

Amaya Álvarez, a legal adviser at the governmental National Sex Education Centre (CENESEX), told IPS that “the largest number of legal complaints by the homosexual and transgender population in the meeting places are in response to the interaction with law enforcement bodies like the police.”

For that reason, she said, CENESEX organises awareness-raising workshops for police officers.