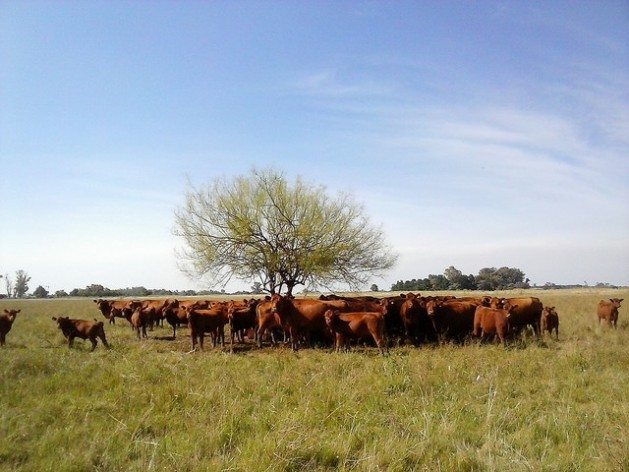 Latin America produces 23 percent of the world’s beef, which is the backbone of the flourishing regional livestock sector, although this activity poses a threat to the region’s sustainability. In the picture, a small herd seeks shelter around the only tree in the pasture, in the Argentine pampas. Credit: Fabiana Frayssinet/IPS

SANTIAGO, Sep 4 2016 (IPS) - Stockbreeding generates enormous profits in Latin America, but it also has a broad and varied impact on the environment, which means it must urgently be turned into a sustainable, green-friendly, socially accepted and profitable activity.

“Latin America cannot continue to ignore, from a public policy point of view, the challenge of making stockbreeding sustainable,” biologist Javier Simonetti, from the Department of Environmental Sciences in the University of Chile, told IPS.

He added that stockbreeding has different costs for the region, “but they can be solved, they can be reduced through mitigation measures…I’m reasonably optimistic.”

“The expansion of livestock production in the countries of Latin America represents both an opportunity and a threat for sustainable development in the region. “ -- Deyanira Barrero

Latin America’s stockbreeding sector is strategic for food security, in the region and the world. According to figures from the United Nations Food and Agriculture Organisation (FAO), 25 percent of the calories and 15 percent of the protein consumed by Latin Americans are of animal origin.

Livestock contributes 46 percent of the region’s agricultural GDP, and is largely concentrated in just five countries, which account for 75 percent of production: Brazil, Uruguay, Paraguay, Mexico and Argentina, in that order.

However, the growing demand for products of animal origin has had a major environmental impact, which could be aggravated if forecasts of a 70 percent rise in global demand by 2050 are borne out.

“The expansion of livestock production in the countries of Latin America represents both an opportunity and a threat for sustainable development in the region,” FAO animal health officer Deyanira Barrero told IPS.

“On one hand, it’s an opportunity to generate wealth and mitigate poverty, if good political and policy decisions are made and sustainable, environmentally-friendly livestock production systems are promoted. On the other, it’s a threat if the activity continues to expand without taking into consideration the environmental costs and the potential effects in terms of the marginalisation of small-scale producers,” she said.

Latin America, home to just 13.5 percent of the global population, produces over 23 percent of beef and buffalo meat and 21.4 percent of poultry at a global level, and is the leading exporter of these products, as well as a major producer and exporter of pork and dairy products.

But a downside to this expansion is that 70 percent of the region’s pastureland suffers moderate to severe degradation. 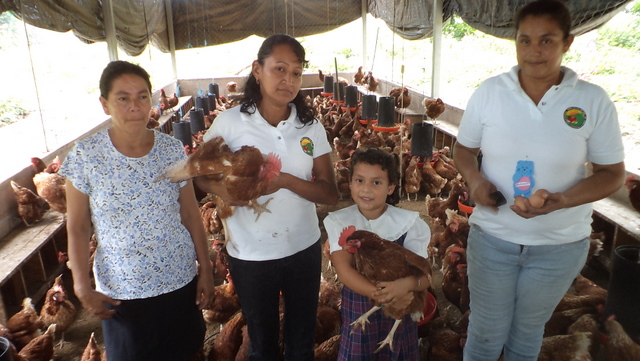 Members of a poultry cooperative in El Salvador, which generates income for the group of women that promoted the initiative and their families. Latin America is the world’s leading exporter of poultry. Credit: Edgardo Ayala/IPS

Production of beef and cow´s milk is responsible for most of these emissions, contributing 41 and 29 percent, respectively.

In Latin America, the areas most susceptible to the expansion of the livestock frontier are the Amazon rainforest in Brazil, the Chaco – a semi-arid expanse of dense thorn scrubland – in Argentina, Paraguay and Bolivia, and arid and semi-arid zones in Argentina and Chile.

Because of this, the experts say, decisive action must be taken so that growth in livestock production occurs in an environmentally sustainable manner that contributes, at the same time, to mitigating climate change, combating poverty, and improving human health.
In that sense, small-scale producers are key to attenuating the threats, said Barrero.

“Family livestock farmers are more exposed to the risks caused by climate change, but they are key actors in the mitigation of climate change because a number of their common practices help protect the environment,” she said.

Because of this, support policies are needed, as well as institutional frameworks and incentives, and more proactive governance to boost their integration and avoid marginalisation.

Simonetti asserted that “stockbreeding generates a set of environmental and social problems that are not effectively addressed by any public policy. With a few incentives, orientations or restrictions, they could go from a problem to at least something neutral.”

He pointed out, for example, that some 15,000 litres of water are used for each kilo of meat produced worldwide, and warned that “if we don’t reduce this enormous use of water, things will not go well.” And to do that, “everyone has to sit down and talk.”

During the 6th multi-stakeholder partnership meeting of the Global Agenda for Sustainable Livestock held in Panama in late June, the governments of the region emphasised the need to coordinate their livestock policies with rural development, social and environmental policies, in order to attain sustainability in this sector.

They pledged active participation by the region in the formulation and implementation of the Global Agenda work plans, based on priorities defined by the countries in the Commission on Livestock Development for Latin America and the Caribbean, whose technical secretariat is provided by FAO.

According to experts, local knowledge and the diversification of family farming production systems are the key factors in reducing the risks associated with climate change and natural disasters.

This should be done by “increasing the use of adapted local breeds which have been preserved by small-scale producers, as well as by using local drought-tolerant crops that can be used for both human and animal food.”

The FAO expert stressed that this is a shared responsibility of society as a whole.

“Climate change is a global issue and livestock supply chains are increasingly connected across borders. Thus, to be effective and fair, mitigation measures should also be global,” she concluded.