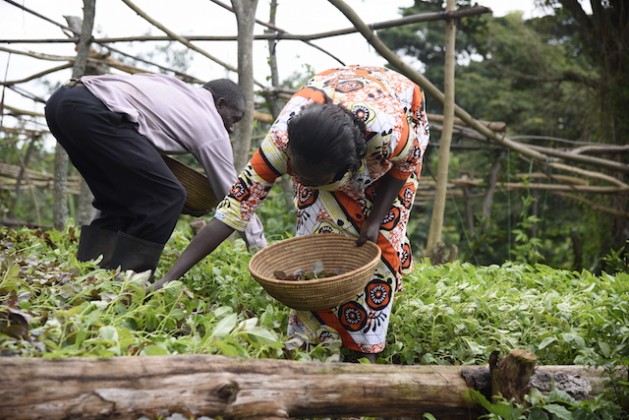 Mercy Ssekide from Uganda’s Mabende District working together with her husband on their farm. Credit: FAO

KAMPALA, Uganda, Jan 27 2017 (IPS) - Discussions around climate change have largely ignored how men and women are affected by climate change differently, instead choosing to highlight the extreme and unpredictable weather patterns or decreases in agricultural productivity.

Women constitute 56 percent of Ugandan farmers and provide more than 70 percent of agricultural production, nutrition and food security at the household level, according to the Women of Uganda Network (WOUGNET). However, despite the fact that women do most of the farm work, they only own 16 percent of the arable land in the country.

Cognizant of women’s labour burden and time poverty, FAO ensures that all project activities are gender inclusive and participatory.

“The intensive labour burdens on women, especially the unpaid care work in the household, has resulted in women having less time to practice the learning, knowledge and skills gained from groups in their farming activities,” Tereka told IPS.

Winnie Masiko, the gender and climate change negotiator for Uganda at the United Nations Framework Convention on Climate Change (UNFCCC), noted the lack of clear guidelines to incorporate gender in climate change projects.

“We need to develop a Gender and Climate Change Strategic Plan,” says Masiko.

The Ugandan Land Policy of 2013 grants women and men equal rights to own and co-own land, but this is not always the reality on the ground. Masiko says initiatives should focus on addressing embedded structural imbalances in order to bridge the gender gap, understand women and men’s varying needs, and pave the way for effective adaptation to climate change.

Edidah Ampaire, coordinator for Uganda’s Policy Action for Climate Change Adaptation project, says that women’s rights and contributions are extremely constrained, especially in rural areas, and that little is being done by government particularly through policy to address the imbalance.

Tereka stressed that promoting gender equality is at the core of FAO programmes and the U.N. agency has made deliberate efforts to ensure the inclusion of women in all their programs.

“It’s imperative that women get empowered and take part in decision-making at all levels – this way we can see them contributing effectively to the development of their family and nations,” Tereka said.

Through the Farmer’s Field School (FFS) methodology, “commonly known as schools without walls”, FAO has enabled both men and women with a common goal to receive training, share ideas, learn from each other through observation and experimentation in their own context. On average the FFS have about 60 percent women farmers participating.

Proscovia Nakibuye, a cattle farmer in Nakasongola district, said the FFS has taught her effective strategies to cope with climate change. “We have been taught good livestock keeping and to plant pastures,” says Nakibuye.

“Participants learn how to improve their agronomic skills through experimenting, observing, analysing and replicating on their own fields, contributing to improved production and livelihoods, The FFS process enhances individual, household and community empowerment and social cohesion.”

Nakibuye and her husband are seeing major changes both in their household and farming activities. “Before, my children were not going to school but now through increased sales of milk, I can afford a decent education for my children,” she said.

FAO has also utilized the Gender Action Learning Systems (GALS) – a community based tool that enables women and men to plan the future they want and take action against barriers, including societal norms that inhibit gender equality and justice.

Mercy Ssekide, a farmer in Mubende District, joined the Balyejjusa FFS. “If you don’t cooperate with your family, the farming won’t be successful – that’s why I had to encourage my husband to join the FFS in order for us to work as a team,” she says.

“We are trained and encouraged to work hard to handle climate change and in order to meet our household needs. During off season we grow tomatoes and earn some money as locals and traders come and buy from us,” says Mercy’s husband.

Together, as a family, they have diversified and ventured into poultry, goat and pig rearing, and kitchen gardening. The Ssekide family are now deciding as a team on the use of their income — and are able to afford giving their two children a university education.

FAO, with funding from European Union, is implementing the Global Climate Change Project in the central cattle corridor in the districts of Luwero, Nakasangola, Nakaseke, Mubende , Sembabule and Kiboga.

Cognizant of women’s labour burden and time poverty, FAO ensures that all project activities are gender inclusive and participatory – particularly adjusting meeting/learning time to ensure women are involved and benefit from the skills and knowledge on climate smart agriculture.

Tereka believes that with an increasingly unpredictable climate, skills development in climate smart agriculture is critical. She urged the Ugandan government to revamp its agricultural extension system to be more gender-responsive, in order for farmers – especially women to – effectively put to good use the inputs being distributed by government under Operation Wealth Creation.

The FFS methodology is now being implemented in 90 countries with 4 million farmers across the globe having improved their skills and adjusted positively to the effects of climate change.