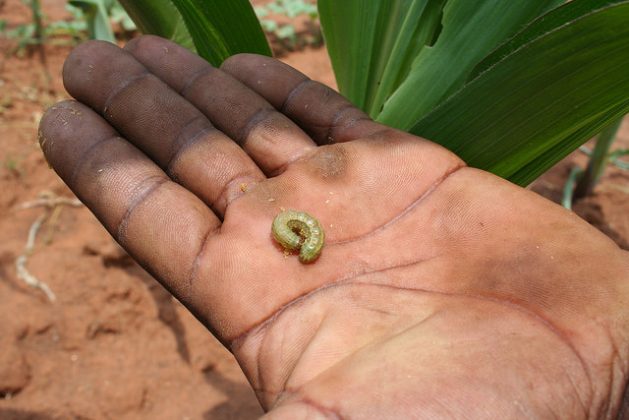 The fall army worm on the march. A farmer in Zimbabwe’s Gwanda District displays the pest that invaded his field. Credit: Busani Bafana/IPS

BULAWAYO, Zimbabwe, Jul 18 2017 (IPS) - Southern African countries have agreed on a multi-pronged plan to increase surveillance and research to contain the fall army worm, which has cut forecast regional maize harvests by up to ten percent, according to a senior U.N. Food and Agriculture Organisation (FAO) official.

An estimated 13.5 million tonnes of maize across Africa, worth 3 billion dollars, are at risk from the worms in the next year.

FAO Sub-regional Coordinator for Southern Africa, David Phiri, said Southern African countries have agreed on a region-wide strategy to contain the pest, known to attack more than 80 plant species, including staple cereals and vegetables. The agreed strategy includes undertaking national assessments to determine the impact of the pest on crop yields and using Integrated Pest Management (IPS), an environmentally friendly approach to controlling pests focusing on pest prevention and application of pesticides only as necessary.

“The Fall army worm is still a threat that is not going away soon,” Phiri told IPS in a telephone interview from Harare. “Depending on the country, the impact of the pest has been 2 to 10 percent reduction in yield and that is worrying for the region which has experienced a food crisis.”

The scale of the damage of the Fall Army worm is expected to be felt more on maize where over 741,316 acres of the cereal – the staple for more than 200 million people in most of Southern Africa – have been affected.

The United FAO says while it was too early to know the long term impact food security as a result of the outbreak of the pest, native to tropical and subtropical regions of the Americas, the potential for serious damage and yield losses were high. This has necessitated the development of a coordinated strategy to manage the pest ahead of the next agriculture season.

A consultative multi-stakeholder meeting in Nairobi, Kenya in April 2017 formulated a region-wide Framework for the Coordinated Management of FAW which involves surveillance and early warning, impact assessment, sustainable management and coordination of the pest. The Framework will guide the development of projects and programmes by governments, researchers, academics, farmers and other actors to contain the migratory pest which can reproduce quickly in the right environment.

Estimates from the Centre for Agricultural and Biosciences International (CABI), show that 13.5 million tonnes of maize worth 3 billion dollars across Africa are at risk from the FAW in the next year. It gets worse, in all confirmed and suspected fall army worm incident countries; there is total value at risk of over 13.3 billion dollars across all crops, according to a note on the recommendations from the Stakeholders Consultation meeting.

“While countries are doing vulnerability assessments, the biggest problem we have now is the next cropping season, “ said Phiri. “The pest is there and we have to manage it as it will affect next year’s production because we have not identified any particular pesticide that can control it and this is a race against time.”

The FAO, which is leading the response strategy for the FAW, is working with the government of South Africa to lead the research on technologies to help manage the pest. Earlier in July, the FAO met with experts from Latin America in Accra, Ghana, to see which if their management technologies could be applied in Africa. Brazil spends an estimated 600 million dollars annually to control the fall army worm.

“For sure we know that Integrated Pest Management works and that for large farms the judicious use of pesticides might be the only option and when that happens we need to identify a particular pesticide that is effective and at the same time foes not harm the environment and does not lead to resistance and hence the marathon meetings and research going on at the moment,” Phiri said, noting that the cost to control the pest was not yet determined for the region as countries were undertaking assessments.

FAO is developing a long-term IPM-based strategy for the sustainable management of fall army worm, including forecasting, crop monitoring, use of biological control options, resistant varieties and promotion of good agricultural practices and the use of pesticides as a last resort.

Kerstin Kruger, Associate Professor in the Department of Zoology and Entomology at the University of Pretoria, told IPS the recent arrival of fall army worm and other invasive species highlights the need for a strong scientific basis to respond to such threats.

Sub-Saharan Africa is economically highly dependent on agriculture and is considered to be amongst the most vulnerable regions to the economic threat posed by invasive species. Kruger said a thorough understanding of the biology of the pest and its interaction in its environment was key to its successful management.

North and South America have battled the FAW for decades and have developed a number of non-chemical management options ranging from planting of maize varieties that are less susceptible to FAW attack to monitoring with pheromone traps. In addition, biological control using natural enemies such as insect parasitoids, predators and microbial pesticides and BT-maize has been used.