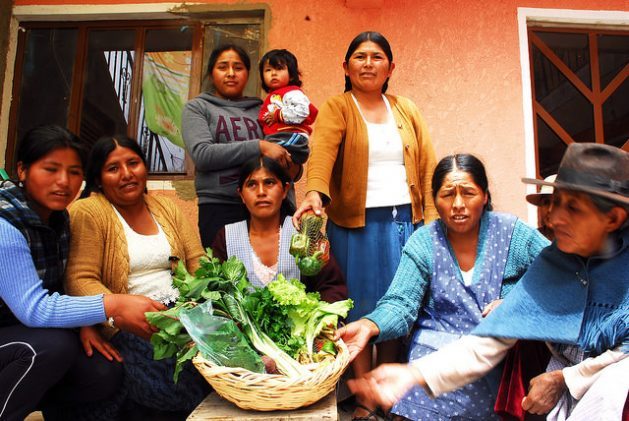 Indigenous women, such as these farmers on the outskirts of Sucre, Bolivia’s official capital, are part of a group with the most difficulties to overcome extreme poverty in Latin America, and therefore require specific policies to give them equal opportunities. Credit: Franz Chávez/IPS

SANTIAGO, Aug 29 2017 (IPS) - “There are 33 million rural dwellers in Latin America who are still living in extreme poverty and can’t afford a good diet, clothes or education, and we are not going to help them move out of poverty if we use the same strategies that worked 20 years ago,” FAO regional representative Julio Berdegué told IPS.

Since 1990, rural poverty in the region was reduced from 65 per cent to 46 per cent, while extreme poverty fell from 40 per cent to below 27 per cent.

To break that pattern in the most vulnerable rural group, the United Nations’ Food and Agriculture Organisation (FAO) and the International Fund for Agricultural Development (IFAD) are launching this last week of August in Santiago, Chile the “Alliance to end rural poverty in Latin America.” 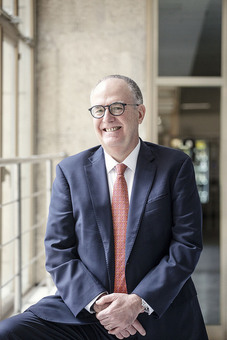 “There is a strong deceleration in the reduction of poverty, five times slower than before, only just 0.2 per cent per year,” noted with concern Berdegué, who attributed the phenomenon, among other causes, to a regional economic slowdown which has had an impact on employment and incomes.

“The strong, sustainable, solid solution to rural poverty is economic development in rural areas. Quality jobs, better wages: that is the best strategy to reduce rural poverty,” said Berdegué, who is also FAO deputy director-general, in the body’s regional office in the Chilean capital.

For Berdegué, “social policies compensate for the effects of economic development, but what we want is for people to stop being poor because they have better jobs and not because of good social programmes…that is a second best option.”

In his interview with IPS, the Mexican senior U.N. official said the region has already done a great deal to reduce poverty and extreme poverty and what remains is to eradicate the most difficult part of poverty, harder to combat because it is structural.

He cited the example of Chile, where less than three per cent of the rural population suffer from extreme poverty, but the people affected are indigenous women in remote areas, which makes the task of rescuing them from deep poverty especially complicated.

According to Berdegué, the policies and programmes created and implemented in Latin America to eradicate poverty successfully served their purpose ,“but not necessarily the same strategies and same programmes are the ones that will work for us in the final push” of putting an end to hard-core, entrenched poverty.

Luiz Carlos Beduschi, a Brazilian academic and policy officer in the FAO regional office,pointed out to IPS that one of the most significant programmes to combat poverty in Nicaragua consisted of giving extremely poor people chickens, pigs or pregnant cows along with technical assistance.

“The same policies that help rural men move out of poverty don’t work for rural women,” said Julio Berdegué, who stressed that in the region “we have a generation of women with levels of education that their mothers never dreamed of.”

“We must soon achieve labour policies that allow these women to fully accede to formal employment. They are all working a lot, but on their farms or in unpaid, informal work,” he explained.

“These young rural women under 35 are going to stay on their farms producing food, but many of them are going to be employed in manufacturing and services, in nearby cities or in the rural communities themselves,” he added.

The FAO senior official stressed that “economic empowerment and autonomy are key, absolutely key, and this requires policies designed with a gender perspective. Without this, we are not going anywhere.”

Another thing that is essential, he added, is access to financing because “a poor woman farmer goes to ask for a loan and a poor male farmer goes, and the chances that the woman and the man get it are very different.”

“In all elements that are necessary for the development of family agriculture: access to markets, to technical assistance, land, etc, we need to multiply them by two, three or four in order to guarantee women equal opportunities,” he concluded.

“A woman from District 7, in the periurban area of Managua, discovered a dormant entrepreneurial potential. She was given a cow, and today, eight years later, she has 17 cows. Her oldest daughter left to study and graduated as a dentist. The woman sold three cows to finance a clinic (for her daughter) in the neighbourhood. She is now involved in the economic and social fabric of that area,” Beduschi said. Her second daughter is now studying medicine.

He added that the beneficiaries of this programme do not so much need advice as other elements such as credit at an interest rate lower than the 20 to 30 per cent offered by local creditors.
“We have to design a new plan for new times,” he concluded.

Launching the new Alliance
More than 25 experts, researchers and decision-makers are meeting Monday 28 and Tuesday 29 in Santiago, summoned by FAO and IFAD to seek new strategies and instruments to combat rural poverty.

In this new Alliance Launch Workshop, the participants are identifying and disseminating a politically viable and technically feasible package of proposals to be implemented by Latin American governments, for each country to face the challenge of ending rural poverty from an innovative perspective.

The activities of this initiative will be carried out from now until July 2019, and will count on FAO resources for the initial phase.

Berdegué said the first successful result of the Alliance was bringing together this group of experts with the commitment of “putting their shoulders to the wheel” in seeking innovative solutions to put an end to rural poverty.

“We want to release the 1.0 version of a proposal that we are going to offer to the countries. Not more of the same, because that has us at a five times slower rate. And we want to produce the first ideas, the best that we can, but we don’t want to spend the next six months writing documents. The best that we can, the sooner we can, and with those instruments we will go to the countries,” he said.

“The meeting will be a successful one if we come out of it with a very concrete working plan, detailed in such a way that the following week we can be going to the countries, as we have already started to do in Ecuador and Nicaragua,” he told IPS.

“We have a specific work agenda for collaboration to put these ideas into practice, with public programmes and policies,” he added.

Among the new tools that are being discussed in the world and in Latin America, Berdegué pointed out the concept of a universal basic income, which has its pros and cons, and is hotly debated.

There is also the issue of rural labour markets “which are in general in a state of true disaster, with high levels of informality and very low female participation rates, among them young women who have received 10 to 12 years of schooling and have no job offers in line with this human capital they have acquired.”

And a crucial issue in the new agenda, not taken into account in the past decades, is inequality.

“Many of these 33 million poor are poor because they are first victims of inequality. A rural indigenous woman, in a less developed area, is victim of more than four inequalities: gender, ethnicity, rural and territorial. Besides, economic inequality, on grounds of social class,” Berdegué said.

“Good quality employment, better wages, that is the best strategy for reducing rural poverty. And we have an accumulation of inequalities that, if we do not solve them, it will be very hard to return to the rate of one percentage point of reduction of rural extreme poverty,” he concluded.

Academics, as well as government officials and representatives of social organisations are taking part in the FAO and IFAD meeting, joining forces to think about how to keep on combating rural poverty with the goal of eradicating it.