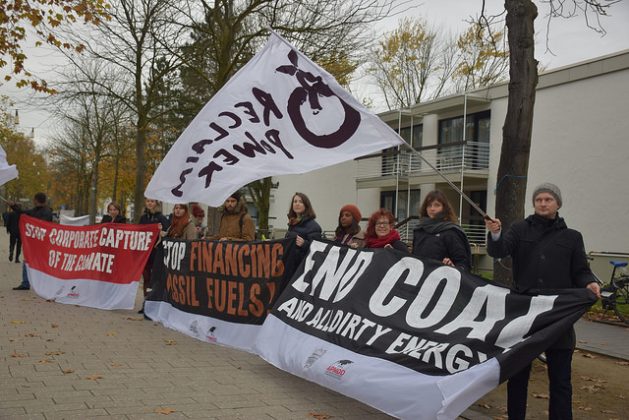 Protesters at the COP3 in Bonn demand the complete phase-out of coal, a major contributor to carbon emissions. Credit: Stella Paul/IPS

BONN, Nov 19 2017 (IPS) - As the summit of governments known as COP23 reached its conclusion in Bonn, Germany this week, two clear alliances have emerged in the global energy landscape.

One of them, the International Solar Alliance, was launched in Paris and is all set to become a legal entity. The other, an alliance to phase out coal, was announced on Dec. 16 in one of the biggest developments at COP23.

“Phasing out coal power is good news for the climate, for our health and for our kids." --Catherine McKenna, Canada’s Minister of Environment and Climate Change

The International Solar Alliance, on the other hand, is led by India – an emerging economy. Forty-four countries have already joined this alliance, of which 16 have also ratified it. As a result, the alliance will come into force on Dec. 6.

Launching the new alliance to phase out coal, Catherine McKenna, Canada’s Minister of Environment and Climate Change, said, “Phasing out coal power is good news for the climate, for our health and for our kids. Coal is literally choking our cities with close to a million dying every year from coal pollution. I am thrilled to see so much global momentum for the transition to clean energy – and this is only the beginning.”

The members of the new alliance, which aims to grow to 50 by the next COP in 2018, would not only phase out coal in their own countries by 2030 but also stop investing in coal-fired electricity both within and outside of their countries.

In sharp contrast, the members of the other alliance – the ISA – are reluctant to make any commitment to end coal energy before 2030. India, the leader of the alliance and a major coal producer, argues that coal is needed to end poverty and provide its poor citizens access to electricity. The country plans to produce 1.5 billion tons of coal by 2020 – double the amount it produces now.

“From the Indian perspective, let me make it very clear: there are development imperatives which as a country we need to fulfill. If you look at the total emissions, our contribution is miniscule. The point is, while this factor is spoken of, what is not spoken [about] is India’s extreme effort at trying to get energy much better,” said India’s Environment Secretary in a definite statement to the press.

“Today we are talking of producing 175 gigawatt of energy from renewable sources by 2022. Of that 120 GW will be from solar and the rest from biomass and others. Coal will continue to be used for some time, but we are continuously looking at alternative sources of energy.”

Anand Kumar, secretary at India’s Ministry of New and Renewable Energy, said that IAS’s core goal is to bring 121 countries on a single platform to explore ways to utilize and promote solar energy.

Besides production, the alliance would also focus on making solar energy cheaper and more accessible by garnering investment, bringing down the cost of solar cells, solar modules and solar storage.

The other prominent members of the alliance – China, Australia and New Zealand – still heavily invest in coal, even as they’re trying to produce more energy from renewable sources. At the COP, soon after the emissions report was presented by the University of East Anglia, Brazil, India, South Africa and China – known as the BASIC countries – released a joint statement reiterating their right to grow and asking the world to look at their emissions from the perspective of equity.

No coal vs no unabated coal

However, even as the new Global Alliance to Power Past Coal was announced, some of the statements raised doubts over whether the alliance only wanted to end unabated coal or coal in general.

Unabated coal refers to plants that are not fitted with carbon capture and storage (CCS) technology, which captures the harmful emissions that cause global warming.

According to Claire Perry, Minister for Climate Change and Industry in the UK and one of the alliance’s leaders, unabated coal was “the dirtiest” and her country would try to end using it. “The UK is committed to completely phasing out unabated coal-fire power generation no later than 2015 and we hope to inspire others to follow suit.”

Perry did not elaborate if the UK or the new alliance would still support use of abated or partially abated coal.

India, which otherwise refuses to end its use of coal, is also in favor of using partially abated or so-called “clean coal.” Says C K Mishra, “We are also looking at making use of better quality coals.”

Interestingly, Germany – which provided the venue for COP 23 – has not announced its intention to join either of these alliances. This has been severely criticized by anti-coal activists who have accused Germany of having a double standard by organizing the climate conference while not taking a strong step on either ending coal or shifting to renewable energy.

On Nov. 15, as Angela Merkel reached the COP to address the parties, the activists laid out a red banner that read “keep it in the ground” for the chancellor to walk on.

“We want no coal. We want no dirty power,” said one of the activists who was not allowed inside the conference.