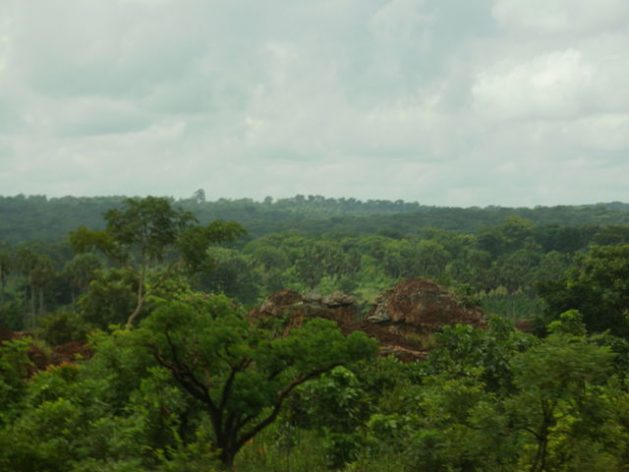 Forested hills in Guinea’s Kintampo area. Barely a quarter of the population has access to electricity. Credit: CC by 3.0

KINSHASA, Democratic Republic of Congo, Jun 26 2018 (IPS) - The West African nation of Guinea may be a signatory of the Paris Agreement, a global undertaking by countries around the world to reduce climate change, but as it tries to provide electricity to some three quarters of its 12 million people who are without, the commitment is proving a struggle.

Mamadou Bangoura, head of planning and energy management at Guinea’s Ministry of Energy, told IPS that his country faced a major challenge implementing its programme for the development and provision of energy resources to all citizens at a lower cost. According to the United Nations Environment Programme, only 26 percent of the population has access to electricity.

“Our main concern is to find a balance between the implementation of this programme and the protection of biodiversity." --Mamadou Bangoura of Guinea’s Ministry of Energy

“Our main concern is to find a balance between the implementation of this programme and the protection of biodiversity. This is further compounded by a requirement to take into rigorous account the environmental and social aspects in the framework of the realisation of any infrastructure project,” Bangoura explained.

According to conservation organisation Fauna and Flora International, Guinea’s wildlife is already under threat. “Conservation solutions need to be found that enable people to make a living while protecting their natural assets into the future,” the organisation reports.

Unlike other African nations that are heavily reliant on fossil fuels, only 43 percent of Guinea’s electricity is generated from this as more than half (55 percent) is produced by hydropower.

The country’s potential for hydropower is significant. Guinea is regarded as West Africa’s water tower because 22 of the region’s rivers originate there, including Africa’s third-longest river, the Niger.

Bangoura added that despite the challenges, his country was making progress and several hydropower projects were being constructed. The Kaléta project, which will produce 204MW, is already completed. However, the Souapiti (459MW) and Amaria (300MW) hydropower plants “are still work in progress.”

He said negotiations were also underway for the construction of a 40MW solar power and a 40MW power plant. “Concession and power purchase agreements are being finalised,” he added.

In the Gambia, challenges in implementing renewable energy exist also. The small West African nation of only 1.8 million people is considered to be rare in its ambitious commitment to reduce greenhouse gas (GHG) emissions — it pledged a 44 percent reduction below its business-as-usual emission level. It’s a big task as currently around 96 percent of all electricity produced in the country comes from fossil fuels.

Sidat Yaffa, an agronomist with expertise in climate change at the University of The Gambia, told IPS there were barriers to renewable energy programmes because the sector was still new to the Gambia.

“Therefore, a better understanding of the technology is still a challenge, securing adequate funding for implementation is a gap, and availability of trained human resources using the technology is also a gap,” Yaffa said.

“The agriculture sector’s GHG could be drastically reduced in the next five years in the Gambia if adequate solar panel water irrigation technologies are implemented,” Yaffa added.

Cote d’Ivoire also has strong ambitions for the development of reliable and profitable renewable energies, a cabinet minister said last year, adding that the country is committed to produce 42 percent of its energy through renewable energy.

This week representatives from Burkina Faso, Cote d’Ivoire, the Gambia, Guinea and Senegal will meet in Burkina Faso’s capital Ouagadougou to discuss both the challenges and successes they have had in reaching their nationally determined contributions (NDCs). NDCs are blueprints or outlines by countries on how they plan to cut GHG emissions.

The regional workshop, the first of its kind, is hosted by the Global Green Growth Institute in association with the International Renewable Energy Agency and the Green Climate Fund.

It aims to enhance capacity for NDC implementation, share experiences and best practices, and discuss renewable energy opportunities and associated challenges in the region.

This regional cooperation is a significant step forward as 60 percent of the West African population living in the rural areas continue to depend on firewood as their primary source of energy.

In the Gambia and Senegal a quarter of the rural population has access to electricity, while the number is slightly higher in Cote d’Ivoire with about 29 percent having access.

But in Guinea and Burkina Faso only three and one percent of the respective rural populations have electricity.

The World Bank’s 2017 State of Electricity Access Report makes the link that energy is inextricably linked to every other critical sustainable development challenge, including health, education, food security, gender equality, poverty reduction, employment and climate change, among others.

The Agence Française de Développement acknowledged the benefits of rural electrification programmes, stating, “(they) have the opportunity to reach more poor households and have larger impacts in the lives of the rural poor by providing new opportunities and enhancing the synergies between the agricultural and non-agricultural sector,”

Bangoura has acknowledged his country’s challenge to electrify rural areas. He said his government has just created the Guinean Rural Electrification Agency and launched a couple of projects, including a collaboration with the Electricity of Guinea, that will pave the way for the electrification of rural areas.

However, SVI said while most governments had set up rural electrification agencies or funds, the impact of such organisations may be hampered by a lack of financial and technical expertise. Hence the need to turn to international institutions and experts for capacity building and green energy finance.

Bangoura agreed that one of the problems his country is struggling with is implementation. “The problems at this level lies in the adaptation of the texts of the country to those governing the Paris Agreement…Hence the importance of this workshop that is focusing on capacity building.”