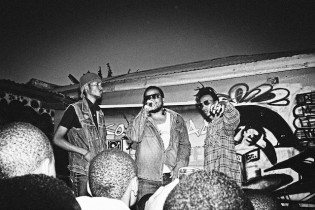 By Fabiana Frayssinet
Anarkia Boladona has turned the streets of Brazil into billboards against domestic violence. As a self-titled feminist political graffiti artist, she represents a new trend in women’s rights that seeks less academic and more daring and popular avenues of expression.

By Marcela Valente
Artists-in-residence, once found only in the industrialised North, can now be found throughout Latin America, which is hosting artists from different parts of the world to produce and exhibit their work. There are also opportunities for visiting artists simply to seek inspiration.

By Zofeen Ebrahim
The silencing of music in the name of Islam led Pappu to give up the cello and set up a tea stall. But Pappu and other musicians survived the Islamist regime for former dictator Zia ul-Haq and the recent ways of the Taliban to return to the most surprising group of musicians to have emerged over years – on a dusty little street in the Pakistani city Lahore.

Israel-Iran Matters Get Worse in Verse

By Pierre Klochendler
A lyrical attack by Germany’s acclaimed novelist and essayist Günter Grass in which he labelled Israel’s alleged atomic arsenal and looming pre-emptive strike on Iran’s nuclear installations a threat to world peace has triggered fury and controversy amongst Israelis.

After the Murder, a New Act at Freedom Theatre

By Jillian Kestler-D'Amours
Actors, musicians, activists and friends gathered in various locations throughout Israel and the West Bank this week to commemorate the life of actor and theatre director Juliano Mer-Khamis.

By Zofeen Ebrahim
By winning an Oscar at this year’s Academy awards, filmmaker Sharmeen Obaid-Chinoy has brought home the genius of Pakistan’s women as well as the extreme violence they often suffer in a male-dominated society.

By Zofeen Ebrahim
Dark and smoky, the cinema hall reeks of hashish. An overly made-up woman on screen in provocatively figure-hugging clothes dances suggestively to the beat of loud music. The audience, all men, cheer and whistle. The music stops, the scenes get racier and sexually titillating. The crowd abandons all caution. The whistles turn to grunts and growls, chairs begin to bang.

By Daan Bauwens
Women have been at the forefront of each uprising in the Arab world. Last week, the ‘8 Arab Women Filmmakers’ festival offered a platform to Arab women directors to give their perspectives on the future of the region.

By Jillian Kestler-D'Amours
Palestinians in East Jerusalem can once again go to the movies, after Al Quds Cinema reopened its doors this week after being closed for 25 years. Organisers say this signals the rebirth for Palestinian arts and culture in the city.

By Kalinga Seneviratne
A landmark concert featuring artistes from eight of the ten South East Asian Nations (ASEAN) took place here on Jan. 21, in an effort to build a regional community through the common language of music.
Next Page »
ADVERTISEMENT ADVERTISEMENT