NAIROBI, Mar 4 2009 (IPS) - Two understaffed and ill-equipped public clinics serving 600,000 people: it is in neighbourhoods like Dandora that the battle to reduce maternal mortality is won or lost. 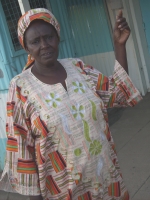 Residents of this poor neighbourhood on the outskirts of Nairobi often have to rely on their own experience – or turn to quacks – for maternal care or any other medical needs.

Six years into the United Nations MDG deadline, Kenya is still lagging behind in reducing maternal mortality (MM) by three quarters by 2015.

IPS spoke candidly with Evelyn Mutio, a retired nurse, who now works to provide quality care to the people of Dandora and beyond. Her private clinic, Mkunga Nursing Home, established in 1995, offers mainly reproductive health services to the deprived community – at rates lower than those charged in public health facilities.

IPS: The latest official figures for maternal mortality in Kenya are from 2003: Has the country made any progress since then? Evelyn Mutio: The situation has not changed since 2003. If it has, it is not for better, for the simple reason that not all of the deaths are recorded. There are women who go to the big hospitals, where deaths are recorded, but what about the ones who die giving birth at home?

Or those in the slum areas like here, where by the time I get to know that a woman has complications due to pregnancy, the community has tried to attend to her, causing a lot of delay in seeking professional help.

By the time they decide to take her to hospital, after deliberating which hospital they can afford, they start with my clinic, down down on the ground. But then they come too late, and I can not do what is needed; then I forward the case to Kenyatta hospital (Kenya’s chief referral hospital) or Pumwani Maternity Hospital (the largest public maternity hospital).

By the time they find the means to get there, it’s too late. Sometimes they come back to me and report, “When we got there we were told to go to the mortuary.”

IPS: So what do you think should be done? EM: It is important to increase the number of health care facilities and bring them closer to the populations and reduce costs or even offer free services so that people can access professional treatment in hospitals. The situation is even worse in the rural areas, like in Eastern Kenya, where I also work. Women with pregnancy complications die on the way as they walk miles and miles to access a health facility.

Not only should more hospitals and clinics be built, but they should be staffed with skilled health workers and equipped to handle complications, rather than referring patients all the way to Kenyatta National Hospital in Nairobi.

IPS: What other factors contributing to maternal mortality are you are worried about? EM: I am also worried about deaths caused by unsafe abortions. Women and girls can be pregnant and people do not know, because they are hiding the pregnancy for whatever reason. They do not want the pregnancy and must get rid of it. They will do anything to terminate the pregnancy.

Sometimes they come to us and say “I would rather die than carry the pregnancy.” These are the cases that worry us more. I am saying this because if a mother does not want the pregnancy, she will go silently to the backstreet or quack, have an unsafe abortion and then get complications.

Once she finds it is not what she expected, she is bleeding too much and may die, then she will shout- and because we are nearest to the community, she will be rushed here. Then we can give the treatment, stop the bleeding and save the life of the mother.

IPS: How widespread is this problem? EM: We have been getting between 20 and 30 patients in a month. The figure has gone down slightly. But unsafe abortions are happening and it is a serious problem that should be addressed because it contributes a lot to maternal mortality.

IPS: What are the challenges in addressing this problem? EM: There are so few health care providers, who know what to do. So we need more health care workers, first of all to create awareness among the community on how to avoid unwanted pregnancies. This information is lacking.

Also, information about the different kinds of contraceptives is crucial. The acceptance of some of the contraceptives is still very low. Like now we are trying to advocate for IUD (inter uterine device) which is a long term family planning method that is so easy to administer, and there is no risk of forgetting it like in the case of the pill. But a lot of mothers do not want to try it because they believe in myths such as it will lead to cancer of the cervix, or that the baby will get hurt when they decide to be pregnant.

Sometimes it is the men who complain that they are being pricked during intercourse and so they ask their partners to remove the device. The women come to the clinic and between them and us, we decide to say we have taken it out while actually we have not. When they go home, the husbands are happy and they come to us to say “thank us very much. Now I am not being pricked.”

So then you know it is all in the mind.

IPS: Is availability of contraceptives an issue? EM: Yes. Sometimes we get complaints that all the family planning methods are out of stock; they are not available in the government clinics. Since the government supplies us with some of the commodities, when they run out, we are also affected. And then we have to buy to give to our clients.

The government must ensure reliability of the supplies so that women do not miss their family planning options and be at a risk of getting unwanted pregnancies. It is this situation that may lead to unsafe abortions which comprise a third of maternal deaths.