LAGOS, Nigeria, Dec 15 2011 (IPS) - The women of Makoko, a low-lying slum close to the Lagos Lagoon along Nigeria’s Atlantic coast, always sleep with one eye open. Many live in fear that when they go to sleep at night they will wake to flooded homes and business. 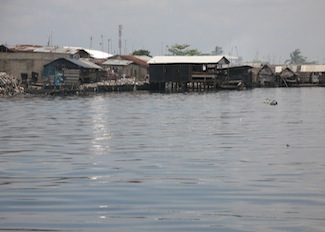 In Ajegunle, a low-lying slum in Lagos, flooding is also disrupting the economic activities of women Credit: Sam Olukoya/IPS

“The other day, I slept and dreamt that a cold breeze was blowing on me. When I woke up I realised that I was actually sleeping in a flooded room,” Dupe Faseun, a single mother of five and self-employed canteen owner, told IPS.

“Flooding is a major problem here, the water takes over everything, even the cooking pots are filled with the dirty water,” Faseun said adding that the frequency of the flooding has increased in recent years. Low-lying urban slums spread across Lagos are suffering from the worst impact of flooding caused by climate change, according to Desmond Majekodunmi, an environmentalist with the Nigerian Conservation Foundation.

The United Nations Human Settlements Programme, UN-HABITAT, lists Lagos as among the major coastal African cities that could be severely affected by the impact of rising sea levels.

Lagos Lagoon, which is connected to the Atlantic Ocean, has seen an increase in water levels following a rise in the ocean’s level.

The Atlantic Ocean has been experiencing the fastest rise in water levels in history because of climate change, according to research published in the Proceedings of the National Academy of Sciences journal.

Rainfall in the region has also increased, according to a recent report by the Nigerian Institute of Social and Economic Research.

“The trend indicates that rainfall has been on the increase. Respondents reported that in the past 10 years in Lagos, there has been a rise in sea levels resulting in flooding in many parts of the state,” the report said. The organisation did not, however, indicate the frequency of flooding.

The Nigerian Meteorological Agency, NIMET, attributes the prolonged and increased rainfall in this region to climate change. Though the consequences of this has been devastating. In July more than 25 people died following torrential rains.

“The water level had risen incredibly and the channels that were meant to discharge water from the roads and drainages are completely blocked because of the high tide and because the Atlantic Ocean and Lagos Lagoon have risen more than usual,” Tunji Bello, Lagos State Commissioner for Environment, said shortly after the incident.

Majekodunmi said that the most disturbing aspect was the threat climate change posed to economic activities in these poor neighbourhoods. He added that Nigerian women were among the worst affected because many had to solely fend for their families.

Faseun, who owns a small food canteen near her house, said the flooding poses the biggest threat to her business because she sometimes spends up to a week waiting for the floodwaters to recede before she resumes work again.

“Nobody wants to come and buy food while the dirty flood water is everywhere.

“I normally get very depressed whenever the flood prevents me from selling food, I will always wonder where I will get money to take care of my children,” she said.

In Ajegunle, another low-lying slum in Lagos, flooding is also disrupting the economic activities of women.

Most of the women here earn a living processing fresh fish, but this is difficult to do when the area is flooded.

“They are unable to work when the places they smoke their fish at are flooded. Because they don’t have access to cold rooms, most times the fish goes bad before the flood water recedes,” Fatai Ojulari, head of the fishermen’s union in Ajegunle, told IPS.

“The women are experiencing hard times and there is no financial assistance from anywhere,” he said.

The government, however, said it is addressing this challenge.

“We have a coastal defense strategy, which involves providing a sea defense wall to secure and protect Lagos from the threat of the Atlantic,” Lagos State Governor Babatunde Fashola told IPS.

Tunde Akingbade, an environmentalist who has attended many climate change conferences said that adaptation funding, like that committed to at the recently concluded 17th Conference of Parties in Durban, South Africa, could ultimately help vulnerable Africans like those living in Makoko and Ajegunle.

“It is, however, important to point out that the level of transparency and good governance in place is crucial to how the funding will meet the needs of the people,” he told IPS.

But until then, there is not much that Faseun and women like her can do about their situation.

“Even though the flooding is getting worse every year, I cannot leave because I don’t have the money to relocate to a better place.”