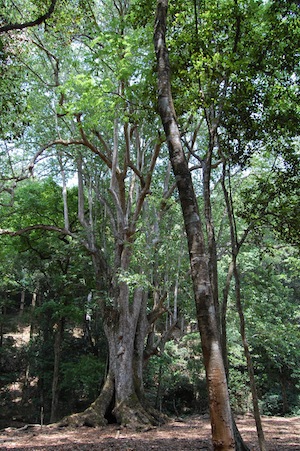 The Chikka Sampige tree is revered by the Soligas tribe in the Billigiri Ranga Temple Tiger Reserve as the sister of the 1000 year old Dodda Sampige tree. Credit: Malini Shankar/IPS

The Indian government, with its impressive dossier of legislation on conservation and biodiversity, is at the forefront of negotiations on sustainable development, but a closer look at the country’s involvement in a largely failed attempt to safeguard the earth’s fragile ecosystems suggests that the entire global model is deeply flawed.

The Rio summit 20 years ago appeared to be a valiant effort to involve stakeholders in environmental conservation, poverty eradication, and climate change mitigation through equitable legal responsibilities.

But concepts like the Green Economy and the Convention on Biodiversity agreed upon in 1992 turned out to a clever disguise for profit making at the expense of the environment.

Anil Agarwal, founder-director of the Indian environmental think tank, Centre for Science and Environment, proclaimed back in 1992 that environmental conservation was interwoven with the development paradigm: only if impoverished people are allowed to harness forest resources for their livelihoods can poverty be banished, he averred. Poverty and profits thus became two sides of the same coin in Rio in 1992, and ‘biodiversity’ was another commodity up for grabs.

India followed up on the first Earth summit by enacting the Biodiversity Act and the Forest Rights Act, which gave forest dwelling ecological refugees and third generation indigenous people the right to harvest forest resources for livelihood purposes and granted the right of residence in forests.

But just over three decades after those promises, 22 tigers were massacred in the premier Sariska Tiger Reserve in India, where impoverished farmers, lacking employment opportunities in forests, avenged the loss of their cattle by conniving with poachers to kill every single tiger in the protected area.

Though tiger reserves have increased in number from 28 to 43 after the Sariska slaughter, “Coexistence (between forest dwellers and wildlife) is a myth and conflict is inevitable,” said Praveen Bhargav of Wildlife First in Bangalore.

“Development is necessary. Resources have to be utilised. But both development and resource utilisation has to be done on a sustainable basis with an eco-friendly model,” said Dr. Suresh Patil, deputy director of the Anthropological Survey of India in Kolkata.

To date, this has not been the case in India.

“The Biodiversity Act (2002) is no more than an emaciated version of the global compact. The Act neither informs nor influences the working of the Forest Act, Forest Conservation Act, Wildlife Protection Act and the Forest Rights Act, legislation that covers over 95 percent of biodiversity in India,” M.K. Ramesh, Professor of Environmental Law at the National Law School of India University in Bangalore told IPS.

National and state level Biodiversity Boards have turned out to be toothless. A case in point was the Biodiversity Board of the state of Karnataka dropping a proposal to notify an island in the Arabian Sea as a sanctuary, despite its rich biodiversity, because the Indian Navy uses the wildlife on this Island for target practise in the name of defence preparedness.

“In short, the lofty ideals (of biodiversity conservation) were lost in translation and the Convention turned out to be an entity sans eyes and sans teeth  – a mere cadaver,” Ramesh lamented.

Now, the same mistakes made in 1992 appear on the brink of being re-enacted. The ‘solutions’ now on the table at Rio involve the same attitude towards biodiversity, conservation and climate change that first put the earth and its natural resources up for sale.

In fact, Ramesh dismissed the concept of carbon credits as no more than “pollution (or) carbon coupons”.

A major question for conservationists is how can poverty rates be reduced if forests, the main source of many people’s livelihoods, are not protected? If forest cover is lost will it not affect monsoons, agriculture, standard of living and food security?

Hurdles to Conservation – WTO and TRIPS

The Indian Biological Diversity Act of 2002 was an attempt to realise the goals of the first Rio Summit in 1992. It provided for a decentralised administrative structure, including a National Biodiversity Authority, state biodiversity boards and biodiversity management committees under the aegis of local self-governments.

Many hoped the Act would benefit grassroots-level conservationists like native medical practitioners in traditional medicine systems like Ayurveda and Unani.

For example, traditional medicines lack western scientific documentation and proof of ownership and are thus vulnerable to being exploited by commercial interests, which are empowered by TRIPS.

For example, Sarpagandhi or Rouwolfia serpertina has been used in the Ayurvedic medical tradition for treatment of hypertension since time immemorial.

When this information became well known among allopathic practitioners, who identified the precise chemical (resperine) responsible for releasing hypertension, the treatment fell prey to commercial manufacture.

Since the Ayurvedic tradition does not rely on a system of documentation and patenting, it was effectively excluded from the financial benefits of commercial production and distribution of an age-old remedy.

The existence of TRIPS has also upset a historical balance that existed in local communities.

For example, scientists from the Tropical Botanical Garden Research Institute of Thiruvanthapuram (TBGRI) were introduced to the energising effects of the plant Trichopus zeylanicus by the Kani tribals who were guiding the scientists through the trek.

Lab tests ‘proved’ the tribals’ knowledge of the plant to be accurate and TBGRI was paid 10 million rupees by a pharmaceutical company for the rights to own and manufacture a drug.

Of that, five million rupees have been earmarked for the Kani tribal community. But thorny questions about who will accept the royalty on behalf of the community - the head of the tribal clan, the Panchayat headman or the eldest villager? – and how the funds will be democratically distributed, have become the subject of much confusion.
Since the year 2000, India’s forest cover has increased by a mere 1.05 percent, bringing India’s total forest cover to 21.05 percent, according to statistics provided by the office of the Director General of the Forest Survey of India, 12.95 percent short of the requisite for the Indian land mass.

Three rivers – the Tunga, Bhadra and Netravati – originate from just one cave in the Kudremukh forests.

Yet, despite all that is known about this wildlife-rich forest, it still took an Indian Supreme Court ruling to close down the Kudremukh Iron Ore Company’s mines in 2005.

Seven years after the ruling, the forest has still not been notified as a tiger reserve despite signs that tiger presence is steadily increasing.

Former employees of the mining company are eager to relocate away from the forest in search of new employment opportunities, creating ideal conditions for designating the Kudremukh National Park as a Tiger Reserve – but political will is seriously lacking.

“Biodiversity loss can be minimised by strictly regulating habitat degradation, fragmentation and loss. Species extinction can be prevented by devising and rigorously implementing species conservation plans including conservation breeding, wherever required,” Dr. V.B. Mathur, dean of the WII, told IPS.

Aquatic habitat in India is also a site of political neglect, with severely depleting fish stocks impacting fisherfolk across the country.

T. V. Ramachandra, limnologist at the Centre for Ecological Sciences at the Indian Institute of Science, told IPS, “Fragmentation of forests in the catchment of aquatic ecosystems, dumping of urban solid wastes, disposal of untreated domestic sewage and industrial effluents contaminate the water bodies.

“These have led to the disappearance of native biodiversity as is evident from disappearance of fish fauna. Streams in the catchment have become seasonal due to drastic land cover changes, fragmentation of forests and invasion of weeds,” he added.

Rio+20 should have been an opportunity for captains of industry to combine the economic growth paradigm with proper urban planning, adequate employment opportunities in rural areas, and protection of biodiversity reserves.

Instead it appears to be “the expensive political circus” that Danish Prime Minister Anders Fogh Rasmussen warned against during the 2002 Johannesburg summit, which also failed to reach binding agreements on environmental protection.

If the current paradigm persists, the human carbon footprint will erase the tiger’s footprint on the forest floors of Indian reserves and elsewhere.