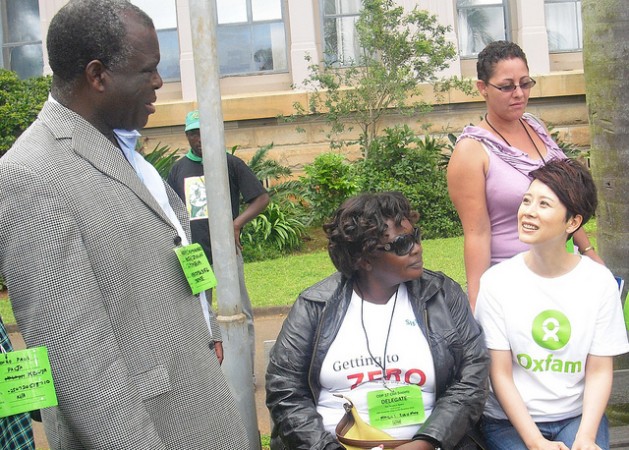 Mailes Zulu, an environmental activist from Zambezi District, Zambia, protested on the sidelines of COP17, demanding that the voices of the poor be heard in issues of climate change and sustainable development. Credit: Ephraim Nsingo/IPS

Jun 22 2012 (IPS) - As social movements blasted the “new green economy” proposed at Rio+20 this week, environmental activists in Zambia worried about the role that poor people, especially those in rural areas, are going to play in it.

On Jun. 20 at least 50,000 people protested in Rio de Janeiro, Brazil against the outlined agreement for the United Nations Conference for Sustainable Development, or Rio+20, which ends Jun. 22.

Protestors said the green economy idea was just a facade, and solved nothing in respect to what matters to workers: decent employment, collective bargaining rights, autonomous organisation, equal wages for men and women and the end of slave labour.

Mailes Zulu, an environmental activist from Zambezi District, in the North Western Province of this southern African nation, is one of those who are not optimistic about the summit.

The Rio+20 conference comes at a time when there is growing investor interest in Zambia, especially in the mining sector. The country is rich in copper and cobalt resources – it is ranked as the world’s seventh-largest producer of copper and the second-largest global producer of cobalt.

Among other things, Zulu is concerned that while the country’s North Western Province is rich in minerals and other natural resources, “communities are never consulted, and in a majority of cases, most of the profits are not even kept in the community.”

She said that there was need to look into the plight of rural communities, which are often relocated to pave the way for the establishment of commercial activities.
“More investment also means increased displacements for rural people. Those are issues that need to be discussed.

Green Living Movement director Emmanuel Mutamba agreed with Zulu and said that ways needed to be found to ensure that people benefit from the natural resources found in their areas. The Green Living Movement is a social development and environment organisation in Zambia.

“There is always going to be demand for land for investment,” said Mutamba. “I think the argument is about the manner in which this is done and the laws thereof. How do the local people come into the equation?”

It is also an issue of concern to the government, as expressed in Zambia’s position paper to Rio+20, presented by Environment Minister Wilbur Simusa on Jun. 14.

“We also know the high impact mining has had in terms of land degradation, water and air pollution and the wellbeing of our mining communities. To ensure a sustainable future for our mining sector and the communities who serve it, government and our mining partners must work together for the wellbeing of all involved with Zambia’s economic engine,” reads part of the message, called “The Zambia We Want”.

In November 2011, Zulu travelled to Durban, South Africa by road with other participants in the Trans African Caravan of Hope, a campaign that aimed to rally Africans around the issues of climate change and climate justice. There she took part in a number of demonstrations on the sidelines of the U.N. Framework Convention on Climate Change in order to try and get the message across.

But seven months later, the message remains to be heard.

“All we want is to be consulted, and have our views listened to,” Zulu said.

Simon Mwamba, the Zambia coordinator of the Eastern and Southern Africa Small Scale Farmers Forum, says the exclusion of the interests of the poor extends to smallholder farmers. He said that small-scale farmers are disadvantaged because they do not have access to processing and markets.

“We should not look at sustainable production as increased production,” Mwamba told IPS.

“When we talk about sustainable development, we need to look at the environmental sustainability, economic sustainability and other social factors. You can put more money to boost production, but while increasing environmental degradation, which will have far-reaching impact on the poor.”

Mary Sakala, a farmer from Mumbwa in Zambia’s Central Province, told IPS that during the last farming seasons she produced more than 400 bags or 20 tonnes of maize, and a sizeable quantity of other crops. But she needed support to find a market for her produce.

“We need support in terms of selling our crops. They (Rio+20 participants) should also give us ideas of how we can improve our yields without destroying the environment,” Sakala told IPS.

Mwamba said that the biggest challenge would be policy shifts that would address smallholder farmers’ lack of access to processing facilities.

“At the moment, farmers just produce but there is no value addition, because most of the products are lost in what I call economic leakages. This is where farmers end up losing more on transportation and other costs, trying to access markets and processing facilities. This will also be a way of creating more employment opportunities at community level,” said Mwamba.