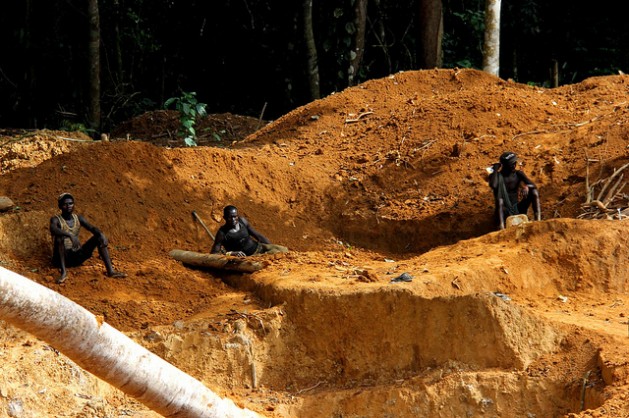 In the forest in Gbarpolu County, northwest Liberia, a group of men work on a surface gold mine unaware of the environmental impact their work has. Credit: Travis Lupick/IPS

MONROVIA, Jun 15 2012 (IPS) - Deep in the forest in Gbarpolu County, northwest Liberia, a group of men working a surface gold mine are asked what will happen to the land when they are finished with it.

They laugh, and shoot each other confused glances.

Gbessay Musa, who says he left Sierra Leone in search of work three years ago, delivers a cheerful response.

“We will leave the place when there is nothing left,” he exclaims. “We will find another site where there is money. The land here, it will just be here.”

Happy for a break from digging under the day’s hot sun, the young men are in good spirits, and more laughter follows. Musa is asked if he cares about the land, or just his gold.

“The people down here, they are getting by,” he answers, not fully understanding the question; his only consideration is for the livelihoods of the men who work with him.

The miners’ indifference is understandable. After 14 years of civil conflict that only ended in 2003, opportunities for education and meaningful employment in Liberia remain limited. The war devastated this West African nation.

A March 2011 World Bank report  states that Liberia’s energy infrastructure was “completely demolished,” that piped water access fell from 15 percent in 1986 to less than three percent in 2008, and that the national road network was left in “a state of severe disrepair.”

To say that the government of Liberia has a number of competing priorities would be an understatement. It could easily share the attitude of the miners in Gbarpolu and forego concerns for the environment amid the rapid development of the country’s natural resources.

Yet ahead of the Rio+20 United Nations Conference for Sustainable Development scheduled for Jun. 20 to 22, the impoverished nation is leading a push out of Africa that calls for economic prosperity and environmental sensitivity, and asks that the two no longer be treated as mutually exclusive.

As executive director of the Liberia Environmental Protection Agency (EPA), it is Anyaa Vohiri’s job to ensure that Liberia’s natural resources are managed in a sustainable manner. The task can be a challenge, she tells IPS.

“You’re looking at immediate needs. So my role at the EPA is to say, ‘Okay, yes, we need all of the economic benefits, but not in a way that shoots our self in the foot,’ ” Vohiri says.

Delivering the plenary address at the Summit for Sustainability in Africa  in Gaborone, Botswana, Sirleaf said that striking a balance between immediate needs and long-term sustainable development is a top priority. She warned that the continent must ensure it does not deplete its natural resources while trying to meet short-term needs. She also stressed that in order to plan and implement a sustainable economic future, policymakers must take the future into account.

“How do we ensure that our watersheds, forests, fisheries and other ecosystems are protected from overuse and degradation because we need one more hospital or one more school?” Sirleaf asked. “Development and conservation can go hand in hand, provided we develop a framework for action around a shared vision.”

At the end of the two-day summit the Gaborone Declaration  was drafted. It states that “urgent, concerted actions be undertaken to restore and sustain the ability of the Earth to support human communities…and thereby contribute to the prosperity of future generations.”

Vohiri says that the Gaborone Declaration will be carried to Rio+20 and defended there.

“What we give the world right now is our biodiversity,” she emphasises. “So if we do not get support for sustainably managing our ecosystem, we are in trouble. The world is in trouble.”

According to data supplied by the EPA, Liberia’s mean annual temperate is projected to rise between two and four degrees Celsius by 2100. An EPA presentation on climate change dated May 2012 lists key climate hazards for Liberia as increases in temperature, changes in rainfall patterns, tropical storms, and rising sea levels and coastal flooding.

An August 2010 United Nations Development Programme report  states that Liberia has already started to experience the effects of climate change, “which include reduced soil moisture, shifts in temperature, erratic rainfall and heat waves.” The document emphasises that 70 percent of Liberia’s labour force is employed in agriculture, and that that sector is the most vulnerable to the impacts of climate change.

“This desk study revealed that the increase in heat intensity and erratic rainfall patterns could be symptoms of climate change which have an adverse effect on crop yields and livestock production beyond the impacts expected,” the document continues.

One of Liberia’s most outspoken advocates for climate change mitigation is Sieane Abdul-Baki, a special assistant to the Minister of Gender and Development. She says that specific attention needs to be given to the disproportionate impact that climate change is expected to have on women and children.

Abdul-Baki says that her hope for Rio+20 is to see strategies for sustainable development incorporate considerations for gender sensitivity. She notes that in developing countries, household tasks such as food production and the procurement of water are largely the responsibilities of women, and those are areas where the effects of climate change can most acutely be felt.

“Women usually make decisions when it comes to what kind of fuel they will use for lighting their homes,” Abdul-Baki says. “So they may be driving deforestation. But when you have them informed about the impacts of climate change, they may be able to change their attitudes. So when it comes to adaptation and mitigation, we have to build women’s capacity.”

Abdul-Baki concedes that at an international summit as big as Rio+20, the priorities of developing countries can be overlooked.

“The smaller countries, we usually align ourselves into groups, or blocs,” she says.

“Because when we put ourselves into groupings, our voices become louder than when we negotiate on an individual basis.”

Abdul-Baki notes that at Rio+20, Liberia will be participating in negotiations and workshops as part of several coalitions, including the Africa Group, the Group of 77 and China, and the Least Developed Countries Group.

Vohiri says that such stakeholders have the opportunity to do development right and in a way that is sustainable. But the support of the rest of the world is needed.