UNITED NATIONS, Jun 13 2012 (IPS) - Unlocking women’s energies and allowing them to become drivers of change could fuel the motor of sustainable development.

The question is whether world leaders meeting at the Rio+20 summit in Brazil will squander or seize this tremendous opportunity to harness women’s full potential. 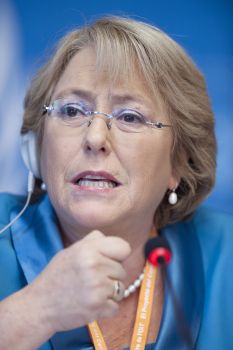 In an interview with U.N. correspondent Isabelle de Grave ahead of Rio+20, Michelle Bachelet, head of U.N. Women, explains the vital link between gender equality and the environmental, social and economic dimensions of sustainable development.

Q: How does gender and women’s empowerment relate to sustainable development?

A: Twenty years ago, at the (first) Rio Summit, there was a unanimous agreement that sustainable development would never be realised without gender equality and that holds true today.

Gender equality and women’s empowerment are integral to the achievement of sustainable development. Gender equality is the factor which brings together the three dimensions. It determines the access that men and women have to productive resources such as land, finance, and technology, it determines the ability of individuals to take advantage of opportunities such as education and employment, and it circumscribes access to social protection and basic services.

Women farmers make up 43 percent of the agricultural labour force in developing countries and 80 percent in some parts of Africa. If women had the same access as men to agricultural resources, production would increase by 20 to 30 percent, and has the potential to reduce the number of hungry people in the world by 12 to 17 percent.

In terms of the everyday lives of women and girls, the provision of basic services, clean water, energy, housing and transportation can reduce the intense labour of women, promote dignity and enhance quality of life.

Rio+20 provides an enormous opportunity to move forward to a new development paradigm, which appreciates the integral human value of gender equality and women’s empowerment to the achievement of sustainable development.

Q: Participation and leadership is one of the key themes of the UN Women mandate. Will women’s participation in discussions held at Rio+20 be a reflection of progress in this regard?

A: We are advocating for women’s leadership and participation because we know that when you do have women discussing things and when you allow women a strong voice, this frees up space for change.

At this year’s summit there will be a high-level forum of women leaders, and a high-level event for women leaders on the subject famine. The participation of a group of female heads of state and heads of government will bring attention to the relationship between gender equality, women’s empowerment and sustainable development. In this regard we are seeing progress.

But it’s not only about participation in one particular conference that is key, it is about women’s’ participation and leadership in diverse areas, and how we are able to link this to an action plan. That action plan will be the outcome document to be agreed upon by member states at the Rio +20 summit.

To ensure women's voices are heard, Bachelet outlined some of the core themes on the UN Women agenda to be raised at the Rio+20 Summit.

"Women have a vital role in environmental management and development, full participation is therefore essential to achieve sustainable development," reads the draft outcome document for Rio+20, symbolic of the progress gender related concerns have made at the global level.

Leaders will be urged to take measures to accelerate women's roles and equal participation in governance at all levels and to ensure leadership in the decision-making process.

Other vital aims include the need for the elimination of all discriminatory barriers to women in urban and rural areas, and concrete action against factors that prevent women from equally accessing, owning or managing productive resources.

Equal access to opportunities, including employment has long formed a part of women's calls for equality and remains a central objective, alongside the urgent need to end gender-based violence.

Last but not least, ideas cannot come to fruition without funding, and Bachelet emphasised "the need to commit to providing the necessary financial resources so that all of these initiatives can be implemented".

Q: Debates and discussions that have taken place ahead of Rio+20 have greatly emphasised the need to streamline the development agenda, by determining the “must haves” that governments will sign up to. In this regard, what challenges do you anticipate for the promotion of gender equality, and women’s rights ahead of the summit?

A: We’ve seen very promising developments in the past few weeks of negotiations, and I’m very pleased that gender equality and women’s empowerment is reflected throughout the text to be agreed upon by member states.

There have been calls from member states to gain greater recognition of women’s rights in relation to water as well as a section on women’s health and sexual and reproductive rights. I hope these will continue and prevail so as to feature alongside women’s right to land and property.

We believe you can’t isolate one part of the world’s female population. You need to include all the aspects that are essential in terms of achieving gender equality, you cannot ensure the right to participate and be an economic agent and not consider sexual and reproductive health to be important as well. We will continue working to ensure that we get out of the document the best and most comprehensive response to women’s needs.

It is also important that after Rio, when governments will be discussing a new development framework beyond 2015 and the MDGs that women are fully integrated.

I would really like to see a comprehensive sustainable development goal on gender empowerment and the inclusion of gender targets and indicators in all other goals. We believe gender equality has to be mainstreamed – taken into consideration in all areas of development – and recognised as a concrete goal in itself.