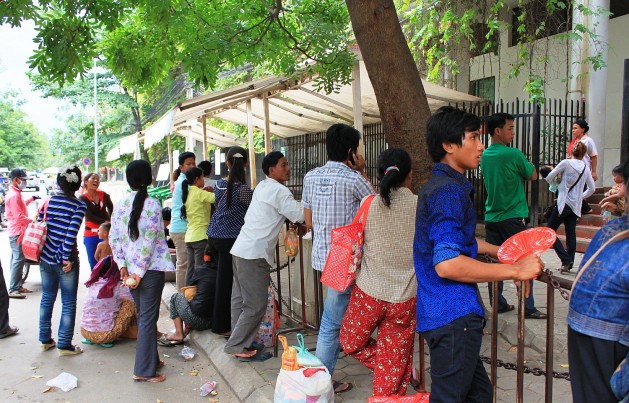 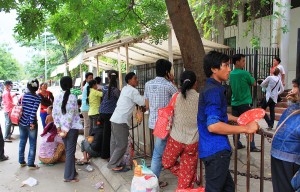 Health experts are blaming high malnutrition levels for an outbreak of hand, foot and mouth disease (HFMD) that has killed more than 54 children in impoverished Cambodia since April.

On Wednesday, Cambodia closed all kindergartens and primary schools to stop spread of the Enterovirus-71 (EV-71) believed responsible for the outbreak of HFMD.  The closure will affect 121,300 pupils in pre-schools and 2.14 million pupils in primary schools, education officials said.

HFMD typically affects infants and children and is spread through contact with the mucus, saliva, or faeces of an infected person and epidemics are known to break out in the region during the rainy season.

Cambodia first began surveillance for the epidemic last week, but lab tests are yet to determine whether the cause is actually the EV-71 virus,  although it was found in most of the children who died.

“We are getting samples (for testing) every day,” Dr. Philippe Buchy, chief of biology at the Pasteur Institute, in Phnom Penh, told IPS. He added that the institute does not receive the complete case record of each patient in order to be able to classify it as ‘mild’ or ‘severe’.

Dr. Sok Touch, director of the Cambodian health ministry’s Communicable Disease Department, said “there were no new severe cases like we saw at Kantha Bopha,” referring to a Swiss-funded hospital in Phnom Penh where the majority of the children died between April and the end of June.

Sok Touch said mild forms of the disease were seen in “several provinces” and there could be hundreds of cases that escaped detection because of the country’s poor public health resources.

Cambodia has no “baseline” for measuring the mortality rate from HFMD because the disease is not on the country’s surveillance list, the health official said.

According to Buchy it is impossible to detect the mortality rate because the severe form “had not been seen here before.” He added that the ratio of deaths to cases was high but it was likely – as in other countries in the region – that the deaths were a small proportion of all cases.

“It’s something we have been expecting for a few years,” he said, adding that the number of cases is probably underreported. His lab had developed the capacity to detect EV-71 about two years ago in response to reports of outbreaks in neighbouring Vietnam.

Sok Touch said it was not until last week that the health ministry began working with the World Health Organisation (WHO) to incorporate surveillance for the severe form of HFMD.

A joint-investigation by the health ministry and the WHO found the EV-71 virus – one of the known causes of HFMD – present in the majority of cases reported.

“It was the first time the virus had been detected in a lab in Cambodia,” said Dr. Nima Asgair, team leader of the WHO’s emerging diseases unit in Cambodia.

Most of the children died within one day of hospitalisation and were   malnourished or suffering from other chronic conditions prior to contracting the disease, the joint investigation found.

According to Joel Conkle, nutrition specialist with the United Nations Chidren’s Fund (UNICEF), “malnutrition affects 40 percent of Cambodian children, which makes them more susceptible to being severely affected by outbreaks of infectious disease.”

The country has the third highest rate of child malnutrition among members of the Association of Southeast Asian Nations, Conkle said, adding that “28 percent of children below five years of age are underweight and 40 percent are too short for their age”.

Hidden hunger, which refers to vitamin or mineral deficiency, was also a concern in Cambodia as more than half of all children under the age of five – the demographic most susceptible to HFMD – are anaemic, primarily due to lack of iron, Conkle said.

“Anaemia is something that affects almost all children in Cambodia; nearly nine out of 10 children in the country are anaemic at one year of age.”

More than 1.27 million cases of mild and severe cases of HFMD have been detected in China in the first six months of this year with 356 deaths, compared to slightly more than 711,300 cases last year, according to the WHO.

It was also reported that the number of cases had tripled in Singapore, from 871 cases last year to more than 26,000 cases in the first six months of this year, but in both countries the numbers had peaked in June and were declining, according to a WHO Jul. 13 update.

Virologists are carrying out molecular studies of the virus to determine if the virus found in Cambodia is a new genotype of EV-71.

Bouchy said it would take another two weeks or so to identify the EV-71 genotype found here, and a few weeks longer to map out its full genome. “At this point it is impossible to know whether the virus detected here is more virulent,” he said.

The emergence of a new, more virulent form would be particularly dangerous in Cambodia where children are vulnerable to infectious diseases due to their poor health, health experts say.

“These children are already not in good shape,” the Pasteur Institute’s Bouchy said. “What we have observed in China and other countries is that the (HFMD) patients were coming from very poor backgrounds,” he added.

Public health experts are taking a two-pronged approach, calling for strengthening of the country’s fragile public health system as well as encouraging enhanced sanitation at households and improving children’s  diets.

“Building the capacity of service providers in public health centres and hospitals is an important component of strengthening and improving the health of children in rural Cambodia,” UNICEF’s Conkle said.

“But there are also simple things that can happen at the household level to improve child health. Hand-washing with soap and feeding young children a better diet could help to make children healthier and less susceptible to outbreaks of infectious diseases,” he added.

About a third of Cambodia’s population of about 15 million people continues to live on less than one dollar a day, which makes improving diets for children a major challenge.