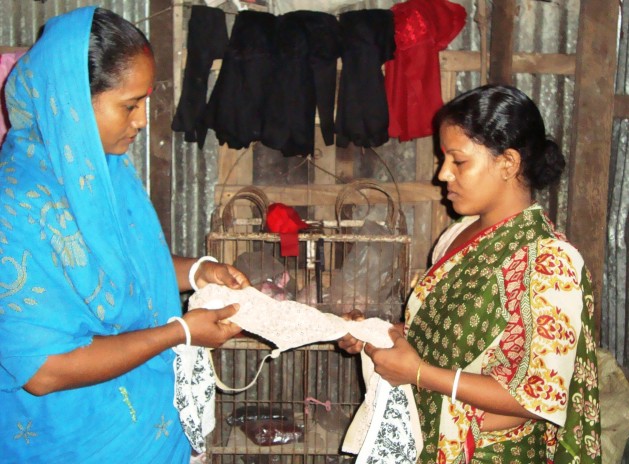 DHAKA, Aug 15 2012 (IPS) - Laboni Vhoumik’s lingerie manufacturing unit in the Gopai village of Noakhali district, about 180 km outside the capital, is a forceful argument in favour of the Grameen Bank microcredit model that fosters female entrepreneurship and also relies on it.

But the Grameen Bank is itself under threat of creeping government control sparking  a storm of protests by entities ranging from women’s rights groups to the state department of the United States.

Vhoumik, 36, started out in 2003 with nothing to commend her except tailoring skills. Today, she runs a production unit which employs 12 women and supplies quality undergarments to several major retailers in Noakhali and the adjacent districts.

“We counsel and offer free training to promote such small entrepreneurships. The idea is to ensure that the borrowed money is properly utilized,” Mohammad Kaiser Alam, NRDS microcredit programme coordinator, told IPS.

Vhoumik now earns about 238 dollars a month, which is considered handsome in her village. She also has large savings and recently paid for some major repairing of her home.

Her group of 65 members discusses social and family problems as well as members’ progress with their business or problems or outstanding loans.

Members rarely default as the group is responsible as guarantor for the loans.

But this simple business model that has worked to lift thousands of Bangladeshi women out of poverty is now under threat because one of its pioneers, the Grameen Bank, is undergoing changes at the helm that will allow greater government control.

The government owns three percent of Grameen Bank, but by suitably changing the ‘Grameen Bank Ordinance’ the new state-appointed chairman will be able to appoint its chief executive officer.

“This represents a de facto imposition of government control of the bank; in other words, the poor women, who are also its owners, are being deprived of their right to manage their own bank and are being made powerless,”  says a statement issued by 60 of Bangladesh’s leading civil society representatives.

“Grameen Bank is unique in the world for being owned by impoverished women. Representatives of the 8.4 million women borrowers sit on the board of the bank and have participated over the years in its decision making, unlike any other bank in the world,” the statement said.

Shireen Huq, one of the signatories to the statement, told IPS “there is no reason to believe that the changes (to Grameen Bank) are being made with good intent.”

Huq, a leading women’s rights activist and founder of the NGO ‘Naripokkho’, said the proposed amendment to the Grameen Bank’s constitution gives the chairman of the board the authority to form a three-member selection committee. “In other words, the majority board members will be in effect disenfranchised.

“The government’s appointment of a person known for his animosity towards Prof. Muhammad Yunus (Grameen Bank’s founder) as the chairman did not bode well for the institution,” Huq told IPS.

A press statement on Aug. 5 by Patrick Ventrell, acting deputy U.S. state department spokesman, said Washington was “deeply concerned about recent actions the government of Bangladesh has taken to give the government-appointed chairman of the Grameen Bank Board control over the selection of the bank’s new managing director.”

“This move would diminish the role the largely female borrower-shareholders play in shaping the direction of an institution that has made a difference to millions of impoverished women in Bangladesh, and indeed around the world,” the statement said.

“We are concerned that the latest actions by the government could threaten the future of the bank which was founded by Nobel peace prize laureate Prof.  Muhammad Yunus,” Ventrell said.

The plan by the government to increase its role in Grameen Bank has sparked a furious debate in Bangladesh that has pitted economists who favour microcredit as a development tool against those who believe that it is not effective enough.

Prof. Abul Barkat, who head the economics department at Dhaka University’s  told IPS that microcredit reaches only small portion of the poor people. “Hardcore poor who need most attention remain out of the reach of such services and who are considered having no potential of repaying loans.”

“Out of Bangaldesh’s 150 million population, 98.9 million are poor, 47 million are middle class and 4.1 million are rich people. Out of the 98.9 million, 50 percent form the hardcore poor and remain in the lower bottom. Microcredit only reaches the upper half of the poor who are the potential target group of the NGOs,” the economist explained.

According to Barkat economically the upper half of the poor (49.4 million) who get microcredit facilities “bounce in their own orbit” and they “neither come out of poverty nor slide down to the hardcore poor group.”

Qazi Kholiquzzaman Ahmad, another noted economist, told IPS that he has rarely seen poor people getting significant benefit from microcredit programmes. “One of my own studies shows only seven percent of the borrowers actually coming out of poverty from microcredit.”

Ahmad, who currently chairs Palli Karma-Sahayak Foundation or PKSF, said his 2008 study showed that fewer than ten percent of the total 23 million borrowers in the country actually came out of poverty. “This means that microcredit programmes are not always sustainable in poverty alleviation.”

But, the PKSF itself was launched by the government in 1990 to build on the success of private players and now has over 250 partner organisations (small NGOs) and has 8.6 million borrowers.

Mohammad Hasan Ali, founder and executive director of Pally Bikash Kendra, an NGO that operates microcredit programmes in the northwestern districts, told IPS that the steady growth in borrowings and repayments showed the robustness of the model.

“Surely the poor are borrowing because they are getting some benefit in one way or another,” Ali said.

What is important, most economists agree, is that the small borrowings made through NGOs have  eliminated traditional village moneylenders who charged usuriously high rates of interest and increased the debt burden of the poor.

The real success of microcredit, economists say, lies in the fact that it integrates other programmes like health and hygiene, education, water and sanitation, social safety, legal aid, human rights and other basic issues with the lending process.

S. M. Ali Aslam, executive director of ADAMS, an NGO operating in the southwestern districts, told IPS, “There is no doubt that the NGOs took the leadership in providing financial security to the poor when the  state failed to offer any secure economic programme.”

Aslam added that that foreign donors continue to support microcredit programmes in Bangladesh “because they work.”