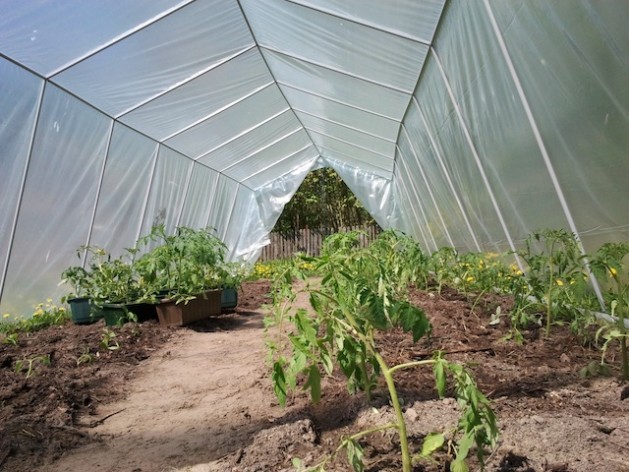 Organic tomatoes thrive in a greenhouse at a farm in southern Poland. Credit: Claudia Ciobanu/IPS

WARSAW, Aug 19 2012 (IPS) - Present day European farming is based on the Common Agricultural Policy (CAP), which was created over six decades ago by countries emerging from severe food shortages that swept the continent during and after the Second World War.

But at a time of widespread famine, lingering droughts, and looming resource wars, experts warn that the logic behind the CAP’s theory of producing huge quantities of food, using largely industrial farming methods, needs reassessment.

For one thing, Europeans are no longer hungry. In fact, they eat twice as much meat as the world average. Over 170 kilogrammes of food per capita are wasted yearly in the European Union, according to the European Environmental Bureau.

Secondly, the kind of industrial farming promoted for decades in the Union comes at a huge cost to the environment: agriculture accounts for one quarter of total water use in Europe; yearly, 100,000 hectares of land are lost to farming because of deterioration; and biodiversity is shrinking at an unprecedented pace.

Finally, support offered by the Union to its farmers to export products at prices well below production costs has played a role in the destruction of livelihoods of small farmers in developing countries.

While such subsidies have been significantly reduced over the years, Europe finds itself today the world’s leading importer and exporter of agri-products. Its imports of animal foodstuff are linked to the promotion of monocultures, deforestation and even land grabbing in developing countries.

Clearly, the model needs to change: for the sake of developing countries, the global climate crisis, and the health and wellbeing of Europeans themselves.

Many Europeans are already aware of the need for such a change. The CAP is currently undergoing structural reforms, that will likely result in a revamped policy after 2014.

Last year the European Commission, the executive body of the EU, put forward a proposal of reform that, while not necessarily addressing all the ills of the CAP – such as its broad focus on increased productivity based on industrial farming or its impact on food sovereignty around the world – nevertheless made determined steps to green farming methods throughout the block.

Over 350 billion euros worth of public money go towards financing EU farms over each seven-year cycle. The Commission proposed that, starting from 2014, 30 percent of direct payments typically made to farmers be conditioned upon the adoption of environmental standards.

It also said that a ceiling of 300,000 euros should be placed on the amount of subsidies each farm can receive.

The Commission further called for crop diversification, asking that farmers plant at least three types of crops on their lands, in an effort to move away from destructive monocultures.

It asked that farmers maintain pastureland permanently, rather than plough it up, which will enable carbon sequestration, biodiversity and water management. And it demanded that seven percent of the land on each farm be kept uncultivated, to allow wildlife to develop freely.

The proposal represents an attempt to restore European farming to more natural practices. For many of the region’s 15 million farmers, the recommendations are not difficult to implement, and numerous small farms thriving across the continent are evidence that such measures are not only practical but also hugely beneficial.

But industrial farmers, interested in using every bit of land for profit-making production, will not let the old farming regime go down without a fight.

The Commission is for the moment trying to hold its ground.

“I know that some farmers are already doing more; we definitely do not want to penalise the champions,” EU Commissioner for Agriculture, Dacian Ciolos, told IPS. “That’s why the Commission is ready to consider a system of equivalency in those member states or regions that have already done a lot in this direction. We are providing this flexibility because it is important we take into account the progress made so far.

“But, beyond this flexibility, the principle stays the same,” added the Commissioner. “The key point with these (green) agricultural practices linked to direct payments is to have a real impact at the European level. And we can only have it if we ask every single farmer in the EU to employ these practices.

“Therefore, these measures cannot be voluntary. We cannot talk about sustainability of agriculture without assuming responsibility for the protection of environment and the management of natural resources,” he stressed.

With roughly one more year to go on CAP negotiations, the Commission is now struggling to ensure that its initial proposals are not weakened too much, while simultaneously gaining the approval of reluctant member states.

At this point, green NGOs that initially gave a tepid welcome to the Commission’s proposal – arguing that it could have gone much further – are now advocates of the reforms, using their grassroots base to push member states to implement the recommendations.

“The Commission’s proposal is an attempt to shift thinking about CAP, to orient it towards the safeguarding of public goods,” Trees Robijns, EU agriculture policy officer at BirdLife, one of the NGOs working on CAP in Brussels, told IPS. “But we will see whether it turns out to be a greening of CAP or rather greenwashing.”

“Beneficiaries of CAP have to understand that this public money is not their god given right, but rather a privilege, which they have to defend and justify,” added Robijns.