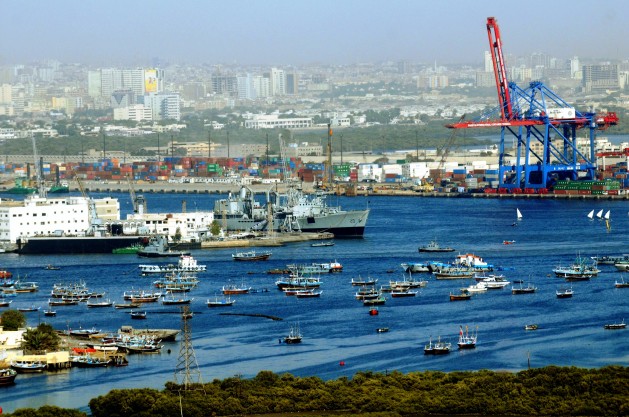 KARACHI, Sep 6 2012 (IPS) - Climate proofing this bustling port city is a daunting task for planners who must consider factors ranging from proneness to flooding and administrative malaise to the fact that 60 percent of its 18 million people live in slums.

The Economist Intelligence Unit in its latest global survey of living conditions released in August rated Karachi as the seventh least liveable city, placing it 134th in the world out of a list of 140 countries.

Farhan Anwar, an engineer and urban planner, argues that the recently notified Climate Change Policy for Pakistan directs attention mostly to agriculture, forestry and water resources and glosses over the special needs of urban settlements.

Anwar, lead author of the report, ‘Karachi city climate change adaptation strategy: A roadmap’, published in April, warns that if urgent action is not taken Karachi may turn into a cauldron of “social and ethnic tensions”.

Anwar believes that climate change preparedness for Karachi starts with an understanding of its political economy, its vulnerable and threatened communities, assets and biodiversity. This would require a detailed and comprehensive mapping of land use and ownership, utilities, transport networks and constructions.

“Unresolved political conflicts and turf battles over control of city assets and services that lead to, among other things, fragmentation and decay in terms of legitimacy, credibility and functional effectiveness of the critical institutions of governance such as city government, land control agencies, civic utilities” are some of the ills that have befallen Karachi, Anwar tells IPS.

Although the city’s management infrastructure is teetering and its over-stretched civic services are at breaking point, Karachi accounts for 95 percent of Pakistan’s foreign trade and contributes to 30 percent of the national industrial production.

Karachi, the report said, is prone to flooding, thanks to overflowing rivers, rainwater and choked sewers. Except for a 12-mile embankment along Malir river, most of the city remains defenceless against inundation.

According to an Asian Development Bank report, ‘Addressing Climate Change and Migration in Asia and the Pacific’, released in March, Karachi is at high risk from sea-level rise, prolonged cyclonic activity, and salt-water intrusion.

In 1977, severe floods occurred in the flood plains of the Malir and Lyari rivers, resulting in 267 deaths with more than 30,000 people made homeless and 100,000 temporarily dislocated, according to Karachi Development Authority records.

Despite the known dangers, no effective policy exists to prevent settlements in the riverbeds and encroachments on drainage channels, and already this is adversely impacting flood prevention and management.

It is not just the poor and vulnerable squatting in flood prone zones and Karachi’s fishing communities that suffer. “Sensitive national installations are exposed to tidal flooding,” Anwar’s report said.

There is no provision to store the flood waters and no effort has been made to promote water conservation, waste-water recycling or rainwater harvesting practices, the report says.

Karachi also has no effective policy in place to deal with disasters and there are critical gaps and shortcomings in emergency response systems such as trauma facilities, fire services, law and order, evacuation plans and facilities.

Anwar says city planners and managers must have a “focused plan” within the context of a ‘climate change adaptation strategy’ that can act as a planning framework.

“However,” he tells IPS, “in the long run, climate change related policies and plans” would have to be embedded within the internal working of relevant institutions to give sustainability to the process.

Part of the problem why this sprawling urban metropolis has such poor governance is because of highly decentralised administration when it comes to control over land and provision of services.

Karachi’s squatters not only live on land they do not own but also steal water from the mainline through suction pumps run on power tapped illegally while the city police looks the other way.

At the upper end of the social strata, the affluent of Karachi have found a way around collapsing urban infrastructure by paying extra for water, electricity and security.

“In order to borrow from the Asian Development Bank, our city planners build, neglect and rebuild,” said Arif Pervaiz, a Karachi-based environmental specialist who has worked extensively on climate change. “They try to fix management problems through brick and mortar solutions.”

“For example, to address traffic congestion,” said Pervaiz, “flyovers and underpasses are built, but what is not considered is the broader traffic management issue.”

“I think one major unified authority that coordinates the running of the city is imperative,” said Pervaiz, who finds Anwar’s report a timely reminder to policy makers of the urgent need to implement climate change adaptation plans.

“It’s frustrating. Residents of Karachi do not know which government department to approach for redressal of civic problems in their area,” he said. “Sometimes, even officials in a particular department do not know where its jurisdiction begins and ends.”

“I am also not sure about the usability and benefit of the report unless the city government’s institutions and other stakeholders are consulted,” commented Sheikh who heads Leadership for Environment and Development, a prominent non-government organisation in Pakistan.