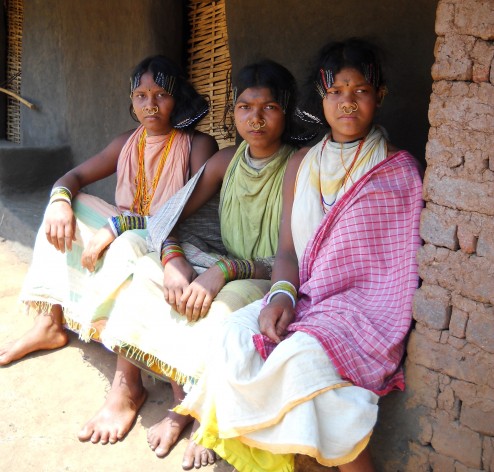 RAYAGADA, India , Sep 18 2012 (IPS) - The deafening din of the lunch gong is sweet music to the 200-odd tribal girls rushing down the stairway, clutching stainless steel plates and tumblers.

Sikhsya Niketan (House of Education) in Chattikona administrative block of Rayagada district is a residential school meant exclusively for girls of the Dongria Kondh tribe in eastern Odisha state. The school is part of the federal government’s intensified efforts to take universal education to extremely marginalised groups in India.

Odisha’s 62 tribal communities make up 22 percent of the total population and account for 50 percent of people living below the poverty line in the state. They are partly responsible for Odisha’s low human development indicators as compared to other Indian states.

The Dongria Kondhs, who number about 8,000, live in 120 villages located at an altitude of 5,000 feet above the sea level on the Niyamgiri hill plateau, coveted by mining companies for its valuable mineral deposits.

Till date, only two Dongria Kondh girls have managed to complete school. The first, Kasturi Melaka, did so as recently as in 2010.

Literacy among the Dongria Kondh is less than 10 percent, with female literacy at just three percent. This is when the national tribal literacy stands at 47 percent and Odisha’s general literacy close to the national level of 74 percent.

Rina Wadaka, 14, one of the 28 girls from Khambesi village is in class five. Inspired by Kasturi Melaka, she wants to be a teacher, and that is considered progress because Dongria Kondh girls are rarely interested in jobs and careers.

This exclusive primary school, which started in 2008 with 123 students, has grown to have 225 girls aged 6 – 16 years. “Every year, around 20 girls take admission, while 15 drop out,” Simadri Trinath Row, special officer with the Dongria Kondh Development Authority (DKDA), which manages the school, tells IPS.

Primary school dropout rates in Odisha’s tribal communities is 6.4 percent – more than twice the state dropout rate of 2.8 percent,  according to the government’s ‘Annual Plan 2011-12’.

“Lessons are taught in the similar Kondh dialect, which many Dongria students cannot follow. Dongria girls with better language skills help translate the lessons into Kuvi,” Jayanti Sabar, a teacher at the school, told IPS.

Though government regulations specify that Kuvi-speaking Dongria Kondh teachers be hired, “it is difficult to find a qualified one,” says Row.

According to Sabar, the students score a poor 30 – 40 percent marks in examinations, but teachers try to be lenient while marking answer sheets. Last year, 16 girls passed class five with support from two male tutors who come in to support the female staff.

Getting Dongria Kondh girls to join the school is not easy. DKDA employs multi-purpose workers (MPW) as motivators. “Weekly markets, when the Dongria Kondh people descend to buy and sell farm products, are the best time to catch them,” says Gola Sikkaka, an MPW in Khambesi village.

The community relies on witch doctors and knows little about modern medicine. “I tell parents that their daughters will know about medicines to cure brain malaria and tuberculosis (the witch doctor’s remedies don’t work for these) if they go to school,” Sikkaka tells IPS.

The sex ratio among Dongria Kondhs is 1,352 females per 1,000 males against the state average of 978 females for 1000 males. Girls are highly valued in economic terms, as they gather forest products and help with household chores, and command a bride price on marriage.

Given such tangible benefits sending a girl to school becomes irrelevant. “Parents often ask MPWs questions such as who will do the farming? What if, after being schooled,  they decide to marry outside the tribe?” Suryanarayan Patra of Khajuri village an MPW, told IPS.

“Dongria Kondh culture and tradition cannot go parallel with development objectives,” Row told IPS. “The older girls who have been in the school for some years now see their traditional costume as fancy dress,” he added.

“On the other hand, when they return to their hilltop homes during festivals, sowing and harvest periods, they are reluctant to come back to the school. Accustomed to roaming free, they find it suffocating to stay within the four walls of a classroom,” says teacher Srimati Nundruka.

Female teachers residing in the school must stay constantly alert to stop the girls from running away. “Sometimes, younger girls get homesick and try to quietly slip away home, but we get them back,” Nundruka tells IPS.

“We are caught in a cleft stick,” says Row. “The school cannot deny the girls home trips because they might otherwise leave school altogether – yet we don’t want them to lose lessons by staying away from classes for too long.”

The government is doing its bit to keep Dongria Kondh girls in school. With grants-in-aid of three million rupees (54,000 dollars) yearly, they are given two dollars as monthly stipend for regular classroom attendance, while most other costs including medical expenses and school uniforms are borne by the government.

Government schemes to encourage tribal girls to attend school include providing them with bicycles to commute and fixed bank deposits of 54 dollars that become accessible on entering secondary school.

The efforts are yielding results. According to the annual Odisha Economic Survey 2010-11, the dropout rate at the primary school level for tribal girls has steadily declined from 66 percent in 2000 to six percent in 2010.

India’s planners are keen to attain the United Nations Millennium Development Goal- two that seeks to ensure that children everywhere are able to complete a full course of primary education by 2015.

India’s net enrolment ratio in primary education has already crossed the 95 percent mark making the 2015 goal within reach. Getting Dongria girls into classrooms is among last mile efforts.