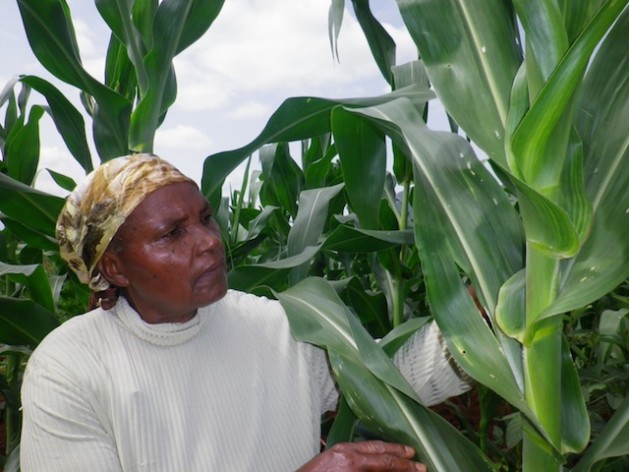 Beatrice Mueni Mutisya inspects her maize crops grown in semi-arid Eastern Kenya. Studies have shown that men and women farming together can lift millions of people out of hunger. Credit: Isaiah Esipisu/IPS

NAIROBI, Sep 1 2012 (IPS) - Three years ago, the residents of the semi-arid Yatta district in Kenya’s Eastern Province lived on food aid due to dwindling crops of maize that could not thrive because of the decreased rainfall in the area.

That was until a local bishop, trying to find ways to prevent mothers from forcing their teenage daughters into prostitution, changed everything.

Now, on a Saturday evening in the district’s village of Makutano, Stephen Mwangangi, his wife, Margaret, and their two children pick bullet chilli peppers meant for export to Europe.

The family is one of about 2,000 households that are part of a project called Operation Mwolio Out – Mwolio means food aid in the local Kamba language.

The project began after Bishop Titus Masika from the local Christian Mission Impact ministries saw a story on local television that showed women from the area forcing their teenage daughters to peddle sex for food or money.

“I was disturbed by the story. It prompted me to convene a meeting of all the agricultural and marketing experts born in Yatta who I could reach – most of them were working elsewhere in the country. We sat with the residents of Yatta to identify the main cause of the problem, and find the solution,” Masika told IPS.

What the residents needed was sustainable employment that would lift them out of poverty.

“By implementing advice from the experts and using the traditional knowledge from the residents, we have now successfully eradicated Mwolio. But this was not going to be possible without the involvement of all family members at all stages,” Masika said.

Local farmers were introduced to different farming techniques, which include the use of zai pits (pits of manure on top of which plants are grown), irrigation using rainwater stored in water pans (small earth dams), and the planting of drought-tolerant crops.

Through seminars, training workshops and field days spent at local villages, Masika and other agricultural experts from Yatta managed to convince men to join the project. The men provided the hard labour to help dig the water pans, but they also helped women access farm equipment generally owned by men.

Now farmers in Yatta grow their high-value crops, including the bullet chilli peppers, and jointly package and export them to Europe. Farmers are paid depending on the amount of produce they contribute.

Masika said that the success of the project was thanks to the involvement of entire households and not just women seeking ways to support their families. “When we started this project three years ago, we only had 60 women participants,” Masika said.

Now, if people want to join the project, they can only do so if all their family members join as well.

“Working together as groups of families, when men became involved, has worked miracles over the past two years. As families, we usually reason together, identify prevailing challenges, and strategise how to tackle them as a team,” said Masika.

And scientists from the Swedish International Agricultural Network Initiative say that in Sub-Saharan Africa, men and women working together for a common goal increases productivity.

A book soon to be published by the initiative, titled “Transforming gender relations in agriculture in Sub-Saharan Africa: Promising approaches”, highlights innovative methodologies in small-scale farming that have improved gender relations. The book states that cooperation between the genders contributes to increased food production, food security and nutrition, stronger value chains, and better use of natural resources.

“This means that we have to improve women’s positions in communities so they have equal access to land, to tools and supplies (like fertiliser), to learning opportunities, and to markets,” one of the authors of the book, Marion S. Davis of the Stockholm Environment Institute, told IPS.

One of the case studies in the book is of coffee farming in Uganda, where men and women directly competed with each other, but in the process ended up producing lower-quality coffee.

“But after a gender-focused project came in and encouraged men and women to collaborate, they were able to work together to produce higher-quality, higher-value coffee that they sold together, benefiting the whole family,” said Davis.

Transformation involves more than just focusing on women’s needs and empowerment, according to the findings of the book.

“It also depends a great deal on men and women working together at all levels. This is true particularly in the case of adapting technologies and integrating into market value chains,” Dr. Cathy Farnworth, an international expert on gender issues and one of the authors, told IPS.

She said the findings showed that promoting methodologies that encouraged cooperation between women and men farmers resulted in increased productivity dividends when they shared resources and maximised the efficiency of their decision-making.

“Right now women do not have access to the tools and supplies they need. So if you even the playing field and give women the same access to supplies and tools as men, they’re going to be able to produce a lot more,” Farnworth said.

Her co-author, a senior researcher at the Stockholm Environment Institute, Melinda Fones Sundell, told IPS that while women have a key role in agricultural production, in many cases they do not have correlated roles in making production and marketing decisions.

“They are efficient producers with what they have, but usually produce less than male farmers because of their limited access to land, credit and other production inputs,” said Sundell.

Janice Wanyama, a housewife from Bungoma County in Western Kenya, is a case in point.

“I have just a small plot within our compound where I grow vegetables that feed the entire family throughout the year. But the commercial part of the land, the tractor used for preparing the land and other major farm equipments are controlled by my husband. But still, I have to find time to labour on the commercial land as well,” she told IPS.

This is despite the fact that women in Sub-Saharan Africa have the highest average agricultural labour force participation in the world.

She said that where women lacked the right to own land, children also suffered.

“A report by the Organisation for Economic Co-operation and Development indicates that countries in which women lack any rights to own land have on average 60 percent more malnourished children,” said Sundell.

But a report by the Food and Agriculture Organization of the United Nations titled “Closing the Gender Gap in Agriculture” shows that closing the gap between the genders in agricultural inputs alone can lift 100 to 150 million people out of hunger.

And the community in Yatta district is proof of this. “On average, my family earns 250 dollars, the equivalent to 20,000 shillings every two weeks. This is far better than many employed people in Nairobi,” Mwangangi told IPS.