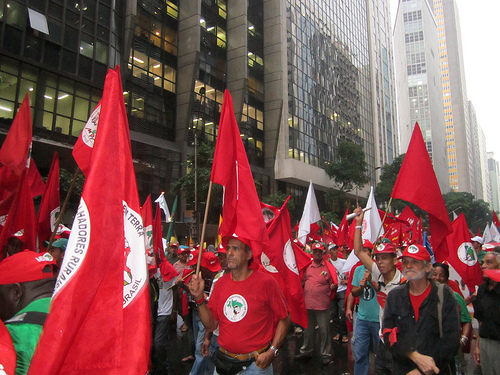 WASHINGTON, Sep 14 2012 (IPS) - Academics gathered in Washington on Wednesday suggested that the mixed experience at the U.N. Conference on Sustainable Development, held in Rio de Janeiro in June, has increased the importance of citizen engagement and consumer accountability in issues of environment, renewable energy and sustainability.

At a panel discussion, participants explored why there had been such a lack of progress after the June conference, known as Rio+20, one of the largest international summits on the issue in decades.

Particular emphasis was also paid to the fact that the private sector, particularly large-scale corporations, was being allowed to make sustainability-related promises and voluntary commitments without being held accountable for those pledges.

“The one commodity that politicians care about are people, and if people care the politicians will follow,” Michelle Lapinski, the director of corporate practices at the Nature Conservancy, an advocacy group, said Wednesday. “People should mobilise, demand a change and ask what’s happening about the future of sustainable development.”

Lapinski believes not only that consumers can alter the behaviour of companies, but that companies that cave in to consumer pressure will ultimately lead by example, setting trends for other companies to follow.

An example of corporations doing their part for the environment is PUMA, which published an environment-focused profit-and-loss report every quarter. The group as a whole agreed with Lapinski’s analysis, calling attention to Chevron, whose entire public relations campaign revolves around sustainable development and renewable energy.

Twenty years ago, the participants pointed out, this would have been unimaginable.

As with government, citizen pressure holds great potential over corporations.

“If people go on a particular website and saw that Coca-Cola promised A, B and C, and haven’t delivered, that’s a very good basis for campaigns, for boycotts,” Reid Detchon, the vice-president for energy and climate at the United Nations Foundation, said. “They have to believe someone is watching – you have to hold (corporations’) feet to the fire.”

This concept of monitoring progress is why Jacob Scherr, the director of strategy and advocacy at the Natural Resources Defense Council, a research and watchdog group, is optimistic about the future, even after realising the lukewarm success of the Rio summit.

Scherr’s project, cloudofcommitments.com, is specifically designed to use social media to get the youth involved, to get their voices heard, and to make sure that they hold big corporations, business leaders and politicians accountable.

“The politicians didn’t feel pressured to act at the Rio summit,” Scherr said. “The people didn’t make them feel the pressure, but there were lots of young people who wanted to be heard. There were young business leaders with sustainable development plans and economic plans that need to be put out there and shared.”

Social media may hold out promise in this regard, particularly as a way to promote activism among the youth. Pop bands such as Linkin Park have also pledged support for sustainable development initiatives, with the power to mobilise tens of millions of followers into action.

Participants at Wednesday’s discussion also pointed to the new collaboration between the World Bank and the United Nations, which are co-chairing a new joint committee on sustainable development.

Still, many suggest, the issue will come down to citizen participation and consumer responsibility, initiatives hold out the promise of force a change in corporate culture, at least over time.

“Let’s face it. Our reality is we’ve been buying and selling nature for years – corporations do it, and now individuals do it,” Lapinski said, suggesting that the only real change that can be introduced on how corporations view their profits – the nature of how the transaction takes place.

If Coca-Cola uses water, she says, it needs to take the dual responsibility of giving back to nature and making a profit.

All of the participants emphasised that there will be no miracle solutions to the issue of sustainability.

But Scherr warns that the world doesn’t have another two or three decades to wake up and realise that the depletion of natural resources, waste dumping, and deforestation have almost killed the planet.