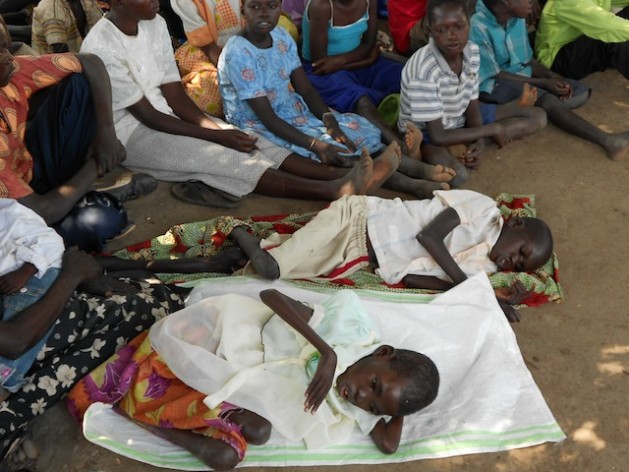 Children with the mysterious nodding syndrome usually suffer from epilepsy, contious nodding and also from malnutrition as their seizures are triggered by food. Courtesy: Gladys Laker/Kitgum NGO Forum

KAMPALA, Sep 20 2012 (IPS) - On a wet earth littered with fresh fruit from a large mango tree in Tumangu village in northern Uganda, Betty Olana (42) sits on a papyrus mat watching over four emaciated children infected by the mysterious nodding syndrome that leaves victims mentally challenged and nodding repeatedly when they see food or cold water.

One of them is her daughter, Joyce Laram (15), who sits with her mouth agape, and saliva running down her chin. The sick children rarely speak and even when the do, they utter unintelligible words only understood by their parents.

“It is mostly at night, when the moon is up that she gets delirious. She hardly gets sleep at night. She cries out suddenly and we have to tie her up. She is now saying: ‘I am seeing ghosts. The ghosts are there. I am seeing them with my eyes. Please protect me,’” Olana told IPS of her daughter who was completely normal until the age of 10.

Victims of the unexplained neurological condition experience numerous symptoms, including continuous nodding, mental retardation, epilepsy, rashes and trembling hands. Many of the infected also suffer from malnutrition as their seizures are triggered by food.

“At the beginning, she started nodding. She has been on medication (for epilepsy) for a long time. The medical people say it is epilepsy, but I do not think so. I think this child, like the rest in this village, is haunted by the spirits of the dead,” Olana said.

Health experts say that the disease is non-communicable. But scientists remain in the dark about the fatal disease that has no known cure, and which first appeared in Tanzania in the 1960s. The Ugandan government estimates that as of January, 200 children have died from the disease.

The children have to be watched constantly as some have fallen into fires and rivers, while wild animals have eaten others. Some parents tie their children to trees or lock them up when they go to farm or to the market. But many have been abandoned.

Now, parents and relief workers in northern Uganda, where nodding syndrome is prevalent, are angry that the government is not doing enough to combat the disease.

The region has been left devastated by the country’s war with the rebel Lord’s Resistance Army (LRA), headed by Joseph Kony. It was one of Africa’s longest-running conflicts, which began in 1978 and has since moved to neighbouring South Sudan and the Democratic Republic of the Congo.

The LRA has been accused of human rights abuses, including the abduction of 20,000 children, the murder of almost 100,000 civilians, mutilation, slavery, torture and rape.

Nodding syndrome, which mostly affects children aged three to 18, was first officially reported in Kitgum district in northern Uganda in 2008.

But it has now spread to four other neighbouring districts. The independent charity group Kitgum NGO Forum, which first announced the outbreak of the disease in the area, estimates that as many as 5,000 children are infected, but government health officials say there are only 3,200.

In the village of Tumangu, which lies on a plain dotted with thorny shrubs, mango trees and cassava gardens, virtually every home has a child with nodding syndrome.

Some parents in Tumangu, torn between dividing their time working on their smallholder farms and caring for their children, have set up a communal network where people take turns watching over groups of infected children.

It has become increasingly necessary, as there have been reported cases of sexual abuse against young girls with nodding syndrome.

Gladys Laker, who heads Kitgum NGO Forum, said that although the government moved in late last year to contain the spread of the disease, “the attention to nodding syndrome has now gone down and we are seeing girl victims being raped.”

“We have data from a recent report indicating that the sick girls have been sexually abused and made pregnant. Men take advantage of the condition these children are in to rape them,” Laker told IPS.

“Although these children are sick, those who have not been completely overtaken by the symptoms of the disease are encouraged to go to school. That is when these men waylay them. Their parents cannot keep watch over them all the time, and when they go to their smallholder farms, some of these children are sexually abused,” she said.

It has left William Owacha concerned about the future for his 17-year-old daughter, Susan.

“This is serious,” he said referring to the incidents of rape. “The government should move in quickly because there is neglect.”

“I am worried because she has no future. Susan is now useless. She cannot communicate properly, she has no appetite and gazes into space all the time and all of a sudden, she falls down. She is not a normal person. The situation here is alarming because our children are increasingly getting infected. Here in Lameiti village (in northern Uganda), we parents are weeping,” Owacha said.

But the director general of Uganda’s Health Services, Dr. Jane Achen, told IPS that the number of rape cases were minimal.

“We have heard of a few cases. It is not widespread and this should not cause alarm because it will be handled,” she said.

Achen said that the Ministry of Health also set up four regional reception centres for patients and plans to build rehabilitation facilities to care for those children who are mentally challenged.

“The infections have not gone up and the number is about 3,200. We have done all that is possible to contain the spread of the disease and handle the victims. As a result, people have become aware of the disease and report any suspected case to the authorities,” she said.

Yeko Lupa, who heads the government’s Nodding Syndrome Task Force for Kitgum, told IPS that there were efforts to protect the sick children.

“Parents leave these children at home and these drunkards take advantage of them and rape them. I know three of these girls who were sexually abused and became pregnant and two have already delivered,” Lupa said.

“We are trying to address this problem – sensitising people not to take advantage of these children. It is not easy because we cannot trace these men. These girls cannot remember who (raped) them because they have a very poor memory,” he said.

Meanwhile, it appears that there is evidence of a link between nodding syndrome and river blindness. River blindness is an eye and skin disease spread by an infected blackfly. Experts from the World Health Organization (WHO) and the United States Center for Diseases Control carried out tests on samples from the victims, after a request from the Ugandan government for assistance last year.

Dr. Joachim Saweka, WHO’s head in Uganda, told IPS that although the results of the tests are not conclusive, there is evidence of a link between the two diseases. River blindness has been rampant for years in Northern Uganda in areas along riverbanks.

“Ninety-three percent of the nodding disease cases occur in the river bank areas where river blindness is common. We have cases that show a strong link between this disease and river blindness but we have not established the neurological link. Investigations are still going on,” Saweka said.