Qatar, a major oil-producing country, is hosting the latest round of UN climate talks, where the world’s countries will need to negotiate measurable targets to keep global warming under control. 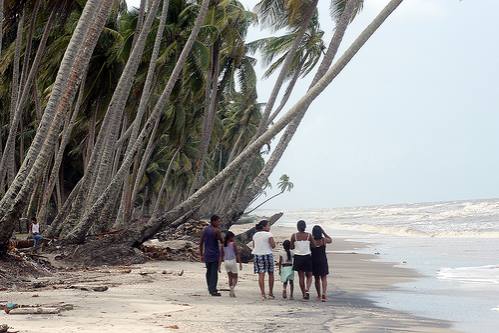 A family walks along the beach in the North Atlantic Autonomous Region, in northeastern Nicaragua. Credit: Germán Miranda/IPS

DOHA, Nov 26 2012 (IPS) - The upcoming United Nations climate talks may have a renewed sense of urgency with a new World Bank report warning that the planet is on a dangerous path to four degrees Celsius of global warming by 2100.

“Turn Down the Heat: Why a 4ºC Warmer World Must be Avoided”, released on Nov. 19, was prepared for the World Bank by the Potsdam Institute for Climate Impact Research and Climate Analytics.

But the 18th meeting of the Conference of the Parties to the United Nations Framework Convention on Climate Change (COP 18) that begins Nov. 26 in Doha, Qatar has become extremely complex.

There is agreement amongst the 194 nations that are parties to the Convention on the need to set a target for reducing greenhouse gas emissions, mainly from burning fossil fuels, to keep the increase in global temperatures below two degrees, to avoid catastrophic climate change.

That target is easy enough to understand, but exactly how this can be achieved has been the subject of intense and complex negotiations for many years, said Jennifer Morgan, director of the Climate and Energy Program of the World Resources Institute, a Washington-based NGO.

Last year at COP 17 in Durban it took extra days of negotiations for countries to finally agree to launch a new round of negotiations to create a legally binding international agreement.

That agreement will require carbon emission reductions for all nations by 2015 to meet the two-degree target. It is intended to be ratified and enter into force by 2020.

“No one knows what this new agreement will look like,” Morgan told Tierramérica in a press conference. “Are countries going to show up in Doha with the will to create a solid work plan?”

2015 is only three years off. The 1997 Kyoto Protocol, which requires some industrialized countries to reduce their emissions, was negotiated in less than three years. However, it took another eight years to be ratified by enough countries to enter into force, and some key nations like the United States backed out of the Protocol.

One of the major issues in Doha will be “ambition”, said Morgan. Ambition refers to how big the emission cuts that nations are prepared to agree to will be.

Climate science clearly shows that to stay below two degrees of warming, global greenhouse gas emissions must begin to decline by 2020.

To do this, industrialized nations must trim their emissions output by 25 to 40 percent below their 1990 emission levels.

“We hope the U.S. will bring a new strategy, including greater ambition, to Doha,” said Morgan.

Most countries’ current reduction pledges are nowhere near what is needed, said Bill Hare, director of Climate Analytics, a non-profit climate science advisory group based in Berlin.

Countries have to find ways to trim another 9 to 11 billion tons of CO2 by 2020 or forget two degrees Celsius, Hare told Tierramérica.

This “emissions gap” between the reductions pledged and those needed to keep the climate under control is growing larger, based on new data to be released this week by the United Nations Environment Programme (UNEP) and Hare’s group.

“The gap keeps getting bigger… making it ever more difficult and costly to stay below two degrees,” said Hare.

Deforestation is the second largest source of climate-heating carbon emissions after fossil fuels.

To provide a financial incentive for developing countries to reduce deforestation, a controversial programme called REDD+ (Reducing Emissions from Deforestation and Forest Degradation) is also being negotiated at COP 18.

Forests are far more valuable than places to store carbon, according to the first comprehensive scientific assessment of REDD+ and potential impacts on biodiversity and local peoples’ livelihoods.

Conserving biodiversity and sustaining livelihoods are essential if REDD+ is going to work, says the new study, “Understanding Relationships Between Biodiversity, Carbon, Forests and People: The Key to Achieving REDD+ Objectives. A Global Assessment Report”.

Coordinated by the world’s largest network of forest scientists, the International Union of Forest Research Organisations (IUFRO), the report will be formally presented during the meeting in Doha.

Those goods and services include cleaning water, preventing flooding, and providing food and habitat for humans and many other creatures like bees that perform valuable services like pollination.

Deforestation currently gobbles up an area the size of Greece (13 million hectares) every year, and is driven mostly by conversion to agriculture and by the wood products industries. REDD+ is an attempt to reverse this by creating a financial value for the carbon stored in forests.

Trees take heat-trapping carbon out of the atmosphere as they grow and store it for as long as the trees live. Instead of cutting down trees and selling the wood, the carbon trapped in the living trees can be sold as “carbon credits” on an open market.

A steel, cement, or coal-fired power company in the United States or a European country can then buy those credits instead of reducing its carbon emissions. The current price is around 10 dollars per ton, but this fluctuates.

Like any market, the carbon market demands verification of how much carbon is in a forest and how much carbon will remain there over 40, 60 or 80 years. This is both very technical and very expensive to do.

Purchasers of carbon credits also want contractual agreements with forest owners to guarantee the carbon stays in the forest, which may prevent local people from using the forest to grow food, fix a roof or even hunt for generations.

While REDD+ could protect forests and be an annual revenue source for local people, doing it right is very complex and there is much work left to do, said Parrotta. “It is hard to see how there will be much progress at Doha.”