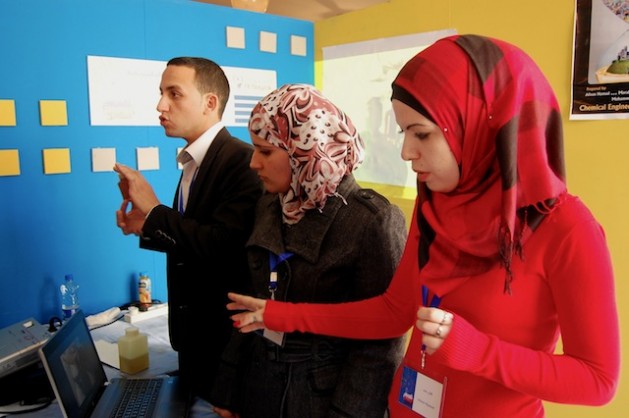 RAMALLAH, Occupied West Bank, Dec 16 2012 (IPS) - Afnan Hamad stands proudly in front of a booth at the Ramallah Cultural Palace exhibition hall, three plastic bottles filled with discoloured liquid on the table in front of her.

“We designed a device to convert plastic waste into gasoline, kerosene and diesel fuel,” explains the 23-year-old chemical engineering graduate from An-Najah National University in Nablus, pointing to one of the bottles. “We hope to see a real factory built, and be the first supplier of alternative fuel in Palestine.”

Hamad and her colleagues – Marah Jamous, Mohammad Manasrah and Rahal Rashed – displayed their machine to convert waste into reusable fuel as part of the ‘Made in Palestine 2012’ fair held last week in Ramallah, an annual event that aims to promote skills and innovations that often get buried beneath the hardships of daily life in Occupied Palestine.

While it started off as a miniature experiment, Hamad’s machine can now hold ten kilogrammes of plastic waste and produce nine litres of fuel, she explained, adding that the invention was designed to address economic and environmental problems prevalent in the area.

“Using our device, we can get rid of a huge amount of waste, which is difficult to do in Palestine,” she told IPS. “Also since we don’t have petrol here, we can produce fuel at a lower cost. One litre of fuel will cost five shekels (about 1.30 dollars).”

Now in its seventh year, the ‘Made in Palestine’ event was co-sponsored by the local Palestinian organisation Al Nayzak and the Swedish NGO Diakonia. Two exhibitions were held, one in Ramallah and one in the Gaza Strip, showcasing over 20 innovations in the fields of engineering, IT, biology and other sciences.

“It doesn’t only tackle science, innovation and technology; (the event) also addresses the idea of business entrepreneurship. We aim to create scientific entrepreneurs who are able to make and found businesses on those innovations that they’ve thought about and put into action,” explained Maha Thaher, international relations officer at Al Nayzak.

With offices in Gaza, Jerusalem and Ramallah, Al Nayzak aims to build a more vibrant scientific culture in Palestine, and encourage critical thinking and science education among Palestinian youth.

“We don’t want students to just avoid these subjects (until) they disappear from our community,” Thaher told IPS, adding that Palestinian students are endowed with a range of talents, which deserve to be nurtured, rather than ignored, by the education system.

“This is the one thing that occupation fails to seize and severely damage: we can (always) count on our minds, our intellect and our people,” she added.

Other innovations on display in Ramallah included a multi-tasking robot equipped with special wheels that allow it to move from left to right without turning, a cell phone application that helps users reserve library books in advance, and an onion planting machine.

Planting onion bulbs can be a tricky exercise, but this machine “plants the bulbs in exactly the right way”, explained inventor and local farmer Ibrahim Da’abes, who owns 100 dunams (nine square kilometres) of farmland in the Jordan Valley area of the West Bank and believes his machine will cut farming costs in half.

“The cost is much lower than employing workers to do it by hand. Bigger farmers would need this machine,” he told IPS.

Called ‘Healthy Gate’, the application asks users for various inputs – including current and ideal weight, age and food preferences – and sets alarms to alert them when, and what, they should eat throughout the day.

“Because of the difficulty of going to the gym, we make it easy for people to be their ideal weight,” said Saffarini, who is in her last year at the Palestine Technical University in Tulkarm, a city in the western West Bank.

Many of the participants of the ‘Made in Palestine’ fair were women. This, according to Thaher, highlights a growing acceptance within the Palestinian community of science education as a legitimate pursuit.

Families have generally been sceptical of the idea of their daughters pursuing dreams of making an important scientific invention or discovery, since this strays so far from the traditional path women are expected to walk.

“At times we had to go door-to-door and talk to parents about how they should let their daughters be involved in such programmes and build on their ideas,” Thaher said.

“But once the parents see their children so involved in this system that cares for their scientific approaches, they start to think differently themselves.”

According to Hamad, “Our families are very proud and so are we. We invented something new for Palestine.”