MEXICO CITY, Feb 8 2013 (IPS) - In a megacity like the Mexican capital, plagued by air pollution and traffic jams, carsharing and carpooling initiatives offer obvious advantages in addition to the economic benefits enjoyed by users. 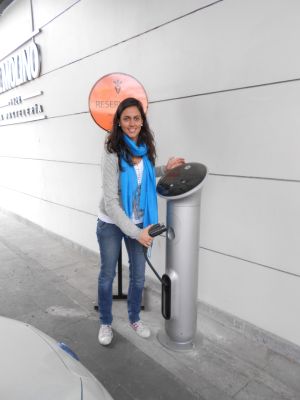 Two of the most popular new initiatives of this kind are Aventones and Carrot, small companies founded by young recent university graduates.

Aventones takes its name from “aventón”, the Spanish word for hitching a lift. The company’s creation was spurred by “the excess of traffic and the inefficient use of cars,” in the Mexican capital, said Ignacio Cordero, a 28-year-old industrial engineer and graduate of the Universidad Iberoamericana (UIA), a Jesuit university in Mexico City.

“The idea is to promote a culture of shared car use,” he told IPS, which in this case is achieved through carpooling.

Cordero joined forces with Cristina Palacios, a business administration graduate from UIA, and Alberto Padilla, an industrial engineer trained at the Monterrey Institute of Technology, to create the company in 2010.

Their services are offered to “communities of trust” – companies, universities and government institutions – with an average of 200 or 250 people, who are matched up through an online system that searches for compatible routes, travel times and empty seats in cars. The service’s users not only share a vehicle – they also share the ride together.

The client organisation is charged a fee of 8,000 dollars a year, which includes training courses.

The software used was created by the company’s founders. It is currently utilised by 5,752 users and 27 clients – 23 in Mexico and four in Chile, where the company began operating in January.

Carpooling has become well established in countries like Germany, Spain, Canada and the United States, but is just beginning to catch on in Latin America. Similar services are being developed in Argentina, Chile and Brazil.

Carsharing is another means of multi-user car transport, popular in Germany, Spain, Canada and the United States and now offered by Carrot in Mexico, Zazcar in Brazil and SigoCar in Costa Rica.

“There is a growing trend of providing more options for getting around. This has a significant positive impact on the environment and fosters multi-modal transportation,” said industrial engineer Jimena Pardo, 28, a UIA graduate, who co-founded Carrot in 2012 with Diego Solórzano, a graduate in actuarial science from the Autonomous Technological Institute of Mexico.

The company, which is affiliated with the international CarSharing Association, offers its clients 40 vehicles, including three electric cars, and has already attracted 1,600 users.

Clients register through a website and pay a fee in accordance with how frequently they need the use of a car, Pardo told IPS. Occasional users pay around 23 dollars annually and seven dollars an hour, plus 23 cents of a dollar for each kilometre travelled.

A frequent driver pays around eight dollars a month, five dollars an hour, and 23 cents per kilometre. Users can pick up a car at one station and leave it at another when they are finished.

According to Carrot, each one of its shared vehicles keeps 20 private cars off the roads.

These new means of transportation are one of the most visible forms of “collaborative consumption”, a movement aimed at increasing the use and shelf life of consumer goods and resources by promoting their use by numerous different people, reducing the time that they sit unused but continue to generate expenses.

These solutions are more than welcome in a city like the Mexican capital and its metropolitan area, which have a combined population of 20.4 million. According to the Centre for Sustainable Transport, the inhabitants of this megacity carry out a total of 49 million trips daily, 53 percent on public transport and 17 percent in private vehicles.

The Transportation Sustainability Research Center at the University of California, Berkeley estimated that as of October 2012, carsharing was operating in 27 countries and five continents, with an estimated 1,788,000 members sharing over 43,550 vehicles, and was planned in seven additional countries worldwide.

The “Propuesta de sistema de vehículos compartidos basado en un sistema de información geográfica” (Proposal for a carsharing system based on a geographic information system), co-authored in 2011 by Luis Guadarrama, Daniel Santiesteban and Javier García at the Autonomous University of the State of Mexico, states that “the expected benefits of a carsharing system include a reduction in the use of individual vehicles and the number of these vehicles in circulation.”

“Our goal is for carsharing to become a habit, and for our service to be a social experience in every way,” said Cordero.

Aventones states that it has prevented the emission of 115 tons of carbon dioxide and saved 750,015 kilometres and 10,586 hours in car travel and 71,430 litres of gasoline.

Carsharing systems “can be replicated in medium-sized and large cities that have urban transportation, a high population density and a mix of residential and office areas,” said Pardo, whose company employs nine people and operates stations in the largest Mexico City neighbourhoods.

Both initiatives are self-financed and have ambitious plans for the future.

Aventones, which employs a staff of 10, hopes to begin operations this year in Bogotá and attract 25,000 new users, thanks to financing provided by its new partner, Venture Institute. Its software team is developing an open application based on social networks like Facebook and Twitter.

Carrot, which has also partnered up with Venture Institute, plans to begin operations in Toluca and Puebla, cities near the Mexican capital, raise its membership to between 3,000 and 5,000 users, expand its fleet to 100 vehicles, and open up more stations in different neighbourhoods of the city.

Both organisations also hope to forge closer ties with the leftist local government of Mexico City, which is promoting the Metrobús (a bus rapid transit system using dedicated lanes), a public bike sharing system, and an electric taxi programme in the city’s historic centre.