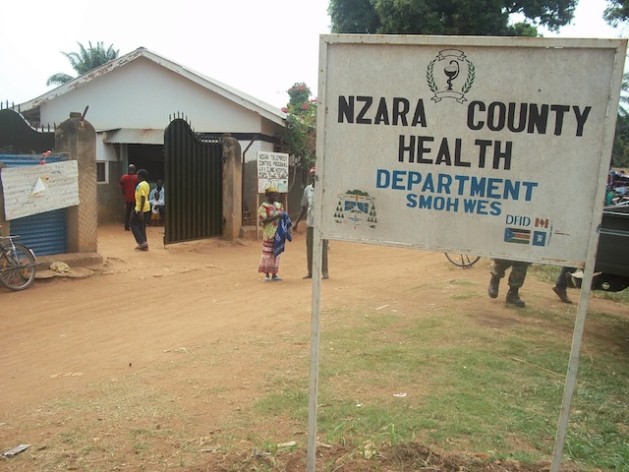 The Comboni missionary-run hospital in Nzara, South Sudan provides counselling to former abductees of the Lord’s Resistance Army who were traumatised by the war and provides antiretrovirals for those living with HIV/AIDS. Credit: Raymond Baguma/IPS

NZARA, South Sudan, Mar 19 2013 (IPS) - Sungu Mizele, a Congolese national living in Yambio, in South Sudan’s Western Equatoria state, earns a living selling the fruit and vegetables that she grows in her backyard, at the local town market. On average, she earns nine dollars a day. But on a good day, when she has fresh supplies, she can earn up to 31 dollars.

She may not have much, but as someone who once lived in the Makpandu settlement camp, which houses some 5,700 refugees, she is at least able to support herself and her late sister’s six children.

Her family’s story is like that of the thousands of others in the camp – they were attacked by Joseph Kony’s rebel Lord’s Resistance Army (LRA), which has spent the last two decades reportedly fighting for a biblical state in Uganda, and has been accused of recruiting child soldiers, killing, maiming and taking sex slaves.

The rebel group, which originally operated from Uganda and now operates mostly from the Central African Republic (CAR) and Democratic Republic of Congo (DRC), attacked Mizele’s home in Dungu, in northeastern DRC, in November 2010.

Mizele and her six nieces and nephews were released, unharmed, by the rebels a day later. However, her elder sister, the mother of the children, was shot dead as she struggled to flee from an LRA commander who tried to rape her.

While living at the camp with the other refugees, Mizele was determined to give her family a better life. She kept aside some of the food and cooking oil rations given to them by relief agencies and resold them. She also scavenged in the bushes near the settlement camp for firewood to sell. Eventually, she was able to earn enough to rent, for six dollars a month, a grass-thatched hut in Yambio, some 44 kilometres from the camp.

“I moved out of the camp and came to town where I started a small business for survival and to support the kids,” Mizele tells IPS.

The family is one of the many who are trying to pick up the pieces of their lives as attacks by the LRA on South Sudan have decreased over the last few years. From the DRC and CAR, the LRA reportedly carried out attacks in South Sudan’s Western Equatoria state, especially around harvest time.

In Nzara, a frontier outpost in Western Equatoria state, families have returned home to cultivate maize, pineapples, sorghum and peanuts. At local trading centres, business is brisk. Groceries and local pubs, which sell items imported from Uganda, are open till late, powered by solar or diesel generators.

Life here has been more peaceful of late. The LRA Crisis Tracker Report, released on Feb. 5 by the United States non-governmental organisations Invisible Children and Resolve, shows that out of the 275 attacks carried out by the LRA in 2012, none were carried out in South Sudan, while 225 occurred in DRC and the remainder took place in CAR.

Many here believe the drop in attacks was largely due to the Uganda People’s Defence Force (UPDF) opening a base in Nzara in 2010.

“We are glad that Uganda came. Without them, we would not have planted our crops and harvested,” Reverend Samuel Enosa Peni, of the Episcopal Church of Sudan, tells IPS.

In addition to the Ugandan military presence here, the Regional Task Force (RTF), which was created last September by the African Union, has been tasked with hunting down the LRA leaders in the region. The RTF is comprised of troops from South Sudan, DRC, CAR and Uganda, with the latter contributing 2,000 troops that are supported by 100 U.S. military advisers.

Peni, who is also the bishop of the Nzara diocese, which oversees 33 parish churches, says that the local community is still grappling with the traumatic effects of the conflict and the church is counselling them.

“We were born in war, grew up in war, and rehabilitation needs to be done,” Peni says. “People have no hope for the future and our job as the church is to reach out to them. Many have died, but those of us who are alive need to forget the past and go forward.”

Former abductees often require psychological counselling before they are integrated back into the community. Many of them are traumatised by the rejection they face upon returning home, he says.

Raphael Reba lives with the fact that her family may never accept her and her son, whose father is one of the LRA rebels who abducted her seven years ago from her home in Gangura Payam, which lies southeast of Yambio.

She was forced to become part of the LRA and was handed over to a rebel commander, who she only calls David, whose child she later conceived.

In 2010, she and David escaped from LRA captivity with their child. He returned to Uganda after surrendering, and she and her son came to her home in South Sudan.

Today, Reba lives in her brother’s house with her now four-year-old son. She cultivates other people’s gardens for a living.

Still traumatised by the atrocities she was forced to commit, including being ordered, during an attack in Aba in DRC’s Orientale Province, to kill and drink the blood of two babies, Reba says she is being ostracised by her own family. Even her father, Thomas Yepeta, cannot accept her or her son.

“If it (the insulting) continues, I will walk to the UPDF camp in Nzara so that they can take me to the father of my child,” Reba tells IPS.

She has undergone counselling from different NGOs here, but is worried that even though her son is innocent and undeserving of the anger directed at him, he will be forced to endure it as he grows up.

At St. Daniel Comboni Primary School in Nzara, missionaries look after formerly abducted children. The administrator, Sister Maria Teresa Carrasco, tell IPS that about 200 of the school’s pupils are ex-abductees brought to them by the Ugandan military, and that many are still traumatised by what they were forced to do while in captivity.

At the centre, formerly abducted mothers infected with HIV/AIDS during LRA captivity come here with their babies for psychosocial counselling and antiretroviral therapy.

“But we have challenges with antiretrovirals because Juba provides the drugs and they don’t arrive in time. We don’t have enough supplies of drugs,” Carrasco says.

Elia Richard Box, the Nzara County Commissioner, tells IPS that until Kony is caught, they will continue to live in fear of a resurgence of violence. “We feel the continued presence of Kony in the bush will not bring peace. Our fear is that the LRA is in DRC and could one day return.”