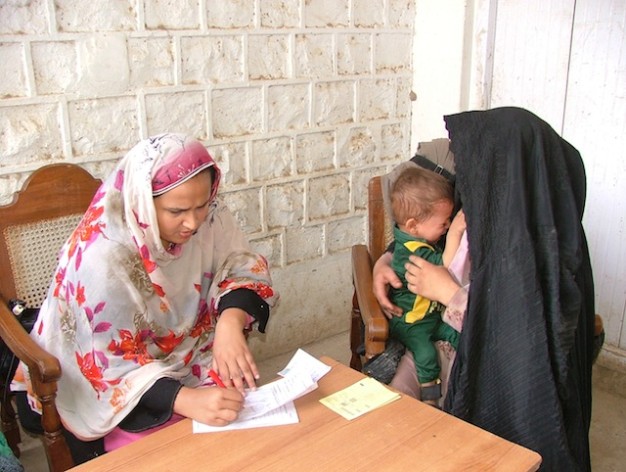 Every year, thousands of Afghan women cross the border into Pakistan in search of medical treatment. Credit: Ashfaq Yusufzai/IPS

PESHAWAR, Pakistan, Jun 3 2013 (IPS) - Muzaffar Shah, a shopkeeper from Kabul, sits in a hospital waiting room, desperate for news. He has travelled nearly 300 km to get to the Khyber Teaching Hospital in Peshawar, capital of northern Pakistan’s Khyber Pakhtunkhwa (KP) province, where his wife is now in intensive care.

Just a few days ago, she delivered a baby boy who died within minutes. Shortly after, she started to experience severe vaginal bleeding.

“She was initially admitted to the Indira Gandhi Children’s Hospital in Kabul, where there was only an occasional supply of electricity and where a lack of water badly hampered patients’ treatment,” Shah told IPS.

“After two days my wife showed no signs of improvement so we rushed her here.”

Now his wife is receiving three pints of blood daily and her chances of survival have increased, but she is not yet fully recovered, most likely because she did not receive immediate medical attention during the birth process.

According to Dr. Muhammad Shaukat, a representative of the Khyber Pakhtunkhwa Health Directorate, doctors in the KP province are more than used to receiving desperate patients from across the border, particularly those seeking emergency obstetric care.

“Three teaching hospitals in this border town receive at least 1,000 Afghan patients every month, mostly those suffering from maternal and childhood diseases, from cities like Kabul and provinces like Jalalabad, Kunar and others, due to a lack of specialised medical facilities there,” he told IPS.

Most hospitals in Afghanistan are rudimentary and understaffed, while a shortage of life-saving drugs has fuelled the health crisis.

Afghan patients now occupy 10 percent of the beds in Peshawar’s hospitals. “They are becoming a burden…but we cannot deny them admission, so we treat them on humanitarian grounds,” Shaukat added.

Last year, teaching hospitals in the northern province treated approximately 34,888 Afghan patients. This year the number is likely to increase, with 20,000 Afghans having already received treatment as of May 20.

“This year, we have already hospitalised about 3,000 patients,” the HMC specialist said, adding the influx will not slow down any time soon.

In comparison, the maternal mortality rate in the United States is seven deaths per 100,000 births, he said.

The infant mortality rate in Afghanistan is also a reflection of the near total lack of infrastructure, services and trained professionals like midwives and female nurses: over 152 infants die per 1,000 live births, since only eight percent of all deliveries are handled by skilled birth attendants. In Pakistan, trained attendants handle 35 percent of births.

Some experts blame the abysmal health situation on political instability.

Ahmed Jamal, a doctor from the eastern Afghan city of Jalalabad, told IPS that ever since U.S. troops deposed the Taliban government in 2001, the country has been almost entirely reliant on international funding for its health needs, with 70 percent of the population relying on health facilities set up by aid agencies like the WHO, the United Nations Children’s Fund (UNICEF) and the International Committee of the Red Cross (ICRC).

Since 2002 Afghanistan has received about 60 billion dollars in aid, much of which has gone towards improving basic infrastructure like schools and hospitals. But despite generous foreign donations, nearly 40 percent of the country’s 25 million people do not have access to health facilities.

Some sources estimate that the decade since the U.S. invasion has seen the child mortality rate drop by 50 percent. But 20 percent of newborns continue to suffer from low birth weight and acute malnutrition.

The WHO says Kabul, a city of 3.2 million people, has an estimated 1.28 hospital beds per 1,000 people, while other provinces have even fewer, with roughly two beds for every 10,000 people.

The few hospitals that exist often lack electricity and running water, and equipment is poorly maintained. As a result, the limited facilities are under-utilised, with an average occupancy rate of less than 50 percent.

Although the northwestern provinces of Pakistan provide an attractive option for well-heeled Afghans, not everyone can avail themselves of the services just across the border.

Aziz Ahmed, an automobile dealer in Kabul whose ailing father is now recovering in a private Peshawar hospital after an operation to remove a kidney stone, says that while he managed to scrape together the money to come here, “most of my countrymen cannot.”

In addition to hospital fees, anyone wishing to cross the border in search of medical treatment must pay about 200 dollars to rent a vehicle, and endure numerous checkpoints before entering Peshawar on rough and bumpy roads that doctors have described as “hazardous” to those already in precarious medical situations.

He said many people in Afghanistan blame the situation on 35 years of conflict, which has caused massive brain drain from the country, leaving the population without access to specialised services.

Dr. Abdul Shakoor at the Institute of Radiotherapy and Nuclear Medicines in Peshawar tells IPS that 15 percent of cancer patients treated in Pakistan come from Afghanistan, which does not have a single cancer treatment centre.

“Last year, we provided treatment to 3,000 patients from Afghanistan,” he said. This year, the KP provincial government registered 189 Afghan nationals for a free cancer treatment programme.

Afghans living with HIV/AIDS also receive free treatment at an antiretroviral therapy centre in Peshawar, which has “been providing treatment and counselling facilities to 250 patients from different parts of Afghanistan,” Dr Akhtar Nabi, a staff member at the centre, told IPS, adding that the centre also treats 600 Pakistanis.

The situation has bred resentment among communities in the northern provinces, which also host two of three million Afghan refugees currently living in Pakistan. Most locals look down on refugees, especially on those with whom they are forced to share the country’s limited medical resources.