There is no single solution for black sigatoka, the most destructive and costly of banana diseases. 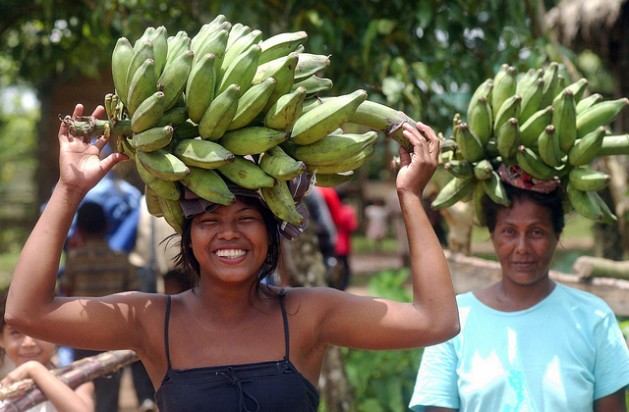 ROME, Jul 14 2013 (IPS) - FAO is currently supporting two seemingly contradictory projects in Caribbean countries: while one seeks to promote organic production, the other involves the use of chemical fungicides to fight black sigatoka, the worst enemy of this key food crop.

The project aimed at assisting organic banana growers is being carried out by FAO (the United Nations Food and Agriculture Organization) in the Dominican Republic, “because the country is a small producer on a global scale, and is thus well-suited to meeting the highly specialised demands of this market,” said Kaison Chang, an economist, trade specialist, and secretary of the FAO Intergovernmental Group on Bananas and Tropical Fruits.

“As small producers, the Dominicans cannot compete with the big producers, like the Ecuadorians, whose production costs per unit are considerably lower,” Chang told Tierramérica*.

This is why banana farmers in the Dominican Republic need to increase their yields and improve their crop management techniques, in order to maximise their comparative advantages.

As part of the project, FAO distributed some 900,000 protective sheets to around 780 banana farmers in the Dominican Republic.

The sheets are placed around the banana bunches while they are maturing, and can help reduce the number of bananas unsuitable for export by 40 to 50 percent.

The Dominican Republic exports almost all of its organic banana production to Europe, and especially Germany. In 2012, organic banana sales totalled 300,000 tons.

The share of organic bananas within the country’s total banana exports rose from 32 to 58 percent between 1999 and 2007.

Bananas are the world’s most exported fresh fruit, both in volume and value. They are primarily exported from developing countries to industrialised countries, which account for almost 90 percent of imports.

Bananas are an essential source of income and employment for hundreds of thousands of households in Latin America, the Caribbean, Southeast Asia and West Africa, according to the World Banana Forum.

However, agrochemical-intensive production on large-scale plantations, distortions along the value chain and declining producer prices have given rise to environmental and social challenges. Meeting these challenges requires the involvement of all stakeholders in the banana sector worldwide, which is what led to the creation of the Forum.

One of these environmental challenges is the disease known as black sigatoka.

In June, FAO organised an intensive training workshop for technicians from Dominica, St. Lucia, Grenada and St. Vincent and the Grenadines aimed at “promoting the effective use of fungicides to control and eradicate” the disease.

Black sigatoka is caused by a fungus (Mycosphaerella fijiensis Morelet) and considered the most devastating of banana diseases. It is harmful to most species and varieties of bananas and plantains. It attacks the plant’s leaves, affecting photosynthesis and thereby reducing yields.

“Black sigatoka causes losses of up to 57 in the weight of the fruit and provokes premature ripening,” said Humberto Gómez, a specialist in technical innovation to boost productivity and competitiveness at the Inter-American Institute for Cooperation on Agriculture (IICA) in Trinidad and Tobago.

The disease was first recorded in 1963 in Fiji, where a similar fungal disease, yellow sigatoka, was initially detected in 1912. In Central America, it appeared in 1972 in Honduras, and subsequently spread to other countries. According to FAO, banana and plantain exports from St. Vincent and the Grenadines and Guyana have fallen by 90 to 100 percent as a result of black sigatoka.

Gómez described the current situation in the Caribbean as “disastrous”. “It is an emergency,” he told Tierramérica.

To confront the black sigatoka outbreak, the technicians attending the FAO workshop “were trained to assess the disease’s reaction to specific ingredients of fungicides, in order to develop more effective treatment plans,” he added.

He recognised, however, that the use of fungicides is counterproductive, because the fungus is highly adaptable and can build up resistance to the combination of available fungicide chemical products. Moreover, the Caribbean’s high humidity and rainfall provide an ideal breeding ground for the disease.

A successful campaign against black sigatoka requires continuous monitoring of soil moisture, better irrigation and drainage, improving plant nutrition through the use of fertilisers, reducing the density of plantations by spacing trees farther apart, and quick removal of affected leaves, according to technical specialists.

“But for now, conventional banana producers in the Caribbean are satisfied with their models of production, using chemicals,” said Chang, who did not take part in the workshop.

“Organic production is very demanding and makes it impossible to use the majority of chemical products traditionally used to control diseases,” he added. “As a result, the costs of organic banana production are very high, which reduces profits for the plantations.”

Another method, proposed by Gilberto Manzo-Sánchez, a professor and researcher at the University of Colima, Mexico, involves the development of natural products from microorganisms that can be used as a preventive measure by boosting resistance to the disease.

“This way we could reduce the use of fungicides, saving up to 50 percent of their cost while helping to protect the environment,” Manzo-Sánchez told Tierramérica.