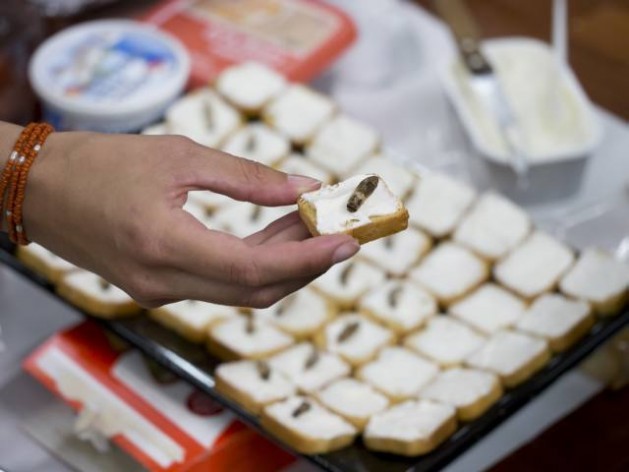 MÁLAGA, Spain, Jul 2 2013 (IPS) - A 280-square-metre warehouse in Coín, a municipality in the southern Spanish province of Málaga, is home to a unique type of farm, where insects are raised for human consumption and the production of animal feed. But despite FAO’s endorsement of insects as food, there are numerous obstacles holding back the development of this industry.

“We dehydrate the crickets and grasshoppers, then turn them into a flour that conserves almost all of their protein and other nutritional properties, which can be added to biscuits, cereal or energy bars,” explained Laetitia Giroud, a French national and the director of sales and product development at Insagri, the company that runs the farm.

Quality control systems have been established for each type of insect raised at the farm in Coín. Thousands of black soldier fly and mealworm larvae are bred for the production of feed for reptiles, fish and cattle, while the grasshoppers and crickets are processed for human consumption.

“Mealworms can also be dehydrated and used to make chips with a bit of salt added, and make an excellent snack,” Giroud told Tierramérica.

Insagri, which will begin to sell its products in August, has already found buyers for its insect flour for use in restaurants in the United Kingdom, France and Belgium, where interest has also been expressed by companies that specialise in the production of tomato sauce and other food products.

These three countries and the Netherlands are the only countries in Europe where there are regulations in place for the “sale of insects for human consumption,” explained Eduardo Galante, president of the Entomological Society of Spain and director of the Ibero-American Centre for Biodiversity at the University of Alicante, in southeast Spain.

In Spain, where Insagri is aiming at the cattle feed and dog and cat food markets, there is “a legal vacuum that permits the eating of insects in restaurants (which buy them from foreign suppliers) but not their sale for consumption,” Galante told Tierramérica.

These obstacles run counter to the recommendations from the United Nations Food and Agriculture Organization (FAO) regarding the consumption of insects and their byproducts as a means of fighting world hunger.

A FAO report released on May 13, “Edible Insects: Future Prospects for Food and Feed Security”, notes that insects are a “highly nutritious and healthy food source” due to their “high fat, protein, vitamin, fibre and mineral content.”

According to Giroud, in addition to the lack of appropriate regulation, there is a “cultural barrier” that acts as a deterrent to the human consumption of insects in Spain, unlike some countries in Latin America, Africa and Asia where it is a common practice.

“Eating insects is disgusting,” proclaimed Marisa, a resident of Málaga and mother of an eight-year-old daughter. She added, however, that the idea of eating them after they have been processed and turned into flour was “interesting”, because “at least that way you wouldn’t see them.”

FAO estimates that insects form part of the traditional diet of at least two billion people around the world, and that there are more than 1,900 edible species. The most commonly eaten include beetles, caterpillars, bees and wasps, ants, grasshoppers, crickets and locusts.

Southern Spain offers the “ideal weather conditions for raising insects, which need temperatures between 28 and 35 degrees,” said Giroud, who stressed that raising insects for food and feed is “cheaper and more environmentally friendly” than raising livestock, since they require less land and water and can be fed more sustainably.

“To obtain a kilogram of protein from cattle you need 13 kilograms of vegetation, while the same amount of protein can be obtained from grasshoppers with just 1.5 kilograms of feed,” she stressed.

In addition, she emphasised that Insagri is “the only company in Europe that uses organic feed for its insects.” For example, its mealworms are fed with organic flour supplied by a nearby producer.

Giroud also noted that eating insects is healthier “because they pose a much lower risk of transmitting diseases to humans,” which she attributes to the fact that they are cold-blooded and not hot-blooded like cows or pigs.

The concept of large-scale insect farming for food for humans is relatively new, although there are examples offered by cricket farms in Laos, Thailand and Viet Nam, notes the FAO report, which has sparked conflicting opinions in Spain.

“FAO’s proposal to fight world hunger by eating insects does not address the root of the problem,” said Esther Vivas, a researcher specialising in food and agricultural policies who insists that the solution “is not to find new inputs but rather to deal with the causes of hunger.”

Vivas, a journalist, sociologist and member of the Centre for the Study of Social Movements at Pompeu Fabra University in Barcelona, told Tierramérica that “food must be made more accessible to the world’s population, because there is enough food produced to feed everyone.”

According to figures from FAO, while there are currently seven million people in the world, there is enough food produced every day to feed 12 billion.

Nevertheless, the UN agency notes in its report that overfishing, climate change and water shortages could have profound implications for food production for the nine billion people expected to live on the planet in 2050.

“It is precisely in these times of crisis, when responsible consumption and protecting the environment are needed more than ever, that it is easier to break down cultural barriers around the consumption of insects,” said Giroud, who launched her insect farm with Julien Foucher, another French national, for an initial investment of 24,000 euro (31,494 dollars); 5,000 euro (6,561 dollars) of this start-up capital was contributed by the non-profit Valle del Guadalhorce Rural Development Group, which is supported by the European Agricultural Fund for Rural Development (EAFRD).

“They are the best alternative for carrying out a change in diet,” added Giroud.

Galante, for his part, pointed out, “We eat crustaceans, and insects are related to them. We eat shrimp and lobster, which are similar to grasshoppers, as well as mussels, octopus and shrimp.”

The Spanish entomologist, who is also a professor in the zoology department at the University of Alicante, added that there are insects that have been part of our daily lives for years, although we are often not aware of it. This is the case, for example, with the cochineal, an insect used to produce the natural, deep-red dye known as carmine. It is commonly used in a wide range of food products as well as cosmetics, particularly lipstick, and is sometimes labelled as E120.

Galante said that he has eaten “all kinds of insects, some of which were very delicious,” although he recognises the aversion provoked by the idea in most European cultures.

He does not believe that the use of insects as a food source will help to end world hunger, but he does consider it “a way of opening up new markets.”