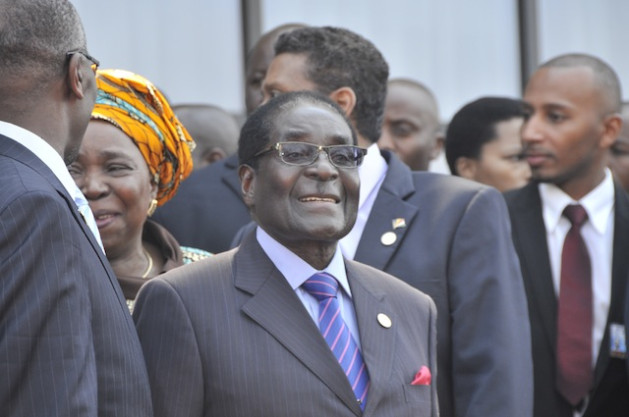 Zimbabwean President Robert Mugabe will be inaugurated for another five-year term as president. He is pictured here at the SADC heads of state summit in Malawi on Aug. 17 where he was given a standing ovation. Credit: Kervin Victor/IPS

HARARE, Aug 22 2013 (IPS) - Robert Mugabe will be inaugurated on Thursday, Aug. 22, to serve yet another five-year term as Zimbabwe’s president after holding the post for the last 33 years. And he does so as analysts here raise concerns that a recent High Court ruling recommending the arrest of outgoing Prime Minister Morgan Tsvangirai’s lawyers on contempt of court charges could be the start of political oppression.

Tsvangirai’s lawyers, Lewis Uriri, Alec Muchadehama and Tarisai Mutangi, filed a Constitutional Court application on his behalf seeking to nullify Zimbabwe’s Jul. 31 polls, saying it did not meet the Southern African Development Community’s (SADC) minimum standards for a fair vote. They argued that the election was conducted without media and security sector reforms, and that widespread vote rigging had occurred.

Tsvangirai also filed two urgent petitions with the Zimbabwe High Court to access the election results to use as evidence in his Constitutional Court challenge. He is alleged to have questioned the integrity of the judiciary in these petitions.

The High Court did not rule immediately on the matter and on Aug. 16, a day before the Constitutional Court hearing, Tsvangirai withdrew his challenge as he felt he would not receive a fair hearing without the requested voting material.

However, on Aug. 20 the Constitutional Court proceeded with its ruling, saying constitutionally there was no legal tenet to allow withdrawal of the case.

And also on Aug. 20, Bhunu ruled against the two petitions filed by Tsvangirai to access the election records, and recommended the arrest of the outgoing prime minister’s lawyers.

However, Douglas Mwonzora, spokesperson for Tsvangirai’s party, the Movement for Democratic Change-Tsvangirai (MDC-T), told IPS they were not surprised by the Constitutional Court ruling and were now exploring other political means to object to the election outcome.

“Although we sought to withdraw our election challenge, the court could not allow us to do so. We are not surprised by this ruling because we saw it coming after we were denied access to voting material used on election day, which we wanted to use as evidence to prove our case of massive vote rigging by [Zimbabwe Africa National Union-Patriotic Front] Zanu-PF,” Mwonzora told IPS.

“The court just proceeded with Tsvangirai’s case as a way of legitimising the veteran ruler’s disputed re-election. If the MDC-T had been allowed to withdraw [its case], Mugabe could have faced a legitimacy crisis in the southern African region,” Dliwayo told IPS.

Human Rights Watch’s senior researcher for the Africa division, Dewa Mavhinga, said the Constitutional Court ruling means that the MDC-T will have to raise their grievance with regional bodies.

“The court ruling leaves the MDC-T leader with options to pursue regional and international legal remedies, including with the [African Union’s] African Commission on Human and Peoples’ Rights,” Mavhinga told IPS.

However, the MDC-T may not have any success with SADC. Mugabe’s victory was legitimised at the SADC heads of state summit in Malawi on Aug. 17 and 18. Mugabe had been welcomed by loud cheering and two standing ovations.

Current SADC chair, Malawian President Joyce Banda congratulated Mugabe on his country’s peaceful elections and pledged the organisation’s complete support. At the summit, Mugabe was appointed deputy president, and the next summit chair, of the regional body.

“Clearly, the MDC-T may be fighting a losing battle. Mugabe now clearly heads SADC considering his political seniority to Banda, who may be soon taking instructions from the aged veteran politician. This puts the MDC-T in a difficult position,” independent political analyst Malvern Tigere told IPS.

Meanwhile, pro-democracy activists say they are disturbed by SADC’s endorsement of the election.

“SADC failed Zimbabweans and set a wrong precedent for democratic elections here, which kills people’s hopes of changing things through an electoral process,” Thabani Nyoni, spokesperson for the Crisis in Zimbabwe Coalition, an amalgamation of 70 rights groups here, told IPS.

Claris Madhuku, director for Platform for Youth Development, a democracy lobby group here, told IPS: “Now Mugabe has been legitimised by both SADC and the Constitutional Court here. He will become more confident and will be more stubborn … on the basis that he has been given legitimacy.”

It paves the way for Mugabe to be sworn into office on Thursday, which has been declared a public holiday here.