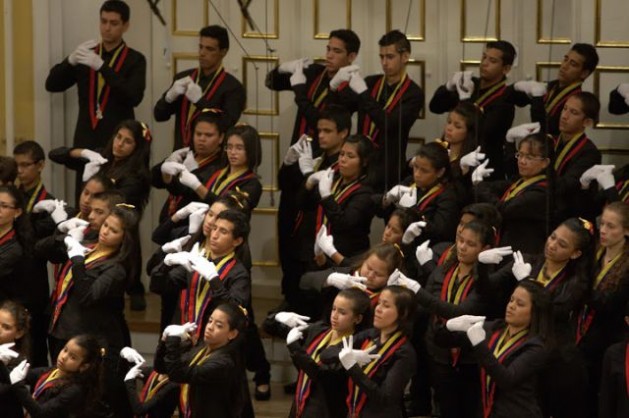 SALZBURG, Austria , Aug 9 2013 (IPS) - A sea of white-gloved hands swaying gracefully to the rhythm of tropical music shows the audience in the hallowed Mozarteum concert hall in this Austrian city how Venezuela is combining musical education and social inclusion.

The White Hands Choir made its international debut Thursday as one of dozens of ensembles, eight of them from Venezuela, at the Salzburg Festival, the music and theatre fest held every summer in this city in honour of its most famous son, composer Wolfgang Amadeus Mozart (1756-1791).

It is made up of 120 children and young people, some of whom raise their voices in song while others execute an imaginative choreography of flowing hand movements, accentuated by their white gloves.

The distinctive feature of this choir is that dozens of its members are youngsters with visual, auditory, motor or cognitive disabilities, and it has been organised by the Venezuelan National System of Youth and Children’s Orchestras, widely known as “El Sistema”, to include them in its project to combat poverty and exclusion.

“For us, participating in the festival marks a before and after,” Jessica Montes de Oca, in the front row of the white-gloved section of the choir, said in sign language. “It’s exciting to perform in the city where Mozart was born and to show that deaf people can make music. We are breaking down barriers.”

With their dark uniforms providing contrast for their gloved hands, the choir was loudly applauded from the start of their programme, which began with sacred music like British composer John Rutter’s “Ave Maria” and Argentine musician Athos Palma’s “Gloria”.

The ovations were louder still when they presented Venezuelan pieces like “Canto a Caracas” (Song for Caracas) composed by Billo Frómeta, “Los dos gavilanes” (The Two Sparrowhawks) and “Las cosas bellas de Lara” (The Beauties of Lara) by Adelis Freites, and “Alma Llanera” (Soul of the Plains) by Pedro Elías Gutiérrez, usually their final number.

Members of the audience, who paid up to 65 euros (86 dollars) for tickets, cheered, clapped, called for encores and were visibly moved to tears.

In the orchestra section, giving a rapturous standing ovation and waving his hands in imitation of the children in the choir, was Spanish tenor Plácido Domingo, seated beside the creator and conductor of El Sistema, the musician and economist José Antonio Abreu.

“Congratulations. I am astonished by what began with nothing but a teacher’s great love and lifelong dedication,” Domingo told the press.

El Sistema got its start in Caracas in 1975, in a basement parking garage where Abreu began to rehearse with a dozen teenagers. He described the social goals of his movement, which now involves some 400,000 children and young people in nearly 400 orchestras and choirs in 280 free music schools throughout Venezuela.

“This is not just an artistic endeavour, but basically a social programme aimed at fighting poverty and marginalisation. A total of 400,000 families are involved in this programme to combat poverty, because poverty is not only material but spiritual, and the most terrible poverty is the lack of an identity,” Abreu said in a recent interview with IPS.

Naybeth García, the White Hands Choir director, said on the eve of its Salzburg performance that “there are now exactly 2,004 children and young people with disabilities participating in El Sistema choirs, the result of educational work begun 20 years ago to educate and integrate people with and without disabilities.

“It is not about integrating with normalcy, but about making integration normal. We have people with disabilities who can teach us about music and life, and offer food for reflection to those of us who do not have those disabilities,” said García.

John Jairto Rojas, who has limited motor and language skills, said “I enjoy it all, but if we had not worked hard we would not have been able to come here, and show that a wheelchair is not a barrier.”

Alfredo Briceño, a young man who does not share the disabilities of some of his fellow choir members, joined the programme because of his musical interests and also out of friendship: as a child he studied with Gustavo Flores, a blind engineer who is married and has two children, who fills multiple roles in the group as a tenor, keyboard player and enthusiastic supporter.

Experiences like this week’s, which brought 1,400 musicians on tour from Venezuela, are an ideal opportunity for Venezuelans to showcase the orchestras of El Sistema as a means of perfecting and renewing music, but also of seeking new pathways for social integration.