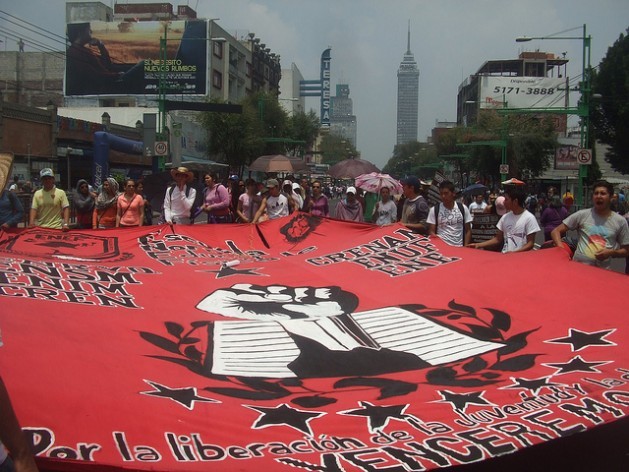 Students and teachers from a physical education school in Michoacán take part in protests in Mexico City. Credit: Daniela Pastrana/IPS

MEXICO CITY, Sep 12 2013 (IPS) - On his first day of fourth grade, Efraín found there were no desks or benches in the classroom in his Mexico City school. His parents had to help the teacher haul in furniture from other rooms so the children wouldn’t have to start the new school year sitting on the floor.

That day, Aug. 19, Efraín’s mother found out about the suspension of the swimming programme that served 15,000 public school students in the capital and had functioned successfully for 10 years.

She also learned of the start of teacher protests, which culminated in a national teachers’ strike on Wednesday Sept. 11.

“Being in the swim programme was a privilege for your children,” a public ministry official told the parents who demanded an explanation.

The parents didn’t know it, but the disappearance – by presidential decree – of the general directorate of physical education was merely the start of a series of changes in public education, planned by the conservative government of Enrique Peña Nieto.

The reforms have triggered an insurrection by teachers in roughly two-thirds of Mexico’s 31 states.

The problem is not a shortage of funds for education. The educational system, which serves some 26 million primary school students and 4.3 million secondary students, receives 17.5 percent of the federal budget.

But 93 percent of that goes to salaries of teachers and other staff according to “Education at a Glance 2013” by the Organisation for Economic Cooperation and Development (OECD), the so-called “rich countries’ club”.

The report says that is the highest proportion among OECD countries, which include Mexico.

Efraín’s school is in the Benito Juárez borough in the capital – the municipality with the highest level of human development in the country, according to the United Nations Human Development (UNDP) index.

That means he is better off in terms of school conditions than children in the rest of the country.

To get to the bilingual school he heads, Raymundo Carrera has a four-hour walk every Sunday and crosses the Presa Miguel Alemán lake by motorised canoe in the region of Tuxtepec in the impoverished southern state of Oaxaca, which has a high concentration of indigenous people.

The 50-year-old, who has been a teacher for 26 years, lives in a hut with a tin roof and a dirt floor.

“That’s what the community gives you, and you get used to it. We also join in the local harvests and fiestas,” Carrera told IPS as he took part in the protest camp that teachers have set in the Zócalo, Mexico City’s main square.

Oaxaca is Mexico’s second-poorest state, according to the UNDP Human Development Report 2010.

Teachers from Oaxaca make up the biggest delegation among the 15,000 teachers protesting in Mexico City since Aug. 19 against a series of laws restricting their labour rights. Their roadblocks have exacerbated the chaos of downtown traffic for nearly a month. The teachers have also occupied public buildings, blocked the Mexico City international airport for several hours, and seized toll booths on highways.

On Wednesday, protesters clashed with anti-riot police as they tried to approach the presidential residence.

The laws were approved by Congress last week and signed into law by the president on Tuesday.

But news on the issue was overshadowed by the scandal of the arrest of Elba Esther Gordillo, the lifelong leader of the teachers’ union and one of the country’s most powerful political leaders.

Gordillo is in prison, charged with embezzlement and organised crime.

The protesting teachers form part of a dissident faction of the Sindicato Nacional de Trabajadores de la Educación – the national teachers union – which has 1.2 million members among primary and middle school teachers.

But after the laws were passed, the protesters were joined by other unions, and the movement grew in strength until declaring Wednesday’s national strike.

The laws, which are focused on primary and secondary education, introduce mandatory periodic teacher evaluations. In addition, teachers will be recruited through open tests, starting in 2014. There are also changes to the systems of promotions, wages, benefits, and working conditions in different states.

But critics say the evaluation system is vague. They also complain that their concerns were not taken into account by the legislators, and that the reforms do not take into consideration the specific challenges of teaching children from disadvantaged backgrounds, as well as indigenous children, many of whom do not speak Spanish.

Mexico’s native population is variously estimated to make up between 12 and 30 percent of the country’s 112 million people (the smaller, official, estimate is based on the number of people who actually speak an indigenous language).

Furthermore, the protesters argue that the reform paves the way for the privatisation of the education system in Mexico.

The trade unionists are calling for an autonomous national institute to carry out evaluations. An institute was created in 2002, but it is not independent.

“This is a labour reform, not an educational one, and it did not arise from a negotiated consensus,” Raymundo Vera, a teacher from the Oaxaca committee, told IPS.

Promoters of the reform, spearheaded by business leaders, have complained about the high proportion of education expenditure that goes towards salaries.

“I do want to be evaluated, but who will guarantee that they’re going to do it properly, and not like they have up to now, with standardised tests that do not take into consideration the conditions at each school?” asked Carrera.

Teacher evaluations, which were introduced in 1989, were held up by the presidency of Felipe Calderón (2006-2012) as an indication that quality was improving.

But few advances have actually been made on that front.

The “2012 Panorama educativo de México” (Mexican Educational Outlook), by the National Institute for Evaluation of Education (INEE), found that half of the students in the first three years of secondary school were unable to solve mathematical problems involving two or more operations.

The same study, which measures advances made between 2006 and 2010, shows that primary students in urban public schools improved in Spanish, while the proportion of indigenous students who under-performed in Spanish had risen to nearly 50 percent.

“The people complaining about our protest marches do not and will never understand our living conditions,” he said.

In Mexico, only 56 percent of young people between the ages of 15 and 19 are enrolled in school – the lowest rate in the OECD.

INEE statistics from the “Panorama educativo de México”, presented in April, show that 4.8 million children and adolescents in Mexico do not go to school.