This article is the second of a two-part series exploring disability’s place in international development guidelines. In part one, IPS looked at the repercussions of ignoring disability on an international level. Part two asks: was the lack of attention simply an oversight or due in part to the complex nature of disability? 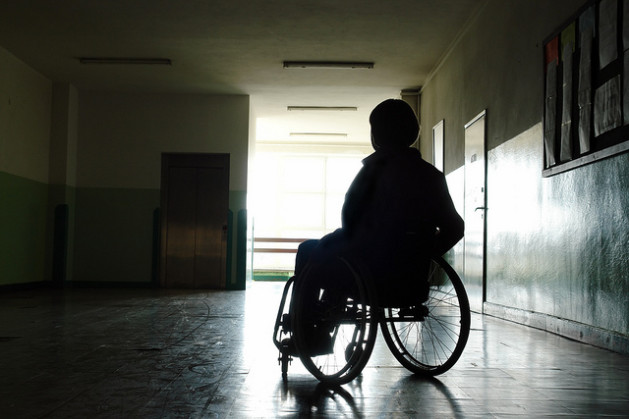 The media and public perception play a role in how different conditions are treated and how the disabled view themselves. Credit: Bigstock

UNITED NATIONS, Oct 2 2013 (IPS) - When U.N. Secretary-General Ban Ki-moon opened a recent high-level meeting on disability and development that promised a place for the issue in the post-2015 agenda, he cited three examples of incapacity.

All three were stories of children or adolescents, even though the World Health Organisation estimates nearly 200 million adults have a functional difficulty.

When aid is “solutionist", it only looks for problems where data lies, like the drunk who searches for his keys under a streetlamp and not where he dropped them.

Ban’s comments illustrate what many see as a key difficulty in representing disability, both in language and in the democratic decision-making process.

Activists say the lack of attention at the international level is not simply an oversight but a product of a confused conception of disability and the unique experiences of different groups of disabled people.

The reality, they argue, is that certain classes of disabled people coincide more easily with the orientation of international guidelines for healthcare intervention and with public understanding of health.

A dominant assumption in interventions is that “we save people because when we save them they are going to have a full life and produce a lot, so society benefits,” said Bruce Jennings, director of bioethics at the Centre for Humans and Nature and a lecturer at Yale University.

Saving lives means a country will have a more reliable workforce, a guarantee of vital importance in places like Sub-Saharan Africa where populations have been ravaged by HIV/AIDS.

But a focus on mortality puts those with severe and cognitive disabilities in a precarious limbo.

“What is the rationale for spending a great deal of resources for supporting the quality of life of people with severe cognitive problems when the usual answer our society gives for spending resources in healthcare is future productivity?” Jennings told IPS.

In developing countries, where 80 percent of the world’s disabled live, social integration and sustained healthcare for them can be financially unpalatable to governments when set alongside well-subsidised international measures that focus on vaccines for polio or cutting edge treatments for AIDS.

But for the disabled, there is often no pill to end their distress or help overcome social barriers. For severe cases, years of rehabilitation and attention from public sector healthcare are required.

“It’s perceived as quite costly to provide care and support but equally it’s a moral and legal issue that you have to look into.”

As is true for many activists, those with first-hand experience of disability are often the clearest voices for progress.

“We need to include people with disabilities not just as the beneficiaries but the participants,” said MP Reen Kachere, minister of disability and elderly affairs in Malawi.

Participation is especially important in developing countries, said Kachere, where international projects have to navigate the historical question of paternalism.

“The disability advocacy community has very much been oriented towards inclusiveness and participation of individuals with impairments in the decision-making processes,” Jennings said.

A common refrain among advocates is “nothing decided for us without us.”

But participation raises the question of representation, he said.

“I’m not sure someone who has experience living in a wheelchair is a good representative for someone with cognitive impairments,” noted Jennings.

Because of how varied conditions are, differences arise in how integrated the disabled feel in society.

“It is relatively easier for a person who is blind or a person with physical disability to access services, but there is much more stigma attached to cognitive disabilities,” said Gopal Mitra, a programme specialist for children with disabilities at UNICEF.

“Disability is not a homogeneous group,” he told IPS.

The media and public perception play a role in how different conditions are treated and how the disabled view themselves.

In the United States, victims who lost limbs when bombs went off at the Apr. 15 Boston marathon have received millions in crowd-sourced medical care. At the same time, more than 50,000 U.S. diabetes patients undergo lower extremity amputations each year. Worldwide, someone loses a leg to diabetes every 30 seconds. All of them will require lifetime care.

Images of children or victims of a tragedy are easier to digest for the public than those whose descent into incapacity is slow or genetic. Physical disabilities are easier to understand than mental ones, and as a result societies are more likely to allocate money to that which they can comprehend, said Jennings.

“There is an image of the disabled as being physically limited and cognitively sound,” he said. “By having the public have a person in a wheelchair be the paradigm of disability in their mind and thinking that we deal with disability if we have wide doors and lifts on public buses is an unfortunate mistake.”

Even as organisations catch up with contemporary theory on the fluidity of gender and sexual orientation or the vastness of the disability spectrum, their efforts can still be constrained.

The problem, as disability activists see it, comes in large part from the total lack of language concerning the disabled in U.N. Millennium Development Goals (MDGs). See Part One

The result can be a self-perpetuating cycle.

“Countries are not tracking and reporting progress on children and adults with disabilities as far as MDG achievements are concerned,” said Mitra. “Countries are not connecting data. Unless you have numbers, it is difficult to plan or allocate resources.

“However, the point is 15 percent of the world’s population is people with disability. If you don’t include this 15 percent no development goals can be achieved.”

At its worst, say critics, when international aid is “solutionist”, it only looks for problems where data lies, like the drunk who searches for his keys under a streetlamp and not where he dropped them. And disability is notoriously hard to define and track.

Though an understanding of the different forms of disability may allow society to better help, the ultimate solution may be the idea of a common shared experience.

“I think the rational is solidarity, empathy, dignity, mutuality, equality and respect,” says Jennings. “It’s very hard to put a metric on those.”