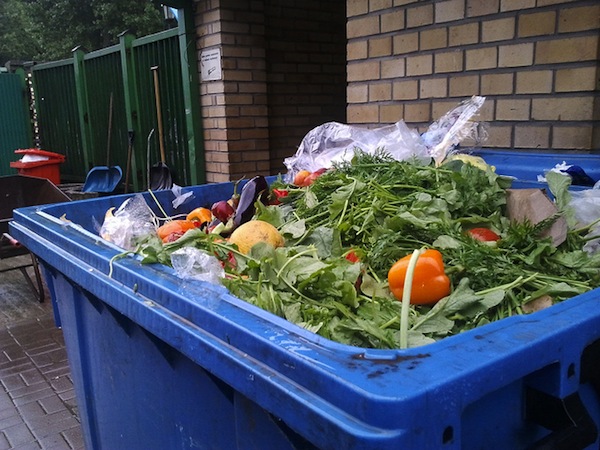 ROME, Oct 17 2013 (IPS) - If all food loss and waste around the world could be recovered, half the world’s population, or 3.5 billion people, could be fed. Yet people throw away a third of food produced globally, an issue that inspired the theme of these year’s World Food Day, sustainable food systems for food security and nutrition.

While World Food Day, held Oct. 16, set the goal of completely eliminating food waste before increasing food production, much of the global population remains uneducated and uninformed about the problem, so many obstacles must be overcome before such a feat can be attained.

“I come from a country where people don’t even try to harvest agricultural products because the price of these products is so low and the work is too hard,” Albanian chef Fundim Gjpali told IPS while working at the Food and Agriculture Organisation’s World Food Day event organised at EATALY, a slow food hub in Rome.

Today, Gjpali is fighting food waste in the land of abundance: Europe. For World Food Day, he specially prepared a dish of recovered food. “I took tomatoes, bread and Italian ricotta cheese that were about to be thrown away, and I made a very decent dish,” he said.

"In Cuba...until you have eaten everything you've bought, you don't go to the market."
-- Lesmer Oquedo Curbelo

Other countries, such as Cuba, represent the land of food recycling. “With the embargo in Cuba, we don’t have other choices,” Lesmer Oquedo Curbelo, a Cuban chef, told IPS. “A Cuban toreja, fried bread, is an example of how people could use stale bread.”

He compared food-buying practices in Cuba to those in Western countries. “In Cuba we buy food day by day,” he described. “Until you have eaten everything you’ve bought, you don’t go to the market.”

According to research by the FAO, nearly 1 billion people go to bed hungry each night. Even though food production will have to increase by at least 70 percent in order to feed a population that will reach 9 billion in 2050, the world wastes more than a third of the food that it is producing. And this waste affects everyone, regardless where they are born or live, and covers the entire food supply chain from the farm to the table.

According to FAO estimates, in developing countries, food waste tends to occur upstream of the food chain (six to eleven kilograms per capita in 2010), meaning that the food is lost just after production. In developed countries, however, loss occurs downstream, or in distribution, catering and domestic consumption (95-115 kilograms per person).

“While in the western world we only talk about the waste, in the developing countries the buzzword is the food loss,” Andrea Segrè, director of the Department of Agro-Food Science and Technology, University of Bologna and president of Last Minute Market, told IPS. Food waste differs from loss in that waste is literally throwing away food, while loss is due to a lack of storage. Many developing countries have plenty of food but no way to preserve.

“In India, for instance, the problem is not the lack of food but the storage,” explained Italian Minister of Foreign Affairs Emma Bonino. She stressed that regardless of personal habits, people must be aware of different ways to reduce food waste.

“On an individual level, we are supposed to think about the size of our food portions. We should also think about what and where we are buying food,” José Graziano da Silva, director-general of FAO, told IPS.

Andrea Segrè described to IPS a Last Minute Market, a spin-off society founded in 2000 that implemented the first professional system of recycling the unsold food of big distributors by filling in the gap between supply and demand. LMM doesn’t directly manage unsold food, instead offering services to prevent and reduce the production of waste.

“But our goal is to close the LMM, because we want to reach zero food loss,” Segrè added. “In that kind of world, we are not going to need projects like LMM.”

Federico Spadini from OXFAM Italy, offered IPS five ways people can help alleviate this issue: reduce the consumption of meat and dairy products, reduce food waste, be aware of how much water and electricity one uses while cooking, eat seasonal products, and sustain small farmers instead of corporate agriculture.

An estimated 800 million people working in agriculture around the world live below the poverty line, and approximately half of the world’s inhabitants who suffer from hunger are smallholder farmers.

“Supporting smallholder farmers will go a long way toward alleviating food insecurity and increasing incomes where most needed,” says Ellen Gustafson, co-founder of Food Tank, a non-profit working in environmentally sustainable ways to alleviate hunger and other food-related ailments.

Peruvian chef Elsa Javier, who deals primarily with ethnic food, has been devising creative ways to reduce food waste, such as by combining Italian Mediterranean food and Andean biodiversity.

“If we add Andean quinoa to Italian vegetable soup, you’ll have a perfect combination and this dish might last much longer than an ordinary one,” she explained to IPS. “In order to fight food waste, we have to unite gastronomic cultures. Ethnic food in developed countries is completely wasted and underestimated by the locals. So by unifying food cultures, we might help stop this kind of food waste.”

Others have turned to technology to combat food waste. ICT4G (ICT for Good), an Italian group that uses technology to foster economic and social development, has developed a smartphone application called “Bring the Food” that facilitates food donations.

“If I have a restaurant, thanks to this application, I can spread the word that I have, for instance, ten boxes of unsold pizza,” Pietro Molini, an  ICT4G collaborator, told IPS. “Our app users are mostly charity associations but also individuals not necessarily belonging to lower classes.”