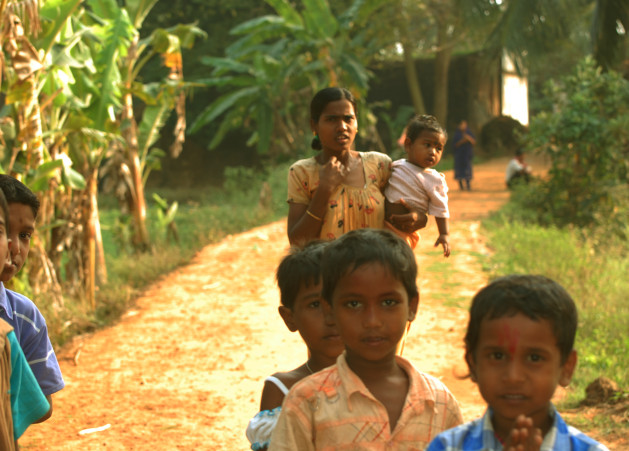 Children at a care home in Orissa in India. Children worldwide are particularly vulnerable in disasters. Credit: Malini Shankar/IPS.

DEHRADUN, India , Oct 2 2013 (IPS) - In Uttarakhand, the small Indian state in the Himalayan foothills that was a victim of flash floods that killed at least a thousand people in June this year and uprooted thousands of families, the story is told of a child who went every day to the helipad, believing his father will return when, in fact, the father died in the floods.

There are many such stories, Ray Kancharla of Save the Children told IPS.

Children are the most vulnerable when natural calamities strike. Children, women, the frail and infirm, and the elderly need special care and attention in disaster zones. Often they are unable to cope with the aftermath of a disaster, even if they have survived it, and might not be able to access search and rescue personnel, food aid, or relief material.

Separation is a trauma peculiar to children. Search and rescue workers, because of the emergency nature of their work, tend to be hurried. Often they do not have the time to check how many members of a family or group are still missing. Only visible survivors are picked up and evacuated to scattered shelters. Reunification becomes the task of disaster managers and relief agencies.

In January 2010, an earthquake struck Papua New Guinea, the small island state in the Pacific Ocean, and all the fatalities reported were helpless children because training in ‘disaster risk reduction’ had equipped adults with the knowledge that when the sea withdraws it heralds a deadly tsunami.

“No adult died because adults knew that when the sea withdraws [from the shore], it portends the arrival of a tsunami, and all the adults fled to higher ground,” said Aloysius Laukai of the New Dawn FM radio station. “The unfortunate casualties were all children,” Laukai told IPS.

“Mapping of the frail, infirm and elderly is very important in any disaster-prone area,” Aapga Singh of HelpAge India, an NGO dedicated to the elderly, told IPS after the Uttarakhand flood disaster. “It would not only be helpful to rescue these people in an efficient manner during emergencies, but also in relief disbursal; vulnerable people are either left behind or get in last.”

There are instances of children being separated from their parents and families during every recent natural calamity. The December 2004 Asian tsunami saw a seven-year -old girl separated from her family for nearly eight years before she was reunited with them in Sumatra in Indonesia only in 2012.

Even if public memory is short, trauma to the survivors can last a lifetime. Lessons learnt have to be documented in public domains to avoid recurrence of disasters in calamity-affected landscapes, say activists.

Trauma in children manifests itself in ways such as “thumb sucking, bedwetting, clinging to parents, sleep disturbances, loss of appetite, fear of the dark, regression in behaviour, and withdrawal from friends and routines,” Murali Kunduru of Plan India, an NGO, told IPS.

With loss of appetite manifesting in children suffering from separation-induced trauma, the significance of culture-sensitive food security assumes critical importance.

Apart from the primary trauma of separation, and battle for survival against the power of calamities, women and children are particularly vulnerable to lack of water and sanitation.

”Without adequate nutritious food, both children and adults lose immunity and become predisposed to water-borne infections and sicknesses like “diarrhoea, cholera, typhoid, respiratory infections, skin and eye infections which are all likely to occur when water supply and sanitation services are disrupted during disasters,” adds Kunduru.

When nursing mothers are rendered homeless because of disasters, they need to be housed in shelters which have gender sensitivity and adequate privacy. Similarly shelters need to conform to the needs of physically challenged persons – ramps for wheelchair-bound refugees have to be factored in during their construction.

In the Uttarakhand floods, the tourist economy was hit so hard that people dependent on tourism for their livelihood migrated to larger cities and towns in the plains to seek employment.

With women moving out of kitchens to supplement family incomes being earned by their young wards, children’s nutrition suffers.

“As part of our working paper on development-induced displacement we found that around 25 percent of children had to drop out of school. This is one of the risks to the population due to displacement,” writes Dr. K Hemalatha, a community worker, in a working paper on development-induced displacement, co-authored by Fr. Arun Anthony and Pitambari Joshalkar and published by Christ University, Bangalore. The study was funded by the International Federation of Catholic Universities.

Often the lack of inclusivity rebounds on the vulnerable during disasters. Planning can go a long way in efficient disaster mitigation. Database management of population, knowledge of consumption patterns, standards of living and human development index have to go into planning to mitigate the effect of disasters, particularly on children and the vulnerable in calamity-prone areas, say activists.