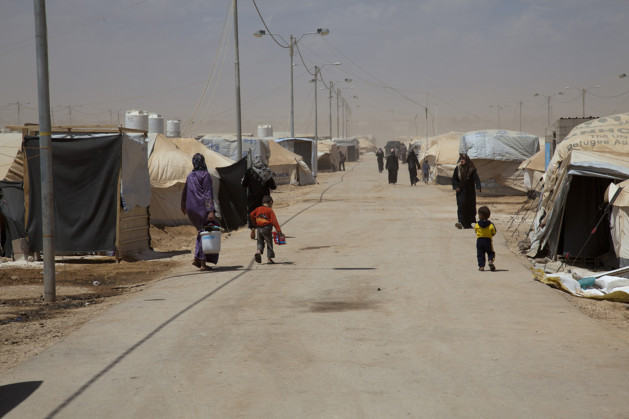 This road through the Zaatari refugee camp has been named Champs Elysées. Arab men come scouting around here for virgins. Credit: Liny Mutsaers/IPS.

ZAATARI CAMP, Jordan, Nov 6 2013 (IPS) - Amani has just turned 22. Two months ago she fled from the civil war in Syria and left her house in capital Damascus. After a dangerous nightlong trip she arrived at Zaatari, the refugee camp just over the border in Jordan, where her parents and two sisters had already lived for over a year.

In Damascus she had lived together with her husband and five children in an apartment in the old city centre. Like many Syrian girls she got married when she was still a child. She had just turned 15 when she found the man of her dreams and decided to wed.

“In Syria things are different,” she tells IPS. “Girls get married very early; it is a tradition. But it doesn’t mean we are all married off to strangers. I got to choose my husband and he got to choose me. We could never be more happy than when we were together.”

Five children later, the civil war broke out in the country she loved but whose unfair policies and corrupt government she disliked. Living in the capital where the government of President Bashar al-Assad was still in control did not make life easier for her and her family.

Her husband took up arms from the first days of the armed revolt and joined the Free Syrian Army. Soon, he became leader of one of the biggest battalions fighting the regime in Damascus.

Amani herself was also fighting with the rebels, despite the five children she had to look after.

“Women aren’t as strong as men, but sometimes they are more strategic. One can’t work without the other.” But a deadly attack on their apartment killed her husband and four of her children.

Amani escaped and only managed to save her youngest daughter.

“When I heard the regime’s air jets approaching, I hid my little daughter underneath the sink of our kitchen. She just fit in the small space next to the garbage. She was just a baby. The other kids had run to their dad to seek protection. And I, in panic and to see what was going on, ran into the street.

“Seconds after reaching the street an explosion destroyed the entire house. Within the debris I could only find my little baby.”

After the tragedy, Amani took the dangerous trip from Damascus to the refugee camp. But life in Zaatari was anything but a respite.

“We are locked up like monkeys in a cage. The moment you walk into the camp, there is no way out any more.”

The camp is overpopulated. A sea of tents spans 3.3 square kilometres, accommodating 150,000 refugees – three times the number it was built for almost two years ago.

The artificial settlement in the middle of a dry desert is afflicted by sandstorms and disease. The little humanitarian aid that makes it to the camp cannot reach all the people who need it. Those who want bread, or blankets to protect themselves against the bitter cold, have to buy them from the few individuals that receive this aid for free, and then sell it illegally.

An entire underground economy has taken root in the camp. The struggle for food is fierce, and only a lucky few earn enough money to sustain a family.

“I work seven days a week, at least 10 hours a day, for an NGO that takes care of the smallest children here in the camp. After working an entire week, I get three dollars. With an ill mother, an elderly father and a baby to take care of, this life is untenable,” Amani says. “My older sister and her husband still have all their children, thank god, but this means five extra mouths to feed.”

Nourishing a family of ten with only three dollars a week quickly became impossible. Amani brought her younger sister, Amara, to work at the same NGO. But doubling the income was still not enough to take care of all of them.

There was only one way to get money quickly, a route that many families took before Amani did – and that was to as good as sell one of the girls. Amani sent off her younger sister Amara, 14, to some sort of marriage.

“It isn’t rare in Syria to marry at the age of 16. Most Arab men are aware of this, and often come to Syria to find a young bride. These days, they come to find them at the camps, where almost everybody is desperate to leave.

Amani says she had no choice. “I knew she wasn’t in love, but I also knew that he would take care of her. I would have sold myself, but Amara was the only virgin in our family. We had to sell her, in order to allow the rest of us survive. What else could I do?”

Amara was married to a Saudi man that passed by their tent and asked her father for her hand. That was after he had met Amani, who had told him of the family’s financial desperation and that her younger sister was still not married off. With this marriage Amani secured critical money for her family – at least for the time being.